After taking a hiatus in 2020 due to the pandemic, the Austin City Limits Festival cautiously returned to Zilker Park to celebrate its 20th year.... 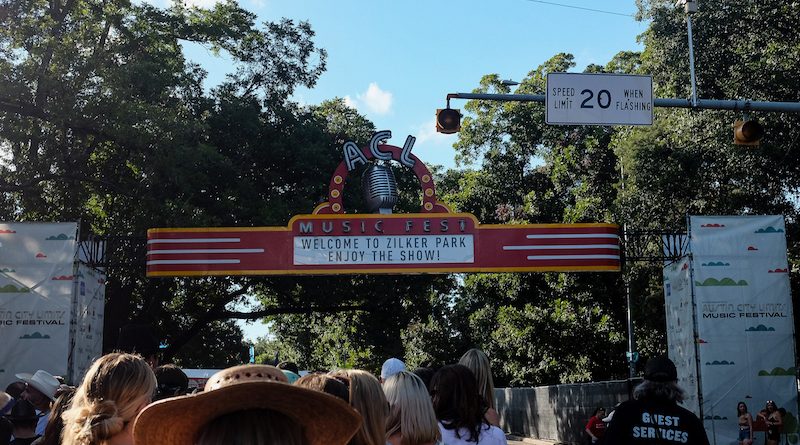 After taking a hiatus in 2020 due to the pandemic, the Austin City Limits Festival cautiously returned to Zilker Park to celebrate its 20th year, for another two Friday-to-Sunday weekends, October 1st-3rd & 8th-10th. In the weeks leading up to the event, ticket holders anxiously awaited to see if the fest was going to happen, but as the permit process ramped up with the City of Austin, COVID cases began to decline, which allowed the show to go on. The weather also created some anxiety leading up to the event, but the stormy forecast only affected the first day of weekend one. The rains on Thursday pushed back gate times to 3:00 PM, which caused some backups at the gate and the cancellation of the early shows such as the perennial country crooners Asleep at the Wheel, who have played every festival save this year’s weekend one. Save the few raindrops during George Straight, the sky and ground stayed relatively dry for revelers desperate to find a bit of normalcy.

The festival ramped up safety precautions including the requirement that attendees either had proof of vaccination or a recent negative COVID test, and masked up in the denser areas. Although only a fraction of the fans wore masks, it was remarkably easy to move through crowds. It appeared that after a year and a half of distancing, festival-goers were more respectful of people’s space. By 5:00 PM on Friday, fans arrived in droves to see Texas-native Megan Thee Stallion command the Honda and Miller Light side of the grounds – reminiscent of Lizzo’s overflowing crowd the previous edition (QRO recap). Fans were pumped to continue Hot Girl Summer into the fall with Megan leading a twerk off with her backup singers.

Texas artists packed this year’s line-up and one of the hottest Austin groups, the Black Pumas finally got to perform for a huge local crowd on the opposite side of the park at the grand Lady Bird Lake Stage. Dripping sweat as they stared into the setting sun, lead man Eric Burton and guitarist Adrian Quesada captivated a chill crowd who held up their hands and clapped along to the beat. The four-time Grammy nominees delivered a soulful foil to the Texas dance party engulfing the other side of the park. The highlight of the set was the finale, “Colors”, that ended in a sing-along to the refrain, “My sisters and my brothers / They see ’em like no other / All my favorite colors.”

As dusk fell on the crowd, Australian solo artist Chet Faker (formerly known as Nick Murphy) took the Miller Light Stage. Dressed in overalls and sporting a bushy beard, a spotlight illuminated and followed him as he moved from one instrument to another on stage. The minimal background put the focus on the singer’s silky vocals and laidback grooves that inspired some head nodding and swaying without much of a build-up, until he performed his version of the 1996 Blackstreet song “No Diggity” that put the artist on the map in 2012.

While ACL festival headliners typically skew towards a choice between rock veterans such as Metallica and hot hip hop artists such as Childish Gambino, the first night of weekend one featured a Texas country legend in George Straight on one side of the park and child star-turned-Madonna Miley Cyrus on the other end. The people getting their groove on to Chet Faker didn’t have far to go to see Miley’s set. Dressed in a blue ‘80s style blouse, the artist showered the crowd with affirmations and love – at one point saying that disconnecting over the pandemic has connected us even more. Her Vegas-worthy show was everything you would expect in a headliner. While her crowd was a younger demographic, her rendition of Blondies “Heart of Glass” won over the older folks in the crowd.

Interestingly, Friday night’s pairing blanketed the crowd with nostalgia and familiarity. Fans literally grew up with Miley as they watched her mature from child actor to stage performer, while George Strait served as the soundtrack to an older audience’s love span of first kisses, promising romances, and messy divorces. Cowboy hats became a common feature as festival-goers began making their way from Miley Cyrus to George Strait, where Texas pride was on full display.

The Poteet-born Texan George Strait took to the stage to “Deep in the Heart of Texas” and played nearly 30 songs during his two-hour set. Dressed in the stiffest starched jeans and shirt, the first half of the set was punctuated by a couple of classics and two songs that didn’t quite resonate with the Austin crowd, “Condigo”, a ditty that read like a commercial for a brand of liquor he owns, and “The Weight of the Badge” that would have pleased, say, a Fort Worth crowd. As King George got deeper into his set, he brought out the crowd-pleasers “Amarillo by Morning” and “The Chair” and an encore of “All My Ex’s Live in Texas” and a twangy rendition of the Tom Petty song “You Wreck Me” as folks headed out of the gates for the evening.