It was interesting to see how the pandemic has changed behavior at music festivals.... 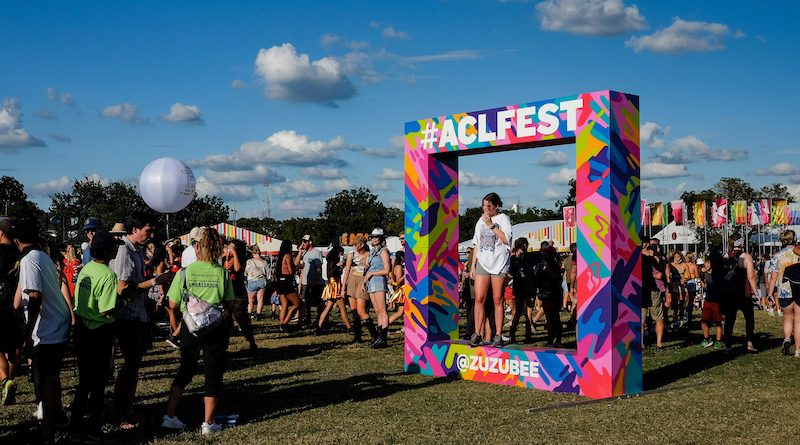 It was interesting to see how the pandemic has changed behavior at music festivals. The cityŌĆÖs risk of allowing a major festival seemed to pay off without any major issues. Sure, the masking was hard to enforce, but checking vaccines and negative tests at the door was a good TSA-style approach to alleviating fears and is the type of hygiene theater that will probably be a feature of gatherings to come. Over the course of the weekend, concert-goers respectfully distanced from each other when not near the stage. You could see pods of people on their lily pads with three-foot buffers between the next pad ŌĆō a luxury at a music festival that was not lost on this reviewer. One could simply walk through a crowd and nearly get to the front fence without trampling one another.

SundayŌĆÖs are typically slow rollers, as people tire from getting their steps in over the past two days. Those that did come early got to see Louisville garage rockers White Reaper and R&B hip-hop artist Cautious Clay. At the more intimate pecan tree shaded part of the park, Canadian country artist Tenille ArtsŌĆÖ performed a charismatic mid-afternoon set at the BMI Stage on the heels of new album Girl To Girl set to release late October 2021. Although itŌĆÖs always great to see the favorite and more established artists play at these large music festivals, seeing new and upcoming artists such as Tenille reminds us that there is still plenty of beautiful music being written, despite Pandemic times.

The festival began to really fill up for Band of Horses, who played the Lady Bird Lake Stage. Despite playing at the hottest part of the day on the Lady Bird Stage, which notoriously gets bathed in the setting sun, Band of Horses acted as though they were headlining a massive nightclub stage. Lead singer Ben Bridwell didnŌĆÖt even acknowledge the heat or look to be sweating in the hot ŌĆ£early fallŌĆØ Texas weather of the day while belting through hits such as ŌĆ£Casual PartyŌĆØ and ŌĆ£No OneŌĆÖs Gonna Love YouŌĆØ off of their last studio album, 2016ŌĆÖs Why Are You OK (QRO review).

Michigan rock band and 2019 Grammy Award winner Greta Van Fleet had a much better showing than Doja Cat during the same slot the previous day on the sun-baked Lady Bird Lake Stage ŌĆō the crowd swelled from first to last song. In just a few short years, Greta Van Fleet has become wildly popular and their live show is definitely worth catching. While their music can be said to be derivative takes on Led Zeppelin tunes, they deliver a performance that the metal gods would smile down upon. Frontman Josh Kiszka, dressed in a sparkling skin tight one-piece like Lionel Richie from his Commodores days, channels the sexiness and vocal power of a young Robert Plant on stage. His voice carried nearly the entire length of the park as they worked through a tight set of nine songs, including six from their 2020 album The Battle of GardenŌĆÖs Gate and crowd pleaser ŌĆ£Black Smoke RisingŌĆØ from their 2017 debut album From the Fires (QRO review).

DJ and producer Chris Lake might not be a household name, but he delivered a surprisingly high energy set on the Miller Light Stage before the sun began to set behind the trees. LakeŌĆÖs live rendition of the hit ŌĆ£ChangesŌĆØ turned that corner of Zilker Park into a downright dance party that usually would be reserved for a dark club. Judging by the movement of the crowd, this was perhaps the most energetic show of the entire weekend. The crowd of revelers at LakeŌĆÖs set immediately and collectively began losing themselves in his well-curated dance tracks. His performances are not to be missed.

Erykah Badu, hip-hop goddess, soul phenom and perpetual ŌĆślate is on timeŌĆÖ diva hasnŌĆÖt had a new album since 2010ŌĆÖs New Amerykah Part Two,but her long-time reputation for incredibly soul-felt shows and a flair for the extreme meant that an audience would wait all night to see her perform even two or three songs. Badu did take the stage ten minutes after her scheduled headliner start, with a variety of music from her long, illustrious career. Hits ŌĆ£Honey,ŌĆØ ŌĆ£TyroneŌĆØ and ŌĆ£Bag LadyŌĆØ closed out the night with a captive crowd of fans singing along and dancing to every word.

While a majority of the audience for the Austin City Limits Festival were born after Duran Duran reached epic stardom as English New Wave pioneers, their place in the rock canon was bolstered by the critical success of their 1993 album Duran Duran. Songs from the latter period provided the largely millennial audience a gateway to some of the band’s older synth-pop offerings. The still good looking and charming frontman Simon Le Bon, dressed in signature white pants and jacket, wooed the crowd with his avuncular velvet voice – telling the crowd after singing ŌĆś90s hit ŌĆ£Ordinary World, that, ŌĆ£This year itŌĆÖs taken on a new meaning. ItŌĆÖs all about trying to find a normal life again.ŌĆØ The twelve song set ended with mega-hit ŌĆ£RioŌĆØ that had the crowd had no difficulty recognizing and singing along as they made their way to Tyler the Creator.

Tyler, The CreatorŌĆÖs 2021ŌĆÖs release Call Me If You Get Lost intrigued many a fan to hunt down the phone number that was posted on billboards in Los Angeles to hear a recorded message of Tyler and his mother. It was a heartfelt and a unique way to garner interest for an entire showŌĆÖs production that is built around Tyler literally being lost on stage in a Hawaiian shirt and boat shoe, finding himself captaining a washed-up boat. A clever pyrotechnics show made up for the fact there wasnŌĆÖt water in which Tyler could navigate. In addition to the impressive stage production the artist masterfully delivered 2021 tracks such as ŌĆ£CorsoŌĆØ and ŌĆ£LumberjackŌĆØ that hit just as hard as his established successes ŌĆ£YonkersŌĆØ and ŌĆ£OldieŌĆØ.