It was a big Saturday at Austin Psych Fest.... 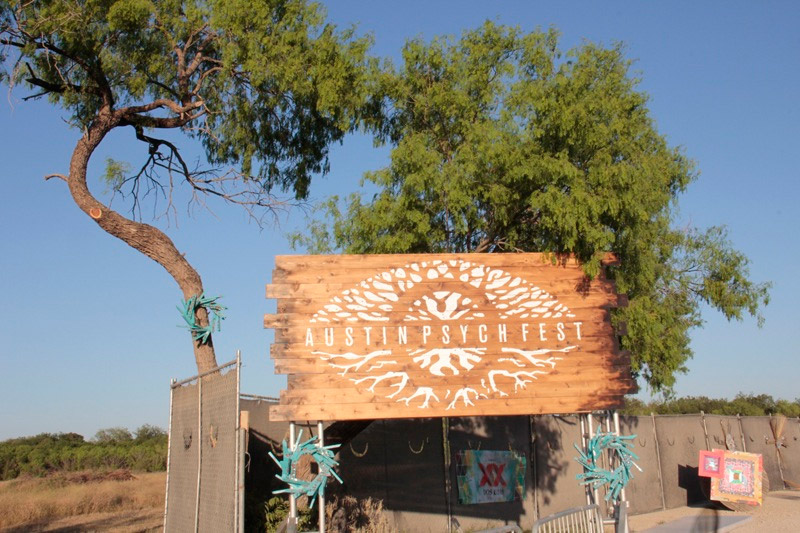 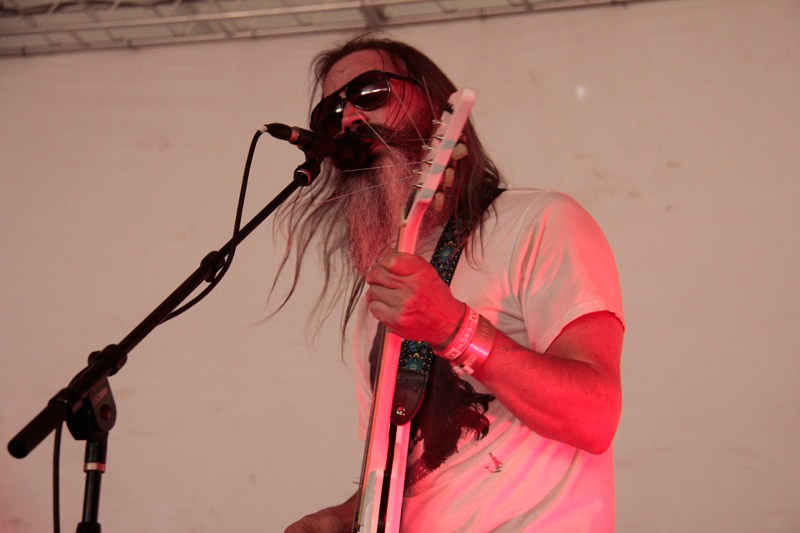 Ripley Johnson is three albums removed from Wooden Shjips. The music of Moon Duo has evolved and mutated into a new and expanding sound. It’s become a very keyboard-heavy groove with sinister overtones. Seeing the show in person was more the feel of a dance party and less feel of the Tangerine Dream jam, but I so enjoy seeing Johnson’s stage groove. 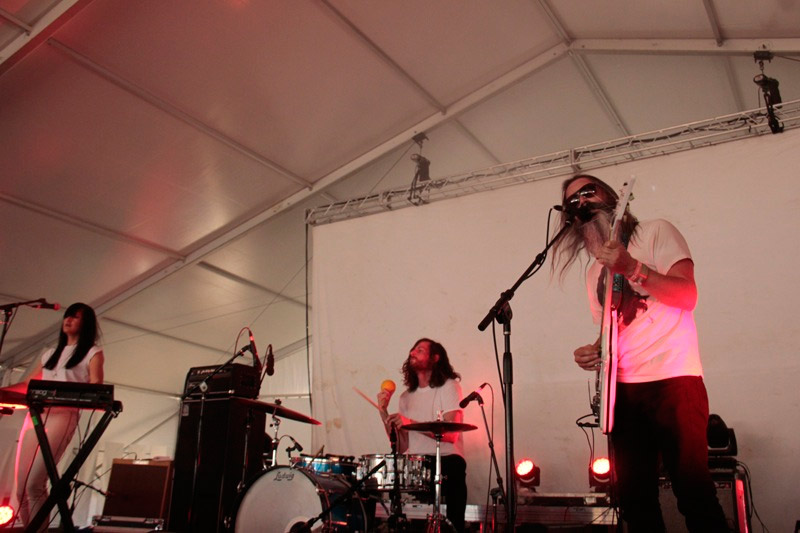 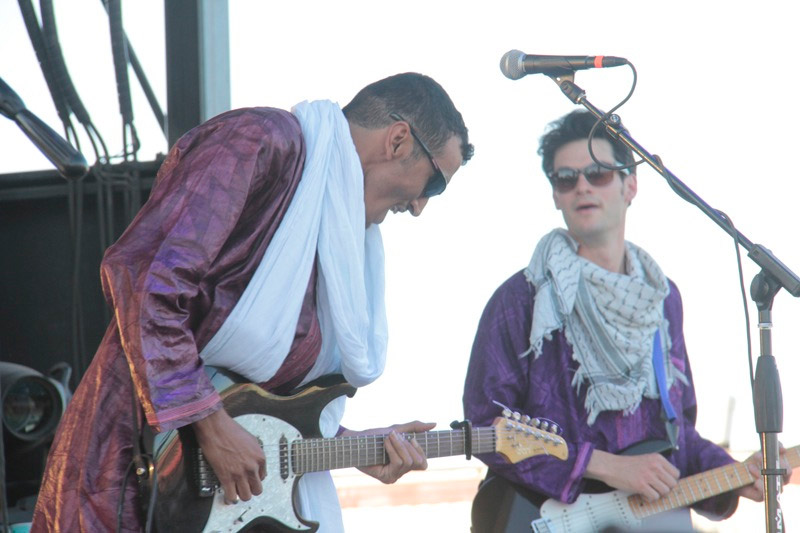 The stage was graced with a tall thin man wearing a bright purple grandora, and his guitar broadcast a chord progression that seemed a bit different from the other festival music. The Tuareg musical roots were not clear from the opening, and then he was joined on stage by other musicians who added a few ear-friendly guitar licks to the tunes.   Displaying credible guitar chops and a bold stage presence, the guitar troubadour from Niger captured the curiosity and respect from the audience. It was a great performance that drew a few more people out and brought curiosity to a whole lot more. It’s good that the audience quickly discovered why Eugene Hutz from Gogol Bordello and Robert Plant have shared such enthusiasm about Bombino’s music. 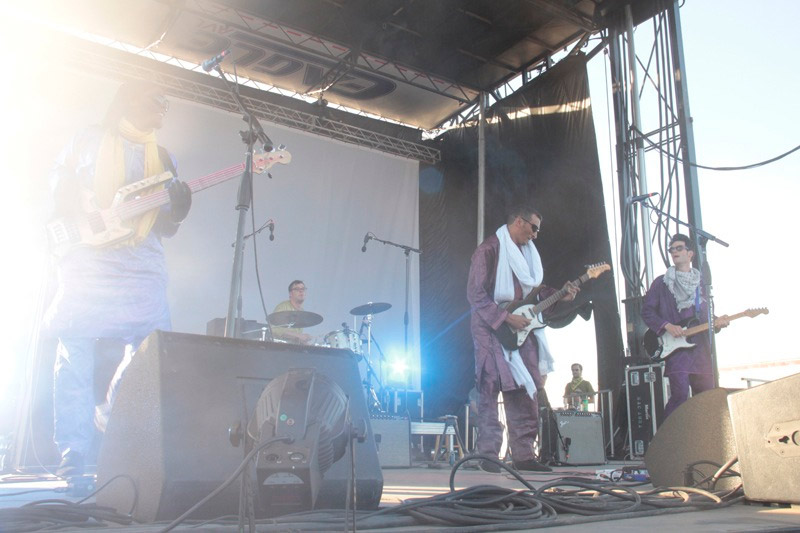 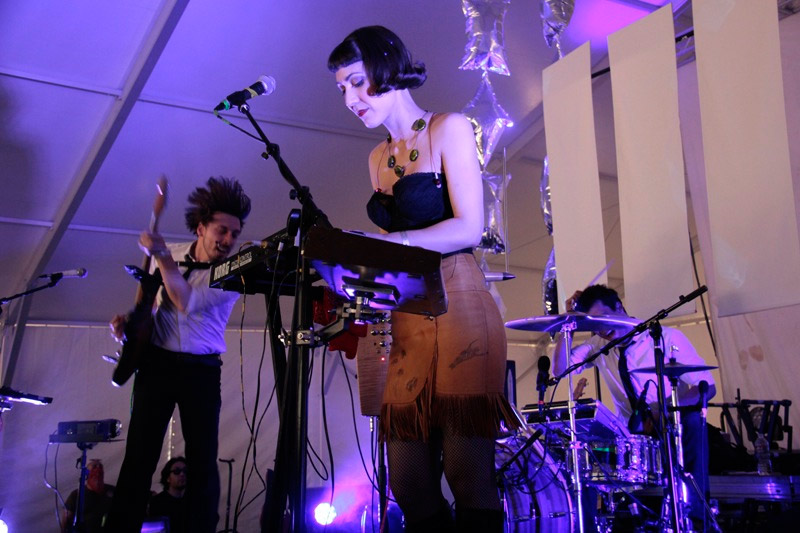 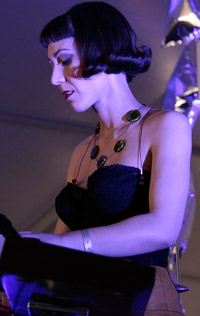 Several friends had warned me about this band, so I had lofty expectations of what was to come. Nothing, but nothing could have prepared me for the experience of The Octopus Project. The seemingly peaceful appearance of three guys in dress shirts and ties seemed tame, and then they’re joined by a woman (Yvonne Lambert) with a retro flip hairdo. Once the musical engine started, the trippy lights and imagery behind them, the sound started to spin around the room. From there, on the room became a sonic ride on a carnival scrambler. Between those brief song breaks some instrument exchanges between Josh Lambert, Ryan Figg and Yvonne Lambert happened, my head was still spinning from the previous song. Lambert reached for the theremin with a cat-claw hand and the theremin spoke back with a precise scream. Sudden bursts of percussion, industrial bassline, and pounding guitar were added, and then electronic cries and squeals quickly absorbed me in the musical thrill of it all. 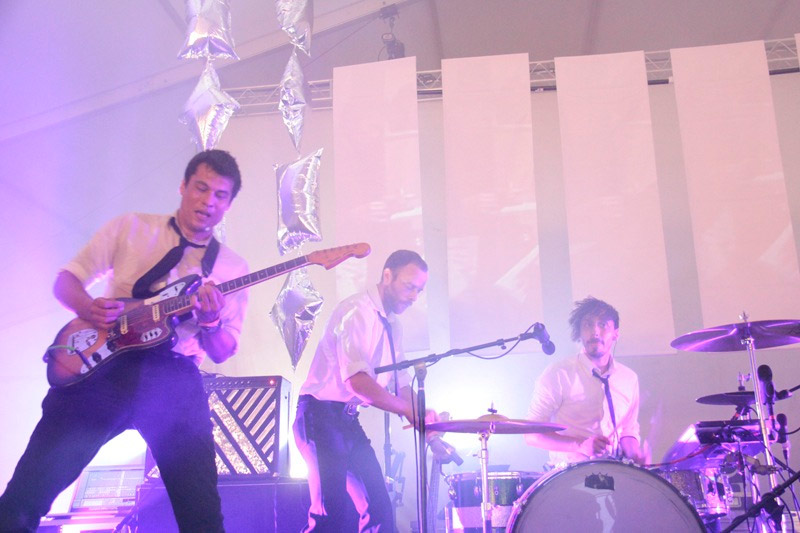 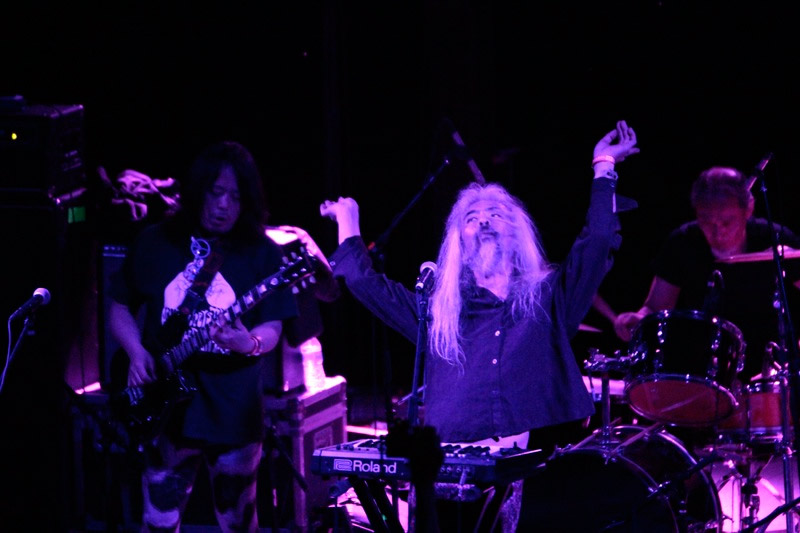 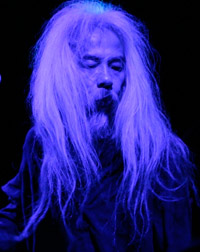 Visual images were cast across the river to a screen of trees, and green pointer lights were cast to nearby trees giving the effect of luminescent bugs. This pastoral scene is appropriate setting for many bands to take the stage, but this scene seemed so inappropriate for Acid Mothers Temple! A sudden burst of guitar grinding and drumhead abuse opened the set as the torrid sound on stage began with a playful glee. Kawabata Makato sat mid-stage, playing intensely and directing the musical collective on stage. With that mature hair and beard, he looked more like a shaman that guides the free-jazz ebb and flow. With some of the unearthly sounds, one wondered if he’s summoning a mothership from a far-away galaxy to visit. After a few songs of energy and catharsis, then after three joyous romps through noiseland, the band opened up a can of jam-rock proficiency and taps into a psychedelic feel that echoes Pink Floyd’s Ummagumma. The set completed with two more ‘typical’ AMT songs. Screeching guitars, howling effects, drumheads given an Ike Turner beating, and monk chants seem to be typical fare for this group that is a joy to hear. 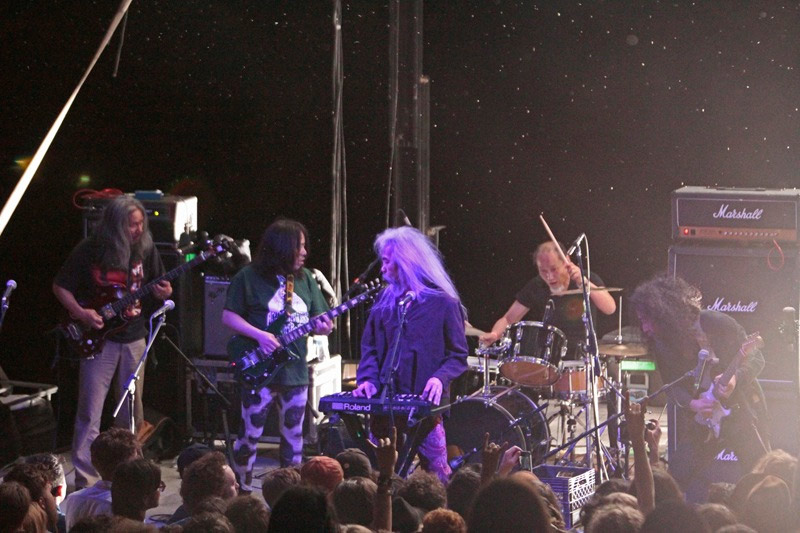 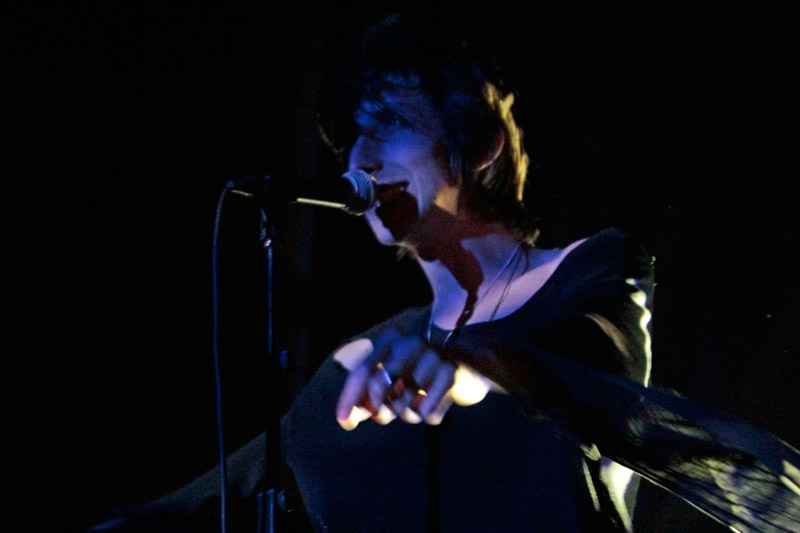 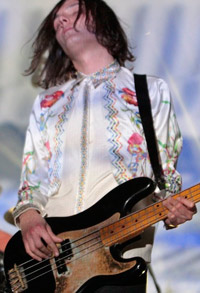 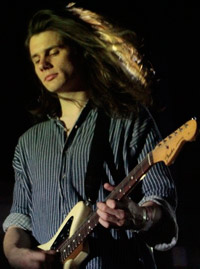 There were nice visual graphic background patterns that twisted and spun with the music on the main stage from The Horrors. Faris Badwan’s stage presence has evolved and with stage maturity, he delivered more guttural, intimidating baritone vocals with echoes of Stiv Bators. Bassist Rhys Webb began the show in a dervish spin, while guitarist Joshua Hayward played the part of a lion pacing the stage (even his hair appeared to be a furry mane). Tom Cowan meticulously banged on keyboards and Webb the bass, which gave the main driving force behind their sound. They have become consummate stage professionals, and while the music has become more taunting and less haunting, the band’s costumes and hair have become part of their vivid live music experience. 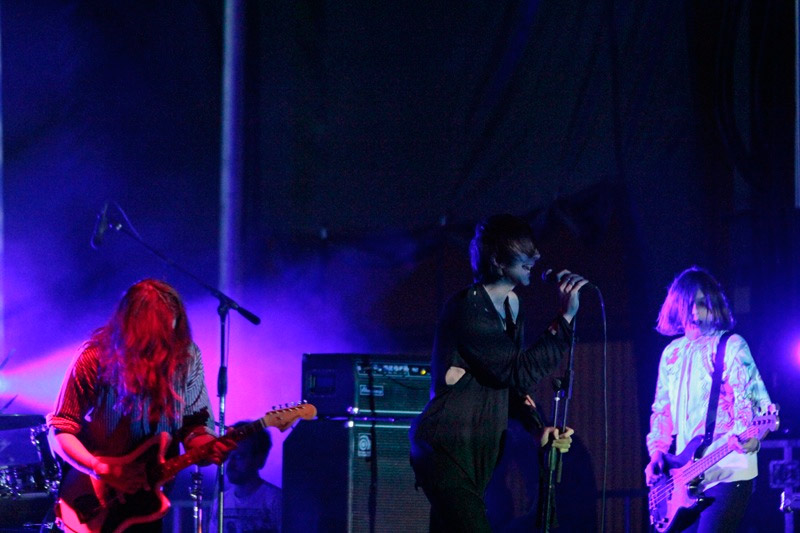 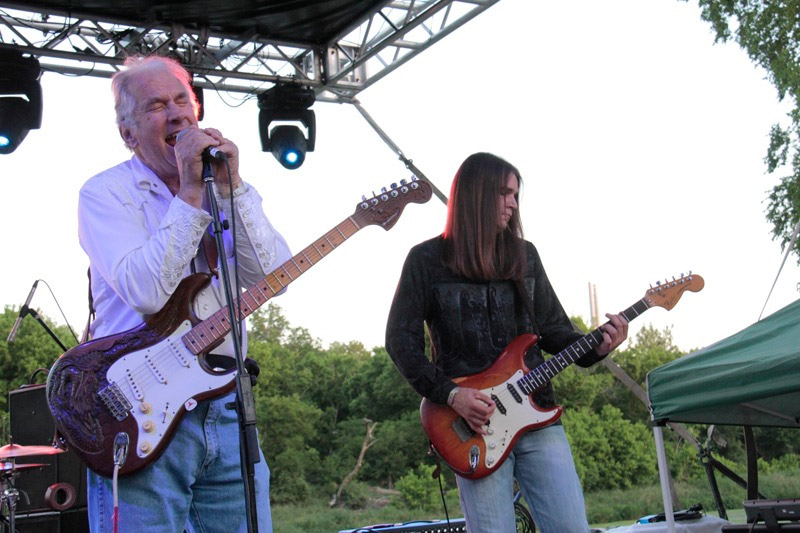 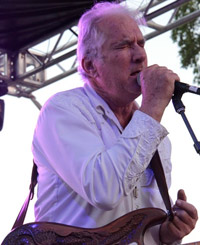 George Kinney reunited this influential early psychedelic band from the late 1960s. Some wines improve with age and in some cases, that’s also true with musicians. The guitars had deliberate resonation and Kinney’s vocals conveyed an urgency that eclipsed 46 years. Most bands of this maturity will head into the sunset toting old songs and smiles. This time was an exception. T heir music style is in a renaissance. They have the skills and clearly have the burning passion so I look forward to seeing what new music The Golden Dawn will offer. 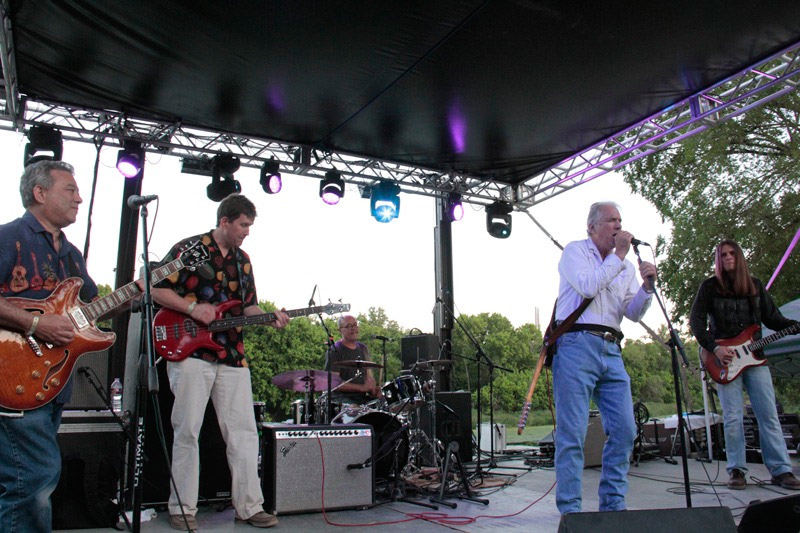 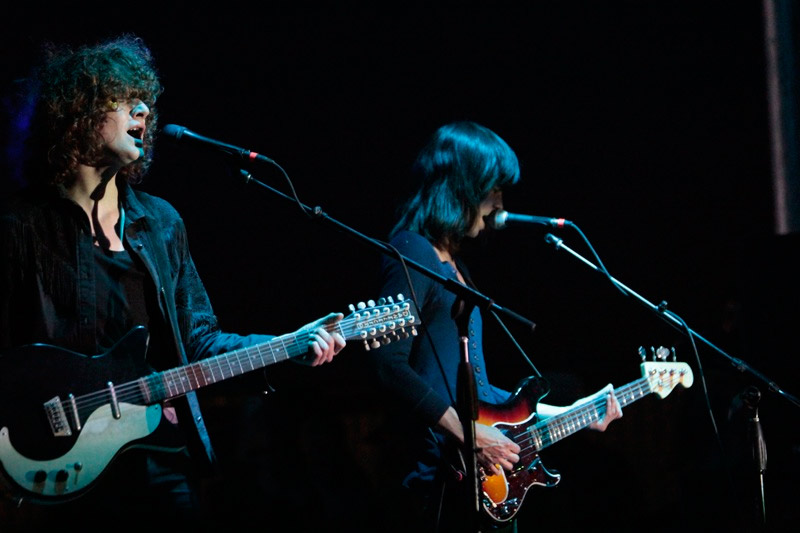 Nice walking basslines (1/8 then 1/4 notes), lots of pedal vibrato and the tenor vocals were clean from Temples. The band did a nice live performance recreating the intricate sounds off the recordings without a snag. That being the case, the band was focused on the performance and was less interactive with the crowd during their time on stage. 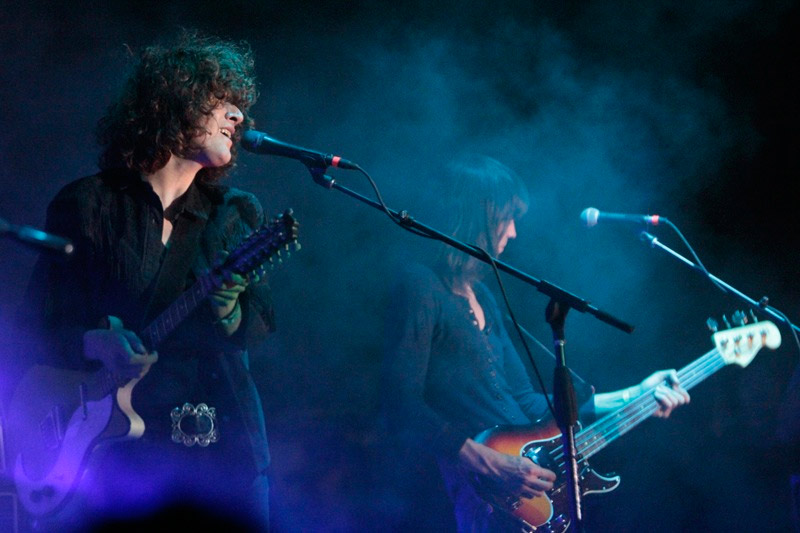 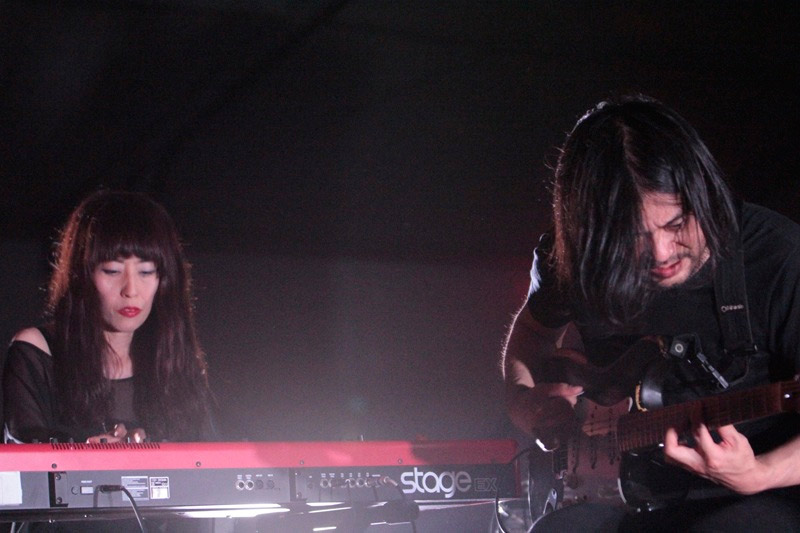 Still regaining my wits after The Octopus Project (see above), the stage began dark and silent, suggesting that something surprising was about to happen. The initial sound was a building tone, and then the music began before I even saw the musicians. The intensity broke before the lights made it on and the music poured off the stage and flowed over the audience like a wave. Powerful and dramatic songs flowed from the pastoral to the slaughterhouse and sounds moved from graceful to grit-filled. My ears were challenged, my heart was racing, and I certainly liked what I heard, although describing such a musical mural of sound is not easy. The easiest way to describe the music of MONO is to say it’s in the vein of Sigur Rós with its classical overtones and dynamics. 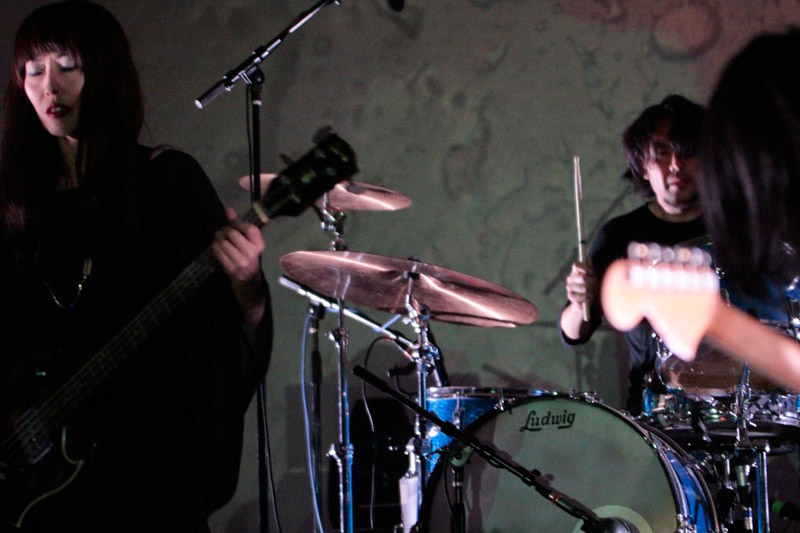 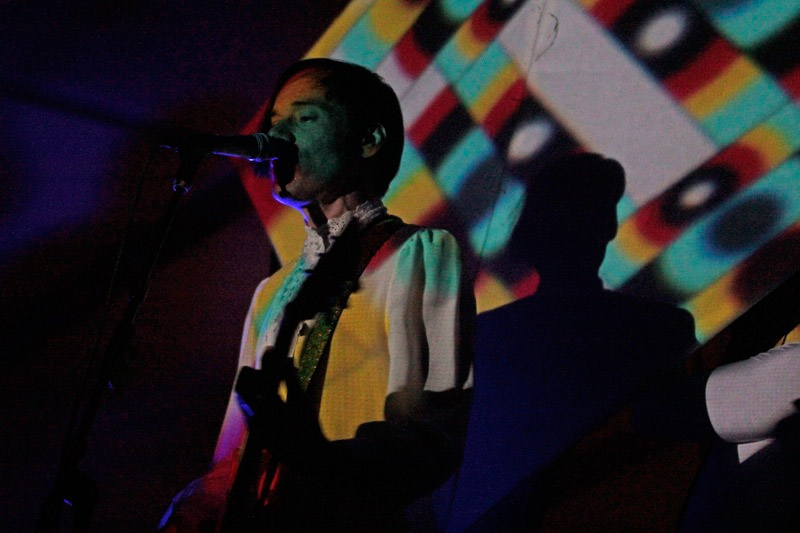 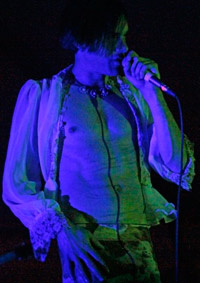 The musical aggregation from Athens, Georgia, of Montreal, opened with “Triumph of Disintegration” with dancers and an array of props, projectors and costumes. This night’s theme could have been called, “Fun with Shapes”.  Large triangles showed eyes during “ID Engager”, then a large geometrically shaped princess appeared on stage and the backing visuals cycled a gambit of circles, ovals, squares, rectangles and hexagons. By the time “Prometheus” was played there were at least three cast members crowdsurfing through the audience. The visual backings painted the vivid murals that were loosely related to each song, and the visual animations romped through various shape and legacy band art for the last track.  Their music was perky, upbeat and the lyrics feel like an Alice in Wonderland romp through a new age bookstore. The songs were played a bit faster than the recorded versions, but that may be the result of set times and not set lists, as they were closing out the tent stage Saturday evening. The keyboards were especially bouncy, while the guitar parts were crisper than ever. Several audience members indicated they came for the band’s visual festivities, but afterwards they said it was the musical intrigue of Kevin Barnes’ group that they’ll remember. When seeing them live, every single time they’ve shifted gears and offer both musical and visual surprises, so it’s that element of the unexpected that makes each show a great sonic party with some freaky eye-candy. 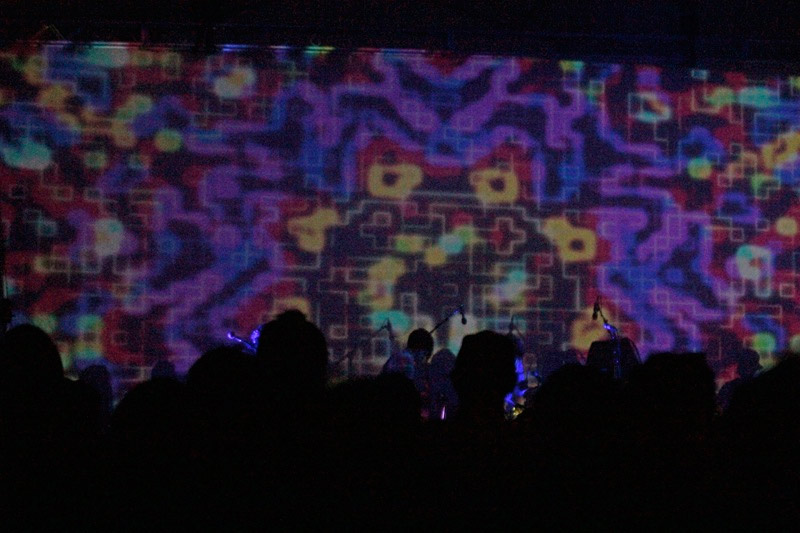