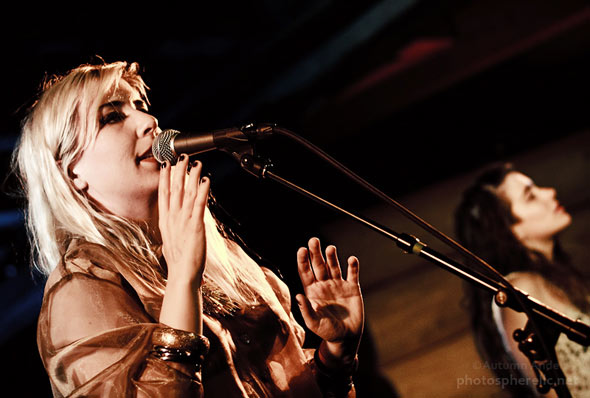 Click here for photos of Austra at SXSW 2011 in Austin, TX in the QRO Concert Photo Gallery

Opening the doors to the Doug Fir Lounge, Friday July 22, tendrils of smoke coyly tiptoed out into the dry air.  The stairs downward disappeared into the thickening fog, and the venue was transformed into a nebulous cavern.  The opening band, Dangerous Boys Club, shrouded by the smoke and rays of neon light piercing through the heavy cloud, offered their last bit of distorted sound and promptly left the stage unseen.

Moments after their departure, the familiar Doug Fir stage emerged.  The cartoonish wood grain wall and flat lighting stood in stark contrast to the room first entered.  A sobering half hour drudged by waiting for Austra and minutes trickled by after that: a byproduct of admittedly missing their soundcheck.

Finally, Toronto-based Austra took to the stage in full: three vocalists in front and three musicians draped in the shadows of the deep end of the stage.  Katie Stelmanis started strong with her impressive voice.  Though her attention kept returning to the soundboard for the first piece, soon after her vocals cast a strong line whipping through the chatter and hooking the crowd’s attention.  A slightly packed room attracted more onlookers until it was a shoulder-to-shoulder mesh ogling the powerful voice.  She began with their album’s opening track, “Darken Horse”, a perfect invitation to a dark and mythical world.

Stelmanis pulsed with a fervid energy pervading every part of her body.  She sang with intensity, dominance, and inspiration.  Her trills and wails took on a physical presence.  She flapped her arms and flung her hair around, possessed by the energy of her own voice.

Despite her passion, it was not enough to maintain a deadlocked interest on everyone.  The crowd thinned out a bit half way through the set.  While the first few rows seemed visibly engaged, most others watched attentively but responded with little enthusiasm.  Even the highlights “Lose It” and “Beat and the Pulse” did not spark enough inspiration to see the ebbing crowd dance.

Austra playing “Beat and the Pulse” live at Doug Fir Lounge in Portland, OR on July 22nd, 2011: 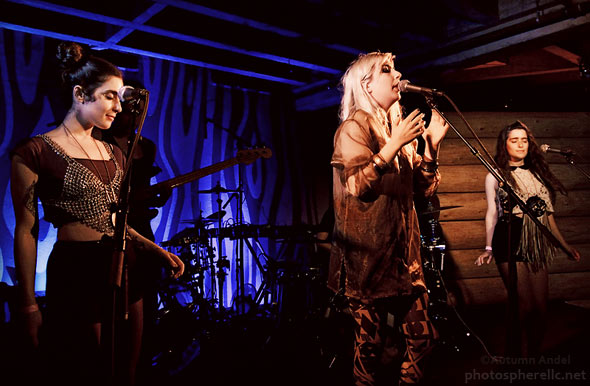 Supporting vocalists, twins Sari and Romi Lightman from fellow Canadian band, Tasseomancy, added little fire to the performance.  Romy, on the left, stood rigid and stoic, moving back and forth like a metronome staring fixedly overhead.  Her repetitive movements were compounded with a lack of interaction with anyone around her.  Sari, on the other hand, felt comfortable taking the mic off the stand and engaging with the crowd a bit.  Their voices were sometimes lost in the mix and sometimes played out as an innocuous addition.  Other times, though, as in “The Future”, they helped create an expansive swell of vocal depth, which rang beautifully. 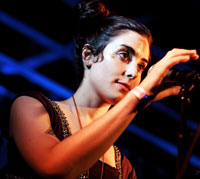 The musicians in the back were easily forgotten.  Though they didn’t add to the stage presence, they played well and perhaps that they were mostly unnoticed in a way remarks of their solid musicianship.  Drummer Maya Postepski, for instance, can be credited with an unshakeable set.

Austra closed with “Spellwork”, a song about burning desire, something which they delivered at times but which seemed to have dampened by this closing piece.  Sadly the potential of this band preceded this particular performance.  They filed away at the end with polite gratitude.  And the traditional stage was reinvented again with dimmed lights and video projections for the headliner, Cold Cave (QRO live review).

Austra playing “The Villain” live at Doug Fir Lounge in Portland, OR on July 22nd, 2011:

Black Books – “An Introduction To…”