Val Air Ballroom in Des Moines, Iowa played host to a stop on the AWOLNATION tour.... 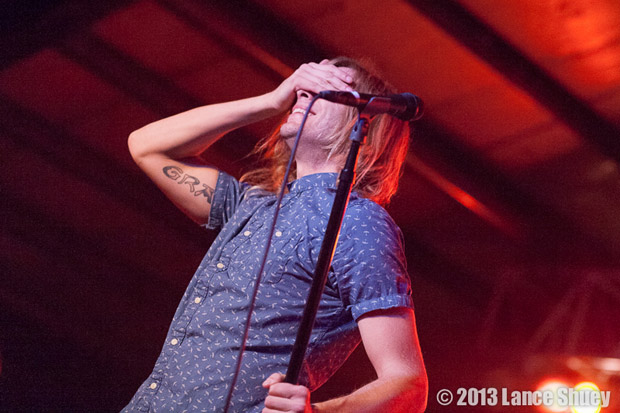 Val Air Ballroom in Des Moines, Iowa played host to a stop on the AWOLNATION tour on Tuesday, April 2nd.  The band was joined on the road by Mother Mother and Blondfire.  Val Air is a unique spot in Des Moines.  Built in 1939, the venue has a deep history and continues to draw tours from an array of genres.  Regardless of the bill, faithful fans continue to flock into the night to fill the space for concerts. 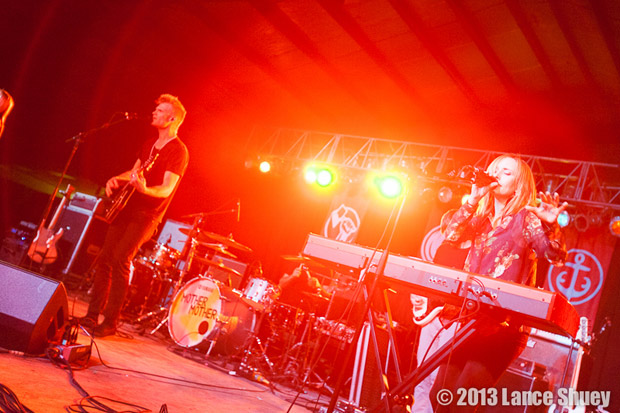 Mother Mother opened the show with playful energy.  The Canadian group has been playing together since 2005, and has released four albums under their collective belt.  Lead singer/guitarist Ryan 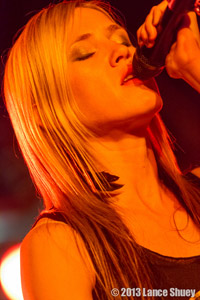 Guldemond was flanked by two females (Molly Guldemond & Jasmin Parkin) who doubled on vocals and keyboards both.  The group had a charismatic presence while playing through their catalog of pop-tinged/punk-tinged rock tunes.  They brought everything one could ask for in a touring opener – they were gracious to be there, their songs were as catchy as they come, and above all, they were really good (not to mention incredibly well received).  Also, when the band finished, they took care of all their own equipment and spent time at the merch table conversing with their new fans.  The band showed a lot of promise in their sound and appeared to be making strides at carving their way in the industry. 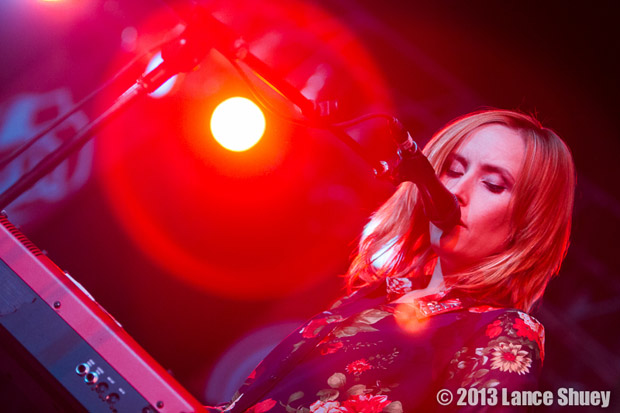 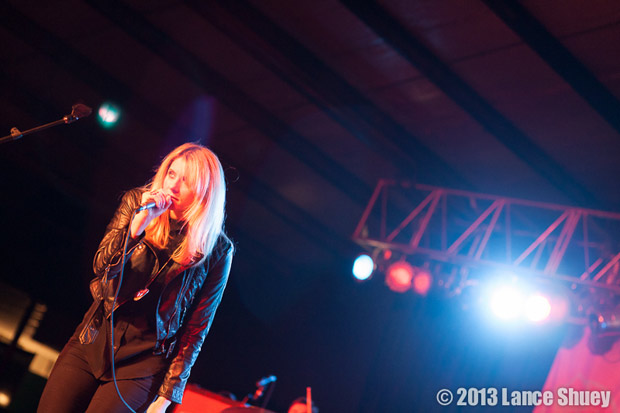 Los Angeles-based Blondfire took to the stage shortly after Mother Mother, and had a very different, yet equally engaging sound & presence.  The group, on album, 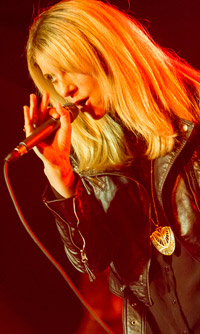 consists of brother-sister combo Bruce and Erica Driscoll.  Live, they are backed by a full band and present themselves with an effortless confidence.  The indie-pop outfit immediately brought to mind sounds similar to Rilo Kiley or Camera Obscura.  They were not over-playing by any stretch of the imagination, settling into a nice churning groove throughout their time on stage.  They were somewhat wandering, yet well thought-out in their approach.  Erica explained midway through the set that the band had been messing around with a Fleetwood Mac song, at which time they played a spot-on cover of “Dreams” from Fleetwood Mac’s Rumors.  The band closed their set with their biggest single to-date, “Where the Kids Are”.

After the two supporting acts played, conversations could be heard throughout the venue about how good the show had been up to that point.  It was clear from the energy and chatter that both bands had plenty of new fans on board, which is always a wonderful vibe at any show.  This was especially encouraging considering the difference in style between the two groups. 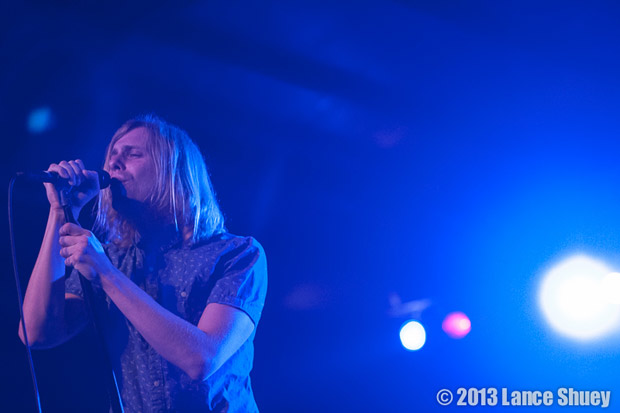 Click here for photos of AWOLNATION at Shoreline Amphitheater in Mountain View, CA on September 13th, 2016 in the QRO Concert Photo Gallery

Click here for photos of AWOLNATION at Irving Plaza in New York, NY on May 3rd, 2016 in the QRO Concert Photo Gallery

Click here for photos of AWOLNATION at Madison Square Garden in New York, NY on March 4th, 2016 in the QRO Concert Photo Gallery

Click here for photos of AWOLNATION at Irving Plaza on June 27th, 2015 in the QRO Concert Photo Gallery

Click here for QRO’s review of AWOLNATION at House of Blues in Boston, MA on December 12th, 2012

True to form for any main act, 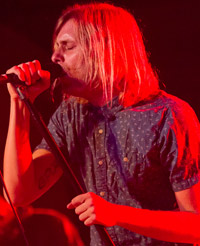 AWOLNATION waited a fair amount of time to take the stage in an attempt to help build anticipation, which seemed to work quite well.  When the lights finally cut, Louis Armstrong’s “What a Wonderful World” began blasting through the PA system and the crowd blew up.  It was an interesting approach for a band like AWOLNATION, but it felt good.

When the lights flashed, AWOLNATION was poised to play with four red banners behind them.  Frontman Aaron Bruno (who formed the band and has most of the songwriting credit) stood center-stage and stared intensely into the screaming crowd as the band broke into the first song.  It became apparent at that point that most people in the crowd were there to see them.  The group played considerably louder than either of the supporting acts, with heavy synth tones flowing from the keyboard and blazing riffs screaming from effect-ladened guitar.  Bruno flailed around in true frontman fashion, which certainly kept the crowd entertained. 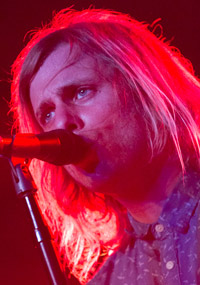 At times, AWOLNATION had almost a touch of soul, albeit it most of the time they stuck to straight-up heavy electronic rock ‘n’ roll.  No mistakes about it, there was a big turnout and the crowd appeared to really enjoy what was happening throughout the set (hands in the air, cheering wildly, singing along, etc.).  It was what the live experience is all about – letting go in the midst of fellow fans and taking in the songs at volume levels so loud the chest cavity seems to vibrate. 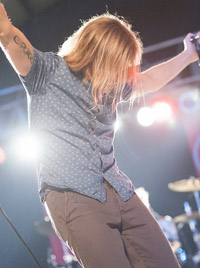 The night of music brought forth a range of experiences – each of the bands had a different sound and feel.  It is unclear if the incredible reception to all three was a testament to the kindness & openness of Iowans, or rather a result of the talent of the groups themselves.  It is likely a touch of both, with the latter playing by far the more important role in the mix. 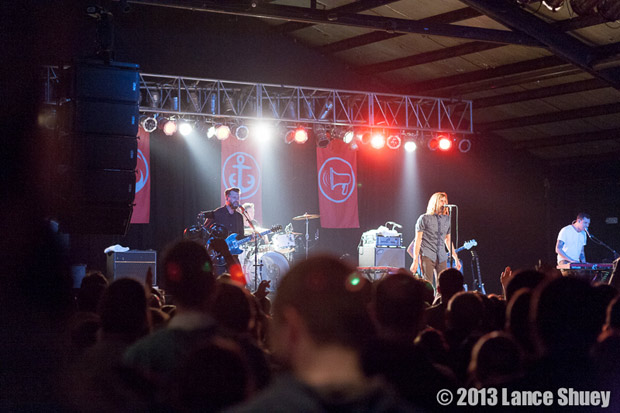