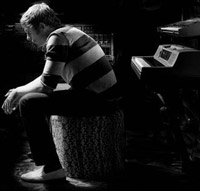 Friday August 6th, 2010, 10:30 PM at Chicago’s House of Blues the new yet impressively far from shy band AWOLNATION came out on stage and showed the crowd what they are all about.  Quickly intriguing the audience with songs off of their new EP Back from Earth, lead singer Aaron Bruno and the four other band members gave nothing less than a surprisingly refreshing show.  Representing their band with a huge bright red banner on stage reading “AWOLNATION”, the crowd was sure not going to forget their name nor their sound.  Their songs started off sounding punk rock and traveled towards a heavy metal sound with a dash of soul in Bruno’s angry high notes.  Not only were their songs energetic but each band member was doing their own thing dance-wise, from head banging to clapping to even a couple of fist pumps!

With their own individual dance moves, it was quite apparent they aren’t quite used to having organized live performances – which is not always a bad thing.  In this case their spontaneous personalities helped give their performance have a crazy yet fresh vibe to it, bringing to the audience an out of the ordinary concert experience.  While AWOLNATION rocked out on stage, the crowd was head-banging along with them while girls shook their bodies to the music with their eyes closed and looking pretty into the heavy tunes.  Bruno pleasantly engaged the crowd as he included them into songs which made it fun and felt as if it truly mattered to them whether the audience had a good time watching them perform or not.  Through out their entire thirty minute set there wasn’t one dull moment during their show, with the crowd waiting for what to expect next out of their multi-genre style.  AWOLNATION is an eclectic band, but not for everyone’s taste – when asked what they thought about AWOLNATION’s performance an audience member said, “They need to figure out what they are,” referring to their genre.  But another said, “They were fun and have great potential,” so it all depends on what you like in a band.  If you’re into bands with an arrange of sounds that have non-stop head banging, crazy shows then you’ll love AWOLNATION.