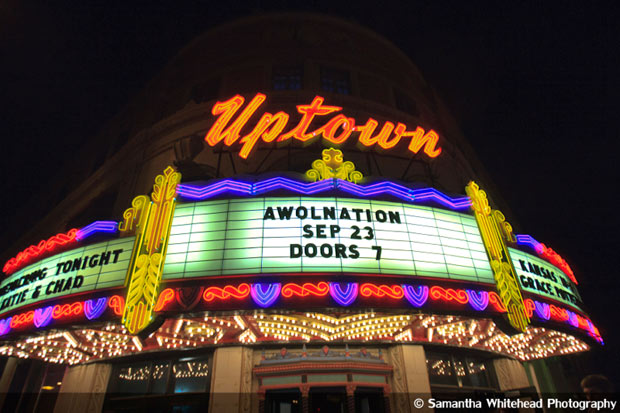 The marquis read “AWOLNATION, September 23, Doors at 7” but by 5:00pm the line of concertgoers was already wrapped around the side of the Uptown Theatre and around the block.  The venue staff promptly let the horde through the front doors at 7:00 and the sloping dance floor, seats, and balcony filled to near capacity.  The Uptown Theatre in Kansas City, MO features a small stage, dwarfed even further by the surrounding operatic decorations.  Statues of Greek-style figures looked down on the crowd and a looming decorative arch topped the stage.  Breaks in the pre-show house music were filled with the chattering of the crowd, standing shoulder to shoulder in the small indoor amphitheater. 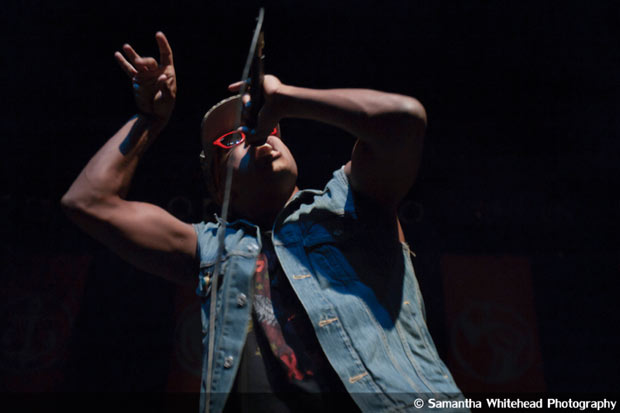 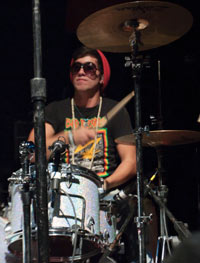 Opening artist Zeale got the night started with a very energetic hip-hop sound featuring music by DJ Rockwell.  A notable remix of “Sleepy Head” by Passion Pit (QRO live review) opened the relatively short set.  “Frenemy” from the Wake Hell Or Make Peace EP featured lyrical jabs at “so-called friends” and a catchy synthesizer lead.  The drumming of Gibran Nassif set Zeale’s sound apart from that of other rap artists.  The difference that an actual drummer made, as opposed to an electronic drumbeat, was tremendous in the live environment.  Another lyrically heavy track, “Black Mr. Rogers”, had a whistling melody and poppy background vocals.  For the last song of the set Zeale performed a freestyle piece based around three words that the audience proposed: zebra, hot dog, and kitten.  The seemingly impossible was done as Zeale managed to create a catchy impromptu song that left the audience cheering. 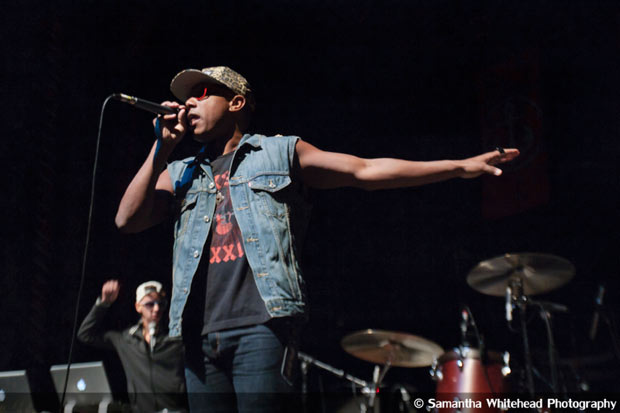 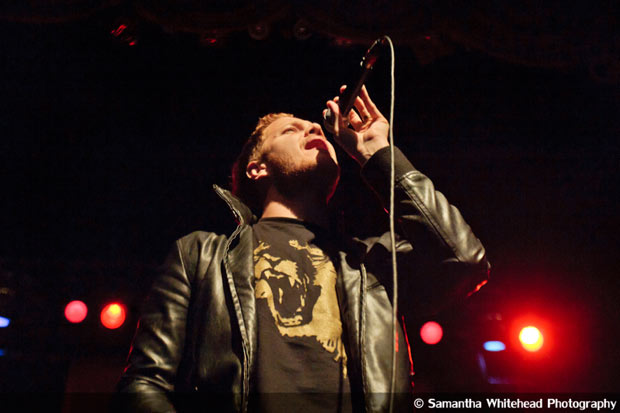 Photos of Imagine Dragons at Leeds Arena in Leeds, U.K. on November 10th, 2015

Photos of Imagine Dragons at Barclays Center in Brooklyn, NY on June 30th, 2015

Photos of Imagine Dragons at The Wiltern in Los Angeles, CA on March 20th, 2013

Photos of Imagine Dragons at Emo’s East in Austin, TX on October 18th, 2012

Judging solely by the crowd’s response, Imagine Dragons could have easily been mistaken for the headlining band, if not for the AWOLNATION banners hung along the back of the stage.  As the band members filed onto a dark stage, the crowd in the Uptown Theatre surged to a deafening roar.  The opening song was “Rocks”, the hidden track on the recently released Night Visions album.  Vocalist Dan Reynolds bounded across the stage, switching from beating a large bass drum, to filling in the four piece’s sound with a snare drum positioned on the very edge of the stage.  The song that everyone seemed to be anticipating was “It’s Time”, with its extensive media coverage, but “Radioactive”, the opening song on Night Visions was definitely a highlight of the set.  Reynolds displayed a level of emotion that is rarely seen in live music today, and the thunderous bass and wobbly electronic fills along with an entire audience singing along to every syllable made for a breathtaking three minutes.  Other highlights included “Demons” and “On Top of the World”. 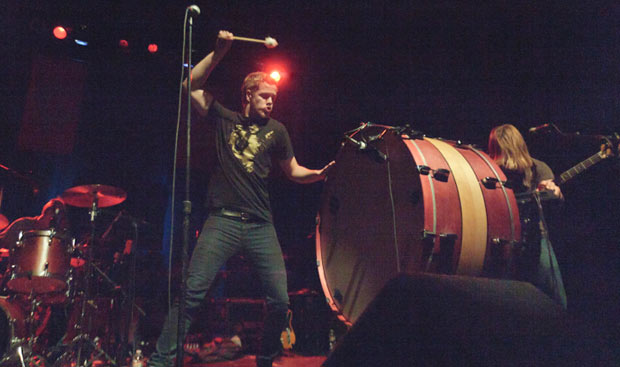 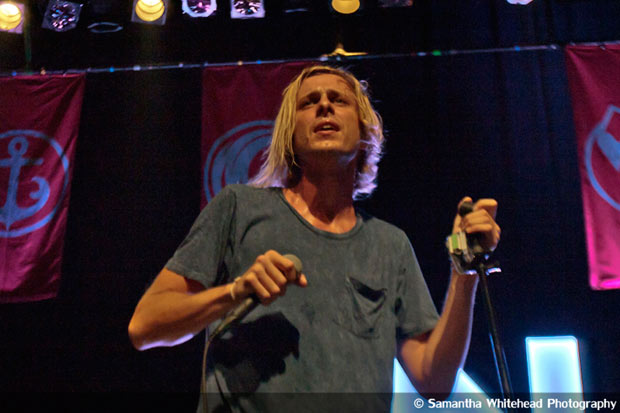 AWOLNATION took to the stage after Imagine Dragons performed their closer, “Nothing Left To Say”, and the crowd didn’t miss a beat.  AWOLNATION’s lengthy set rounded out the night with hits such as “Not Your Fault”, “Jump On My Shoulders”, and “All I Need”, all featured on the 2011 album Megalithic Symphony.  Lead singer Aaron Bruno covered every square inch of the stage frantically running from one edge to another, even jumping into the crowd on two separate occasions.  Another star of the night was bass guitarist David Amezcua, whose pedal board was more diverse and extensive than that of most electric guitar players.  Amezcua’s sustained bass lines along with the bass from the drum kit and synthesizer alike literally rattled the Uptown Theatre.  The bass could be felt in the chests and eardrums of every patron, from the front row to the back wall.  The hit “Sail” was strategically placed second to last in the set list.  Fittingly, every person in the room knew the words to the repetitive, catchy tune.  Unlike the album or radio version, a well-executed guitar solo ripped through the middle of the song.  AWOLNATION’s encore was the lengthy “Knights of Shame” which topped even the twelve-minute version featured on Megalithic Symphony. 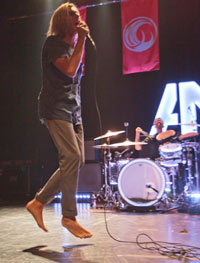 Even though each band was shockingly different from one another, the crowd transitioned smoothly between all of the artists.  The common denominator seemed to be heavy bass and an energetic crowd, both of which were more than abundant during all three sets.  Imagine Dragons and AWOLNATION together managed to pull an impressive crowd for a Sunday night show in a small venue.  Zeale is an act to keep on the musical radar, although his sound was a bit more distanced from the last two bands.  Overall, a night of crowdsurfing to the sounds of great bands seemed to be well worth the late night out to those fortunate enough to see this show. 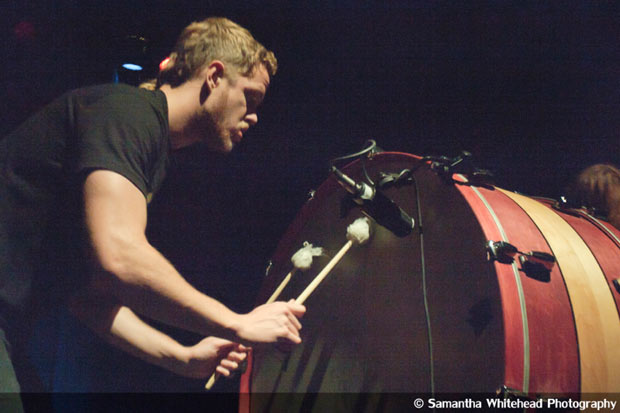