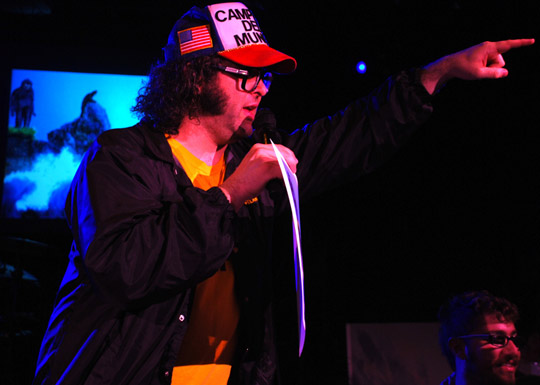 Art bad & good combined forces to raise money for charity thanks to Judah Friedlander, Xiu Xiu, and NY Magazine.  All this year (and last), NY Magazine has held a series of events, with TV personalities and indie music bands, including ‘Highbrow BBQ’ (with Islands – QRO photos – and fan-favorite CJ from Top Chef) and ‘Indie Rock Trivia Night’ (with host Zack Galifianakis – Comedians of Comedy – and Les Savy Fav – QRO photos) earlier this year, plus the upcoming (QRO Concert Calendar listing) ‘Indie Rock Karaoke’ (with Andrew W.K. and Ted Leo & The Pharmacists – QRO photos).  But at New York’s (le) Poisson Rouge on Wednesday, November 19th, it was host Judah Friedlander and band Xiu Xiu that got together to raise money and spirits.

However, the first things to be raised were glasses, thanks to the free Cape North Vodka on offer for the first hour of the event.  Of course, that did bring everyone there early – creating a massive line around the block outside in the all-too-suddenly cold November night.  And the venue didn’t help itself by advertising ‘Viking Mojitos’ – which take far longer to make than any ‘vodka & X’ drink.  Of course, the relatively full-of-themselves (le) Poisson Rouge (QRO venue review) cut the free booze off almost directly after an hour, no matter how long one had been waiting in line, outside at the door and/or inside at the bar.  But people still managed to get a drink or two in, to carry them to Judah Friedlander’s ‘Bad Art Auction’.

The recognizable comic (30 Rock, Best Week Ever) said he had been collecting ‘bad art’ for twenty years now, and was emptying his closets for New York Cares, a local charity.  And so he held an auction for his gaudy wares, egging on bidders even as he degraded his items up for bidding:

While the preference for Bigfoot material and males with their shirts (and more) unbuttoned was the most obvious, it was unusual to note how much of the bad art came from Florida.  With many of the nation’s retirees, Florida is sort of a magnet for yard sale/flea market-level goods, and bad art is clearly no exception.  Also notable is that the winning bids most definitely went up as time went on, no matter the ‘quality’ of the item up for auction – clear steals were early items like the ‘tigers on Mars’ painting and whatever that was that played Christmas songs, while the late-entry unicorns and shitty eighties art oversold.

Click here for photos of Xiu Xiu at Fordham University in The Bronx, NY on March 25th, 2008 in the QRO Concert Photo Gallery

After Friedlander’s hilarious and extended auction, it was kind of no surprise that Xiu Xiu’s performance was a bit of an add-on.  The unusual band is very much on the artistic end of things on Women As Lovers (QRO review), with a wide and unusual array of instruments (especially percussion, as well as flute & melodica).  Clearly not for everyone, there was a smaller crowd.  But, between Friedlander’s auction, his sale of the rest of his bad art to anyone who’d buy it later, and the raffle for a Gibson guitar (not to mention the fact that New York Cares took credit cards & checks – and this was all held after an open bar…), money was raised for charity, good times were had, and art was brought to the masses.