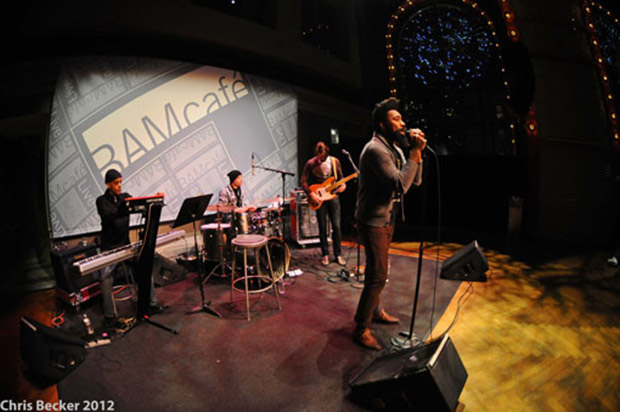 BAMcafë is located on 30 Lafayette Avenue, Brooklyn, between Ashland Place and St. Felix Street.  Part of the Brooklyn Academy of Music, it is inside the same building as BAM’s Howard Gilman Opera House and Rose Cinemas, and began holding events itself in 1999.  Along with the nearby Harvey Theater, the entire Brooklyn Academy of Music lies in the Fort Greene area of Brooklyn, just off Flatbush & Atlantic Avenues, just up the street from the Clock Tower and not far from Brooklyn Masonic Temple.

The actual BAMcafé is located on the second floor of the large BAM building, through a lobby and up an escalator.  More of a large hallway or foyer than a space in its own right, it was converted by BAM to hold smaller, free events.  The stage is at the far end from the escalator, next to the coat rack and between the two bathrooms (better than where it used to be, just a spot on the floor in the middle, with no cordoning off – some musicians literally had to walk through the crowd with their instruments to get to the stage).  The place looks like a space in a modern art or architecture museum, with glass & steel window-walls and red ‘construction crane’-like pillars.  There are tables and chairs located in the center of the space, and food is served, while the bar is between the escalator entrance and the middle of the place.  The backstage ‘green room’ is actually located up another level, and has full-length windows that over look the escalator entrance – one can see the band peering down from above.

Usually just part of the BAM building, BAMcafé is rolled out to host free events, often as part of a series, such as the ‘Red Hot + Rio’ celebration of Latin American music in December, or the ‘Sounds Like Brooklyn’ (previously ‘Brooklyn Next’) showcase of young, independent Brooklyn acts in February.  Being a museum putting on the role of venue, BAMcafé has some nice advantages, such as an attractive, clean space and good sound system, as well as being free, but that is more than outweighed by the problems brought by the change of use.  The security is ‘museum security’, not ‘venue security’ – much older, less understanding, and less used to handling large amounts of young people.  They also enforce BAM’s strict rules, including an absolute ban on photography, and low capacity: even with a moderate-to-low level of audience density inside BAMcafé, security will keep lots of people waiting to enter, in a line that stretches from the base of the escalator outside.  The artists depend on whether & what series is being held, but the series obviously are more high art and older styles of music than popular, current material (the ‘Brooklyn’ series being the exception).  But not a whole lot could be expected from a free space inside a museum, even at BAM. 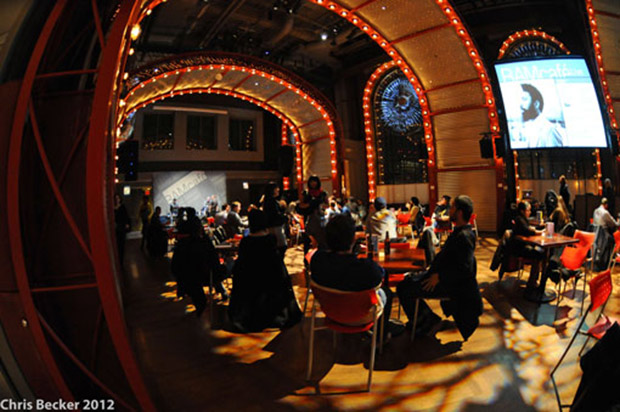 The Physics of Meaning : Snake Charmer and Destiny at the Stroke of Midnight