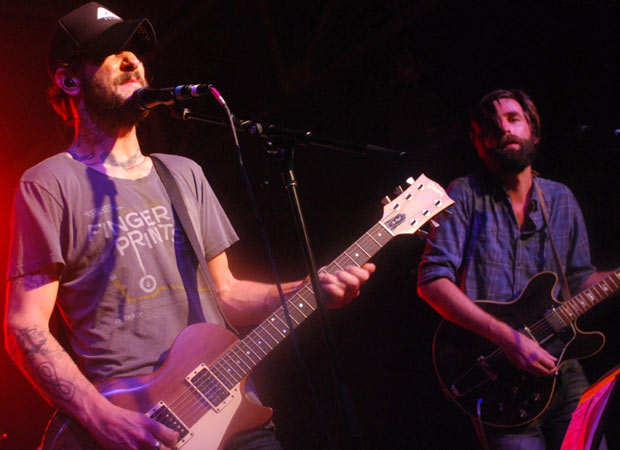 Click here for photos of Band of Horses at 2015 Landmark Music Festival in Washington, D.C.

Click here for photos of Band of Horses at 2014 Newport Folk Festival in Newport, RI

Click here for photos of Band of Horses at McKittrick Hotel in New York, NY on January 30th, 2014

Click here for photos of Band of Horses at The Bluebird in Bloomington, IN on November 29th, 2012

Click here for photos of Band of Horses at Starlight Theatre in Kansas City, MO on August 6th, 2012

Click here for photos of Band of Horses at Music Fest NW 2011 in Portland, OR

Click here for photos of Band of Horses at CMJ 2007 in New York, NY 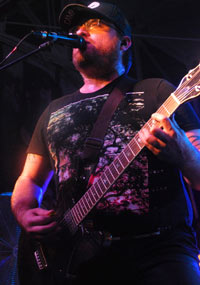 Once a band is four or five albums into their career, once they’ve got songs that are ‘fan favorites’ and just generally have at least some success, each new album becomes a riskier artistic proposition.  There’s more an accomplished back discography to be compared to, and less room in fans’ hearts (or the band’s own set lists) for new material.  The glow of the ‘late greats’ becomes a bigger & bigger shadow to live under, and the swings-and-misses more & more of a warning sign. 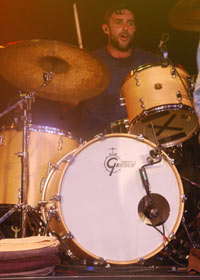 And this is all only doubly true for an ‘album release party’, like Band of Horses had for their new Mirage Rock (QRO review) at Brooklyn’s House of Vans on Tuesday, September 18th.  This kind of show is in celebration of a new album that people haven’t heard yet (save for web leaks), creating even more of a dichotomy between the know-by-heart classics and the new material.  And then you factor in that it’s been multiple albums since Horses’ breakthrough Everything All the Time and single “The Funeral”, plus that their last record was the less well-received Infinite Arms (QRO review), and it could have spelled trouble.  Yet the Band rose adroitly to the occasion. 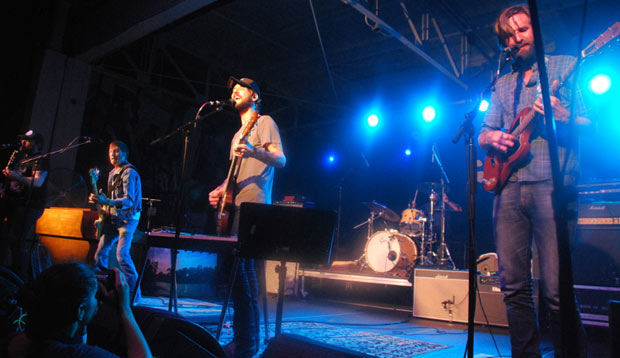 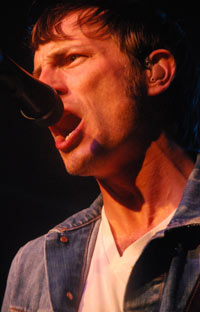 There was another big factor to take into account, certainly the most obvious one: the weather, and its effect on the unusual venue.  House of Vans (QRO venue review) is actually a warehouse and outdoor space in which Vans Sneakers sponsors free shows during the summer.  Not being an actual venue with an actual liquor license, the space can’t sell tickets and/or sell drinks; instead, it requires just an RSVP, with the only drinks being free.  Thus, the regular events there this summer (Band of Horses’ show was not a ‘formal’ House of Vans show) attracted lots of locals who only came for the free drinks, which were only given out in the far half of the outdoor area, and could not be brought inside, where the actual stage is, a recipe for a crowd with lots of people who didn’t about the actual show.  Though Band of Horses got around it somewhat by giving away tickets to the event for those who pre-ordered Mirage, the RSVP list was eventually opened to the regular public. 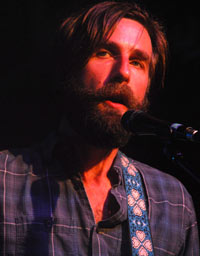 But that was nothing compared to the weather.  A tornado watch was in effect in NYC, forcing the cancellation of at least one fully-outdoor show (The Avett Brothers at Central Park SummerStage was moved to the following Monday – QRO NYC Show Preview), and even just the threat limited the amount of people who came out to House of Vans.  And then, before even opener (and Horses guitarist) Tyler Ramsey performed (QRO photos), the rain started to come down, sporadically but hard.  At least this time House of Vans had a tent over the open bar, which people huddled under in cramped conditions, as the large loading dock door between the warehouse and outdoor space closed, making it basically impossible for anyone outside to even know someone was playing (Ramsey playing solo didn’t help…).  The loading dock door did open, at least halfway, when Horses began, but the crowd was irrevocably divided between those in the warehouse for free Band of Horses and those under the tent for free Heineken. 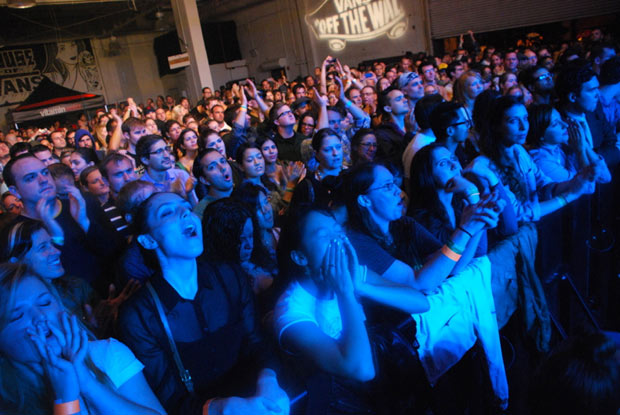 However, that might have actually improved the show.  Instead of a sprawling mass of bros outside creating a din that could have overwhelmed Band of Horses’ many great quiet songs, many of those bros didn’t come, and the rest stayed on the other side of the loading dock door.  Only the most expert of free-drinkers could have managed to handle both seeing the show and drinking under the crowded tent, with the drenching in between.

Band of Horses playing “The Great Salt Lake” live at House of Vans in Brooklyn, NY on September 18th, 2012: 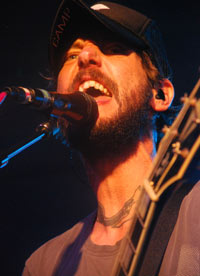 What’s more, Band of Horses didn’t just play the new album that they wanted to play and begrudgingly a few hits that the crowd actually wanted to hear, but instead quite expertly mixed up their set list (QRO photo).  Yes, there were Mirage tracks, but it surprisingly wasn’t the most-played album, and neither was the underwhelming prior Infinite Arms, but rather 2007’s Cease To Begin (QRO review), the album after their hit Everything All the Time.  And the audience request they filled?  No, it wasn’t “Funeral” or something else equally as old, but rather “On My Way Back Home” from Infinite.  Indeed, many of the Infinite songs, which sounded over-polished on record, came off more honest live, in the less-than-polished surroundings.  Yes, they did play “Funeral” (as the song before their encore break) and other singles like Everything‘s “The Great Salt Lake” and Begin‘s “Is There a Ghost”, but that didn’t stop less-heralded pieces like Mirage‘s “Dumpster World” & “Electric Magic”, or Infinite‘s “Older” & “Infinite Arms” (the night’s closer) from shining.

Band of Horses playing “Is There a Ghost” live at House of Vans in Brooklyn, NY on September 18th, 2012:

“This shouldn’t be this much fun…” Horses singer/guitarist Benjamin Bridwell remarked at one point, and maybe he was having too much fun – because it was also his wife’s birthday, as he remarked before “Marry Song”, and here he was partying with the boys.  But album release parties for bands as established as Band of Horses can be fun, even in the rain with free-drinkers.