It’s been ten months since a bus crash that left Baroness and others traveling with them badly injured.... Click here for photos of Baroness at 2016 Sound On Sound Fest in Austin, TX in the QRO Concert Photo Gallery

Click here for photos of Baroness at House of Vans in Brooklyn, NY on July 31st, 2013 in the QRO Concert Photo Gallery

It’s been ten months since a bus crash that left Baroness and others traveling with them badly injured.  Drummer Allen Blickle and bassist Matt Maggioni both suffered fractured vertebrae and subsequently left the band.  Singer/guitarist John Baizley broke his leg and, for lack of a better word, obliterated his arm.  He reported that it needed two titanium plates, 20 screws, a foot and a half of wire, and almost 50 staples to put back together.  After all this, it was only a few weeks ago that they finally got back on the road, ending up this night at The Deluxe at Old National Centre in Indianapolis on Tuesday, June 11th. You could tell that they were happy to be back to work.  Baizley could be seen in the crowd enjoying opener Coliseum.  He even popped up behind an amp to get a closer look, seemingly discontent with sitting backstage after ten months off the road.  Coliseum’s set was standard metallic-punk though, getting a little samey after a while.  “Love Under Will” was a standout, showing the great promise the band has when they balance their fury with a little restraint, à la Baroness. 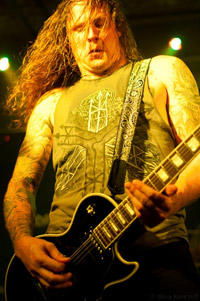 The members of Baroness would thank the audience many times towards the end of their set, now realizing more than most how lucky they are to be where they are.  During the first half of the show, this understanding went unspoken, but with their body language sending the same message.  Metal this heavy is usually its own kind of fun, but this was fun in the traditional sense too.  The band was clearly happy to be back and the crowd was happy to have them back. Some signs of a hastily-assembled tour with a half-new band could be seen.  Several times Baizley winced at notes that few others were likely to even notice, but this was a party, not a recital.  Overall, the new members fit in well.  Baizley and guitarist Peter Adams were already the focal points of their live show before the accident, so there was space for bassist Nick Jost and drummer Sebastian Thomson (formerly of Trans Am) to ease their way in. 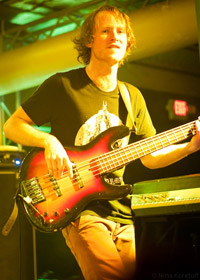 The accident happened less than a month after the release of their double album Yellow & Green (QRO review), so the mere chance to hear songs that are now old favorites like “Eula” live for the first time was more than enough to get excited about.  After the obligatory “one more song” chant, Baroness returned and played two; all that was left of the songs that they had prepared as a new band.  After being sidelined for almost a year, Baroness is back and they are a force.  Get excited about where they will go next.