Basia Bulat : Heart of My Own

What better to name a dozen songs of unwavering love, desperate longing and heartfelt emotion?... 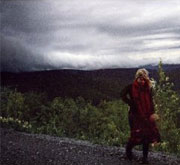 The second full-length offering from London, Ontario’s folk-pop darling Basia Bulat is aptly titled Heart of My Own.  What better to name a dozen songs of unwavering love, desperate longing and heartfelt emotion?

Click here for photos of Basia Bulat at 2016 Newport Folk Festival in Newport, RI in the QRO Concert Photo Gallery

Click here for photos of Basia Bulat at TT the Bears in Boston, MA on September 21st, 2010 in the QRO Concert Photo Gallery

Heart of My Own is a warm collection that fuses a chamber pop and classical folk sound.  Bulat switches from upbeat numbers to quiet reflective pieces seamlessly, and despite a common thread throughout the album, she somehow manages to make every song unique.  Lyrically, the record is built on a simple sort of poetry.  Any sense of simplicity is quickly unraveled though, amid the collision of traditional and modern arrangements and instrumentation.  Heart of My Own features autoharp, banjo, ukulele, and flute, as well as piano and acoustic guitar, all of which speak to that collision.  In terms of vocals, Bulat is quite exceptionally gifted.  Not unlike Serena Ryder, Basia’s voice possesses a rare and beautiful sort of coarseness.  That it is capable of such raw power as well as warm tenderness is truly exceptional.

Though the mix of both power and tenderness on “Sugar and Spice” and “Gold Rush” are especially notable, the album really reaches its peak amid the pure softness of “The Shore”.  The soft plucking of strings and gentle piano lure the listener in to a reflective place before soothing gang vocals clear everything on the mind.  The line “I love you so” is almost enveloping as the song fades into another quiet ballad, which drives into yet another upbeat song.  The album then closes somewhere between the two on the intriguing organ-infused song, “If It Rains”.

Heart of My Own contains twelve original songs that stand on their own two feet.  While not incredibly overwhelming, they are the sincerest and most genuine songs a person can offer.  From the bottom of that heart of her own, Basia Bulat has put out a worthy collection of deeply personal and intimate songs.