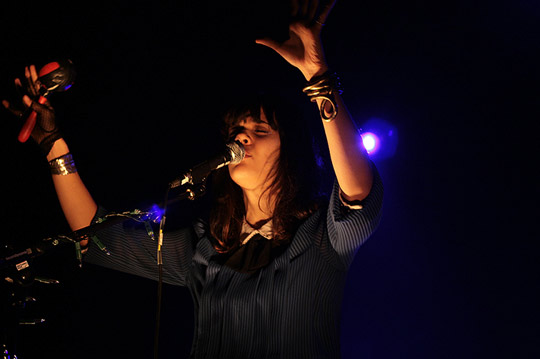 Click here for photos of Bat For Lashes at Great American Music Hall in San Francisco, CA on June 13th, 2009 in the QRO Concert Photo Gallery

On Wednesday, October 14th, the stage at Manchester Academy in Manchester, U.K. is filled with fantastical images conveying the desert at night.  Natasha Khan, i.e. Bat For Lashes, arrives wearing a lace hand glove and a pleated navy dress.  The sound of violins and deep drum tones begin to take a dominant role.  The show begins. 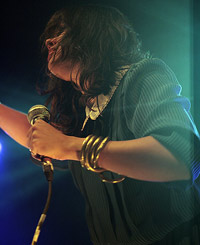 Vocally Khan’s performance is intense and flawless on stage.  She immerses herself in to the music and you can see this in her facial expressions.  Creating a very focused performance full of passion, intensity and grace, Khan holds her self in an innocent child-like stance and opens her self up to the crowd.  Standing barefoot, Khan pours her heart out to the audience with tales of love and woe, visually like a child lost in the wilderness trying to find her way through the night.  Khan certainly sang like she meant every word.

Her imagination fills us with stories and images of pain and anguish, a sense of searching and a taste of hope, love and lust.  Natasha Khan takes these aspects and makes them beautiful, beautifully poetic fragments of life-long journeys and experiences, giving off this kind of gypsy-style free spirit aura.  It almost seems that Khan has picked up these intense stories from the ether to share with us all. 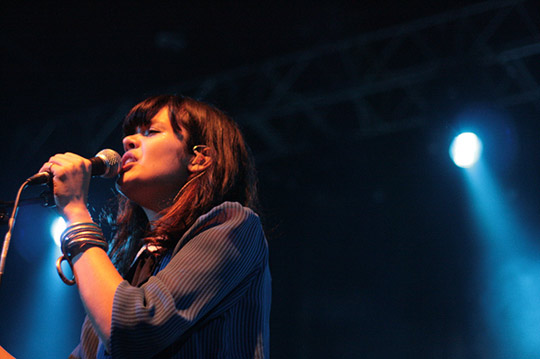 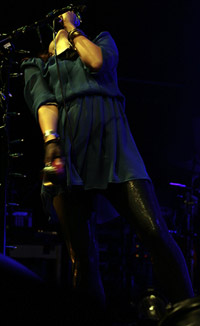 The highlight of the evening was the encore.  Khan sang a solemn duet stood closely to a TV set.  The stage became darkened, looking like a postmodern film-noir scene.  It seemed rather surreal as the visual alter ego of Khan unpredictably sang back, complimenting her vocal tones.  It was a mesmerizing duet with the character that Khan had invented after being inspired by Hubert Selby Jr.’s book, Last Exit to Brooklyn.  ‘Pearl’ came to Khan after she read the dark tragic story of the female prostitute known as ‘Tralala’. 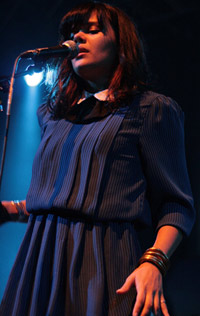 Most people interpret Pearl as Khan’s alter ego.  However in a recent interview with Pitchfork (link), Khan explains this concept in more detail:

Pitchfork: A lot of people – a lot of reviewers, anyway – seem to be misinterpreting Pearl.  “Oh, it’s this alter ego.  Beyoncé, Sasha Fierce!”

Khan Khan: Oh, it’s so gross, yeah.  That’s really not what it was.  It’s so funny how people just instantly make everything black-and-white, but actually, and I’ve said this loads of times, it really was like an art project for me.

It was a magical enchanting evening.  The captivating songstress looked cross between a rock chick and Dorothy from The Wizard of Oz, except she was missing the shoes!  The band members connected wonderfully together.  The sound of the drums overwhelmed the room and vibrated through our bodies and the high pitch violin strings hit out at our hearts.  Fantastically diverse blends of ancient sounds filled the air.  The stage was a piece of visual art, mixing blends of current and past trends in a very stylish way.

Bat For Lashes live at Manchester Academy in Manchester, U.K. on October 14th, 2009: 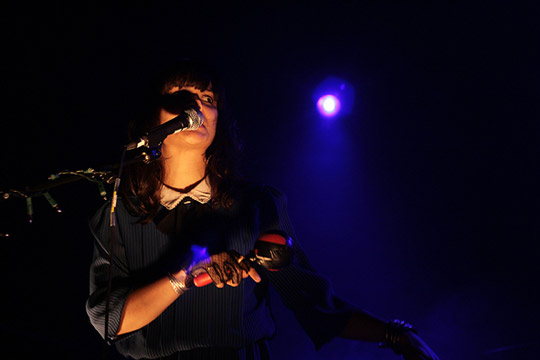