There are unexpected and speckled spots along the rutted logging road of modern music where you will trip your toe across some kaleidoscopic coral.... 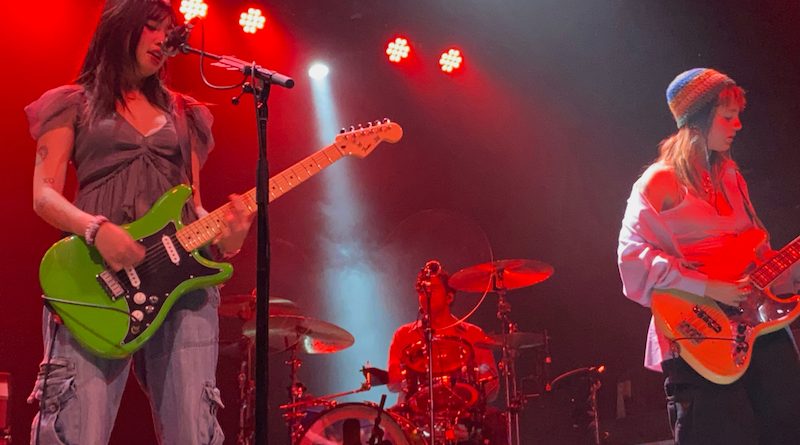 There are unexpected and speckled spots along the rutted logging road of modern music where you will trip your toe across some kaleidoscopic coral. Anytime you get that Daft Punk-designed kind of lucky, you should run with it, but when said rainbow ear-ecosystem also resides in a sonic skyscape of pink clouds with dark-toned interiors, you had best stop everything you are doing and not just take note, but take heart – and that all the way to the merch table, with your wallet, mind. If it please the royal court, we pen – pixies stationed here at the portcullis of premier and primal sounds, hereby submit that London’s Beatrice Kristi Laus, known to the listening world as beabadoobee, and Kansas City’s own BLACKSTARKIDS represent two of today’s most engrossing and ear-catching yarn bombs for your lugholes. Both Dirty Hit signees, beabadoobee and the BLACKSTARKIDS banged up Atlanta’s Buckhead Theatre together on Thursday, November 11th, and it all felt very like a magnum of champagne to the face.

Click here for photos of BLACKSTARKIDS exactly a month later at Stage AE in Pittsburgh, PA in the QRO Concert Photo Gallery

Click here for photos of BLACKSTARKIDS at 2021 Riot Fest in Chicago, IL in the QRO Concert Photo Gallery

You can pretty much assume that you have not just arrived, but already been cool the day that the anointed seismologist of underground zeitgeist that is Iggy Pop puts two of your songs on his latest BBC Radio 6 Sunday sonic-cocktail playlist. BLACKSTARKIDS’ “Juno” and “Fight Club” were both thus recently Iggy-inducted, and with that any unfounded doubts still harbored by the foolish few who had not been onboard with these hooky hawk moths since “Acting Normal” or before ought well and truly to be dissipated. When The Babe Gabe, TyFaizon, and Deiondre bounce out in tandem at Buckhead Theatre, they look and sound exactly like the toy-splosion you were completely sure your favorite plushies engaged in every day the moment you left for school as a kid. These toys have teeth, however, and they were displayed to be finely-sharpened and acutely applied instruments of social awareness as BLACKSTARKIDS somersaulted into their latest brilliantly titled single All Cops Are Bastards to total and warranted audience joy-rupture.

Tearing straight into “Sounds Like Fun” and “Jimmy Neutron”, BLACKSTARKIDS is a band that makes you wish the world would bring back the 1980s mall tours that were once the celebratory staple of any band or solo star this obviously destined for greatness. This is a band built for the kind of alterna-bored weekends that turn into Mondays remembering how much fun it really all was. BLACKSTARKIDS are unafraid of talking absolute gubbins to anybody and everybody in their loose-cannon lyrics, whilst they actively use their artistic expressions and spasmodic manifestations on Puppies Forever, their most recent record release, to better the hijinks-splattered scenery for all, whether you are in their beat-splendid blast radius or not.

“Piss Drunk Kids”, in the live setting, comes at you like a verbal pie fight crawling with porcelain crabs and comber fish from space, and “Love, Stargirl” is an oracular olfaction so sweet as to need bottling so it can be liberally sprayed on one’s neck and wrists every day. BLACKSTARKIDS exist as their own insult-comic troupe against every sadistic Black stereotype and oppressive moral manqué that ever prevented their predecessors from being just exactly this free and this futuristic and this funkadelic. Think N*E*R*D meets Living Colour colliding with A Tribe Called Quest, who then all freestyle together in an impromptu Jay-and-Silent-Bob-style convenience store rave. Like mutant unicorns cast in gleaming obsidian, BLACKSTARKIDS give the sleeping suburbs of your brain a sympathetic reconditioning toward revelry – and the communicable union they share with their fans in the concert context is the punk-fusion Christmas cookie swap party of all time. Don’t miss it for anything, even if you are beyond strange and claim not to like cookies.

Click here for photos of beabadoobee exactly a month later at Stage AE in Pittsburgh, PA in the QRO Concert Photo Gallery

Click here for photos of beabadoobee at Brooklyn Steel in Brooklyn, NY on November 6th, 2019 in the QRO Concert Photo Gallery

Meanwhile, most of us have been in quiet, respectful love with beabadoobee since 2017’s “Coffee”, which first glimmered in our faces all of the phantom fairy charm we would come to recognize as her signature. The green in her voice made us feel warm inside for sure. When she walked out at Buckhead Theatre, nonchalantly plugging in her Fender Mustang like the littlest of Cobain creatures, and opened with “Sun More Often”, ‘love’ sort of stops being the right word because it is not quite big enough for what tiny-framed beabadoobee will call out of your chest in the real.

Touring in support of her second full-length, Our Extended Play, she gives you vocals like blooms of moon jellyfish and tangled mangroves. You immediately realize that “bedroom album” only applies to her initial offerings in the sense of their enclosed vibe and where she happened to be ensconced for some of her recordings, not at all in the way of the locality these sounds live in and emanate from, which is someplace stretching across multiple skies. Our Extended Play was co-written and produced by George Daniel and The 1975’s Matty Healy, both also Dirty Hit labelmates of bea’s and decidedly star-aligned song conspirators for a girl who appears to have been born already in possession of the drift of dreampop.

When she smilingly hands the worshipful crowd “Care”, one they have been eagerly awaiting, her delivery takes you to a world of bleeding lithographs sat on enchanted mantels. Simultaneously, seeing her fret those jangling chord curtains that close so delicately around her bravely raw lyricism took some of us old skool grunge gals right back to The Muffs and Lush – places no one, flannel-inflected or otherwise, should ever leave. For “Dye It Red”, all about the churn and burn of pig butchery that is misplaced love, observers could see in her facial expressions that she has lived these little nuances of control that women in particular frequently relinquish without realizing it in the name of prioritizing their partners. A degrading tragedy, always, but especially when they’re “not even that cute.” If you have soldiered through a bad breakup of late, beabadoobee will be glad to sonically snatch back for you everything you fervently wish you had never given.

By the time beabadoobee got to the aural ice wine of “She Plays Bass“, Laus’ vibrant allure has painted its way across every adoring kisser, and you realized she is truly splitting the difference between Kelly Deal and Belly’s Tanya Donnelly as far as woman-cool goes. She plays to her charms while weaponizing them, a gift only wielded by other distinguished outsider artists, like Adam Driver and Andrew Wyeth. Speaking of female bass players, an astute concertgoer could go see this bodacious band just for the sheer delight of watching Eliana Sewell, beabadoobee’s fire-mistress of the fat strings. Sewell was mesmerizing as she seemed to dance to the sounds of scintillating sea grass only she can hear around her, laying down steady and smart bedrock notes that drip like Dali clocks in a submerged meadow.

The entirety of beabadoobee’s live set is a collection of declarative mood ring pieces and fragmentary fractals reflecting different angles of her jungle-journey through love and life in the digital age. She makes piercing visual and lyrical references around waiting for phone calls and text messages, many of which never come. The sensual melancholy of a song like “Cologne“, one of the most atmospheric Aristotle’s lanterns on Our Extended Play, can make you imagine that its unyielding vulnerability would call for a different presentation when performed. Yet bea stood there and delivered those honest, intimate lyrics like she was still all by herself in her creative cavern, dreaming toward the window.

What seeing beabadoobee live will do for you – beyond giving you hope for the future of proper guitar music played by genuinely gnarly girls – is make it clear that what this band’s magnetic aesthetic is about has nothing whatsoever to do with the nostalgic feel it evokes in many of us who lived through the first incarnation of this look and sound in the early 1990s. Laus and the crew are not actually doing any calling back – they are naturally of a time they did not live through – and there is some bona-fide grunge magic in that glorious fact for certain.

Even if the holidays have you facing chores that are growing arms and legs, go see these eclectic echinoderms if you get any sort of chance. BLACKSTARKIDS and beabadoobee cannot be touched for delicious, double dirty hits.