While the Randall’s Island was raging to bass drops, the Lower East Side was entranced with a different kind of electronic music.... 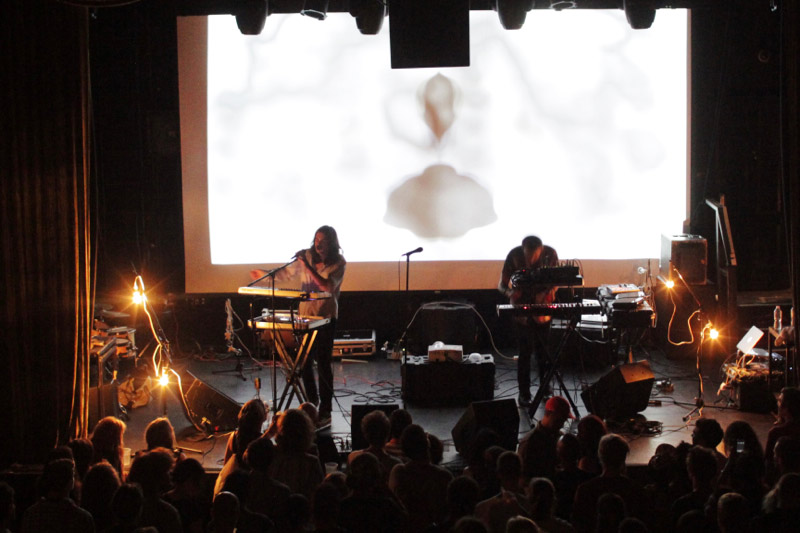 While the Randall’s Island was raging to bass drops, the Lower East Side was entranced with a different kind of electronic music on Saturday, August 31st.  Indie label Ghostly International’s Beacon and Shigeto stopped by the Bowery Ballroom (QRO venue review) for their co-headlining North American tour.

Opener Heathered Pearls gave a soft start to the night with tracks from his 2012 album, Loyals.  Complementing his ambient tracks, two ‘still life’ performance artists sat on stage, eerily staring out into the crowd while handling faux flowers.

The crowd nearly tripled in size as Shigeto’s set came around.  Along with the usual Mac-MPC combo, Zachary Shigeto Saginaw’s solo performance included a live drum set (complete with chimes!).  And it’s best if noted upfront – Shigeto’s set was absolutely incredible.  From the moment he laid set his finger till the second he dropped his drumsticks, Shigeto captivated the entire venue with his intricate beats and artful percussions.  His set consisted of tracks from almost all of his EPs and LPs, including No Better Time Than Now, which was released just last month.  Given Ghostly International’s close involvement with visual arts, the beautiful backdrop and lighting did not come as a surprise – the minimalistic, kaleidoscopic video works were just as stimulating as the songs themselves.  The audience of course did their part, nodding and sway-dancing with emotive expressions, particularly during the familiar melodies of “So So Lovely”, “Ann Arbor Part 3 & 4”, and the closing track, his popular remix of Tycho’s “Adrift”.

Beacon took over soon after.  Their set was just as dynamic both sonically and visually, moving the crowd with their hushed, haunting vocals and muffled dance-beats.  But it seemed like half of the audience was gone after Shigeto left the stage.  Some that were left retreated to the back bar and interrupted the isolated sounds set with chatter.  Regardless, the duo gave a strong finish to the night with an encore including “Feelings Gone”.