By Sunday exhaustion had set in. But on the plus side the sun was shining again.... 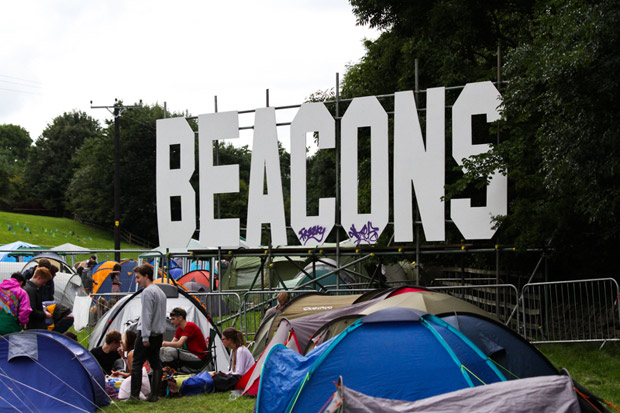 With a spectacular setting surrounded by hills just outside Skipton, on the fringes of the Yorkshire dales, the Beacons calls itself a ‘Boutique Arts and Music Festival’. I’m not sure what that means exactly, but it certainly has a relaxed and comfortably chilled atmosphere Friday to Sunday, August 16th to 18th. It’s not the place to go to see household names or TV show winners or faded pop stars with careers to resurrect trying to reassert their credibility by slumming it ‘round the farm circuit. 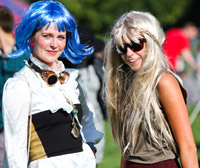 This is an event aimed at people who like music, who take music just a little bit seriously and who like to hear new and surprising things, but it’s also aimed at those who just want to have a good time. It’s somewhere to come if you want to hear the next big thing and go back home and impress everyone with your extensive knowledge of new music, but if you were just looking for a great festival to head off to with your mates to drink beer and eat pie and peas (this is Yorkshire after all…) and sit on straw bales and let a little bit of music drift by, well Beacons would be good for that too. 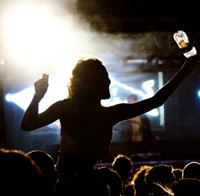 There are lots of critically acclaimed performers, prize nominees and prize winners, lots of people who may be on the verge of being huge – ‘the stars of tomorrow’ as they used to say on some show or other – and a range of music that encompasses grime, rap, punk, rock, folk, country, blues spread over six stages. Three of the stages are exclusively devoted to dance music on which I am entirely unqualified to offer any opinion, but there were a lot of people dancing exuberantly so I guess it was pretty good and in the year in which The Guardian announced that dance had finally toppled indie as the main staple of the music fest, it seems pretty clear that this is the way forward.

There was plenty going on outside the music stages, of course, with an arts area containing gallery spaces, fancy dress fabrication, lectures, screen printing and magazine making and roving entertainers, hoop artists, guerrilla soft core pornography and tent blessers.  There was also a cinema tent that hosted a Q&A with Shane Meadows, but entry required removal of footwear and this was further than I was prepared to go.  To paraphrase the immortal Sam Fox, the boots stayed on, so we didn’t get to see any films or ask intelligent questions of any film directors.  Instead we visited the ‘Vegetable Olympics’, where I proved to be remarkably adept at pitching new potatoes into wellington boots.  It’s a useful skill to be aware of.

The main stage, sponsored by Loud and Quiet Magazine, was housed in one of the two large big tops that dominated the main area. It boasted an impressive stage lighting rig, which we were told (by one of the bands – I’m not sure which) had previously seen service with JLS. This being a festival for proper musos, the assembled company dutifully booed the stage rig as if it were a spy sent by the Simon Cowell organization to undermine the credibility of the festival.

A smaller tent (which could have done with being a lot bigger – there were frequently a couple of hundred people listening from outside, even in the rain) housed the You Need To Hear This Stage and offered a range of bands from indie through to punk. The smallest of the stages – the ELFM Stage – featured mostly acts from the Leeds-Bradford pub/open mike circuit.

By Sunday exhaustion had set in.  But on the plus side the sun was shining again.  Given the past history of the Beacons, which became a mud slick last year (QRO recap) and was rained off in 2011 (QRO photos), to have got away with just one damp day in three was a triumph. 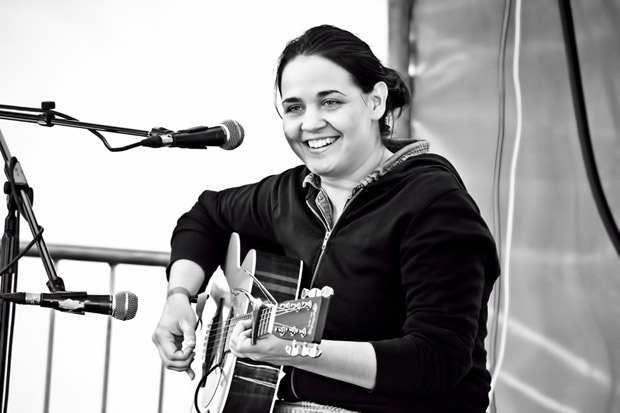 To celebrate we spent a lot of time in the Arts area, making t-shirts and drinking tea and admiring people, until it was time to head over to listen to some very sweet tunes singer songwriter Steph Stephenson on the ELFM stage. (that bit previously where I said we never went back there, that was a lie…) 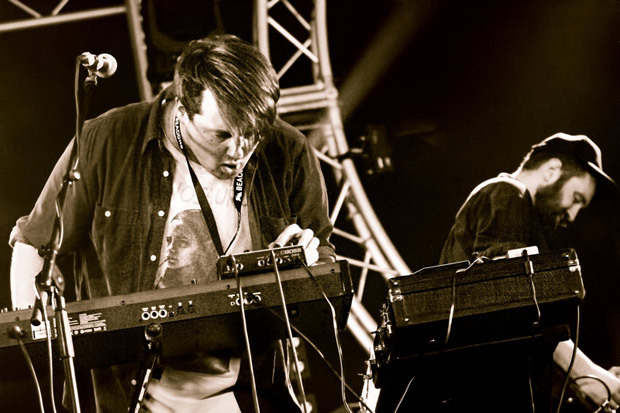 Hookworms on the LAQ proved to be one of the highlight of the festival – an explosive mixture of echoing vocals, huge riffs that roll on and on, great drumming and then extended feedback loops which create a strange, uneasy atmosphere until the band kick in again really loud.  This was the first time I’d seen them and I shall be keeping an eye open for shows near me. 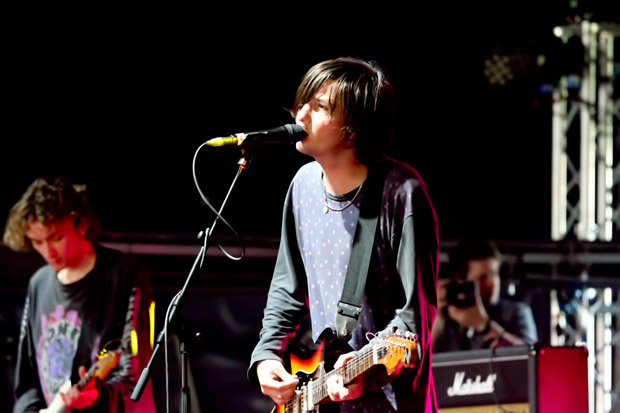 Afterward we did the unthinkable and sneaked off site for a couple of hours to eat excellent fish and chips in the car park of Tesco’s in Skipton.  Non-stop glamour.  Then it’s back to the soundface with Splashh on the LAQ – expansive psychedelic surf rock that booms round the marquee, with loads of reverb and a sound that reminds you that one of the best things about being a musician is that you’re allowed to stay in bed all day. 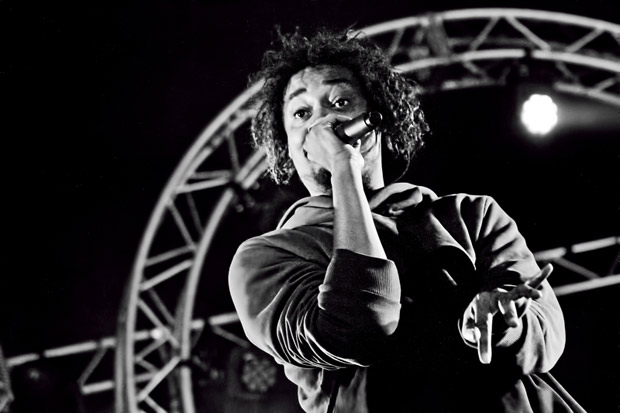 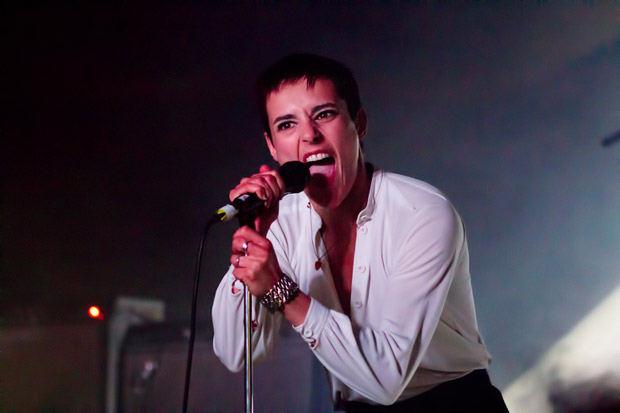 After the quick fire venom of Danny Brown it would have been good to find somewhere quieter, but failing that we went along to catch the end of a set from Savages that has been described elsewhere as the best of the festival, and from what we saw I wouldn’t want to argue.  They’ve had a good year, with Silence Yourself (QRO review) performing well in the charts, and lead singer Jenny Beth has amazing stage presence, aloof and vulnerable at the same time, while the band deliver high power art-house post punk of a high order.  I had previously noticed that another publication had described their performances as “frottage inducing,” and as the tent got uncomfortably crowded we decided to withdraw before things got any stickier. 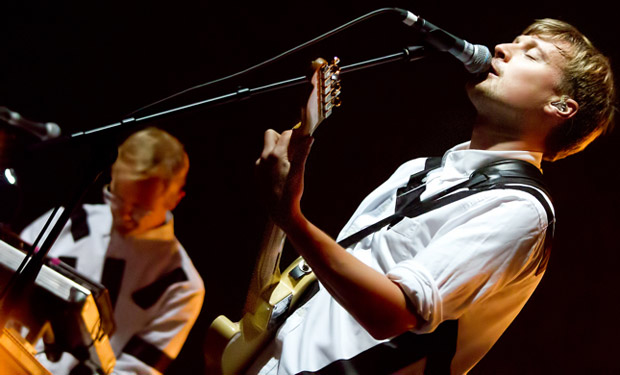 Which left headliners Django Django in the L&Q – a full house full of anticipation and they didn’t disappoint with a set full of bouncy psychedelica that had the whole place dancing (and, for “WOR”) jumping up and down in unison.  The band took the opportunity to announce that after several months of endless touring they were taking a break.  Perhaps they needed a rest, if so they weren’t the only ones.