Bear Hands are clawing their way to the top of the pile.... 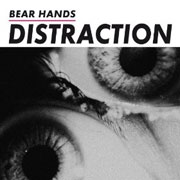 Garrison Keillor might have described his fictional Lake Wobegon as the place where “all the children are above-average,” but that lightly sarcastic statement could also apply to the Brooklyn music scene, where seemingly every act is trying to stand out in some way, any way, amongst the multitude.  Bear Hands were already a cut above in skill and approach on 2010 full-length debut Burning Bush Supper Club (QRO review), and toured round-and-round showcasing it – and keep it up with follow-up Distraction.

One thing a lot of indie-rock acts, from wherever, seem to do is delight in hip-hop, even though they indie-rockers are usually white boys from the safer parts of the country, and when does hip-hop ever throw some love back at indie?  Yet Bear Hands actually have the cred and don’t overdo it.  Killer single “Giants” (QRO review) has the awesome line, “Never been to jail / ‘Cause never get caught” (Burning Bush had “Crime Pays” – QRO video), and follows that up with, “ODB get it right from the start” – but this is the band that toured with Wu-Tang’s GZA (QRO photos of Bear Hands on tour with GZA).  But this isn’t white-boy hip-hop or, god forbid, rap-rock, but rather the energy and meaning of hip-hop done through indie-rock, albeit with some killer beats.

“Giants” is so good it does threaten to overshadow the rest of the album, but Bear Hands keeps the beats strong throughout.  They do quiet/loud better than most others on “Agora” and “Bad Friend”.  They completely pull off the pressure to “Peacekeeper” – then follow that up with the poppier “Sleeping On the Floor”, smooth “Party Hats”, and sad indietronic loss “Thought Wrong” to close.  Even though the beats are more prominent with Distraction, Bear Hands haven’t lost their variety.

With so many artists and such a greater chance of success, Brooklyn is the ultimate Darwinian musical struggle these days in indie-rock.  Bear Hands are clawing their way to the top of the pile.