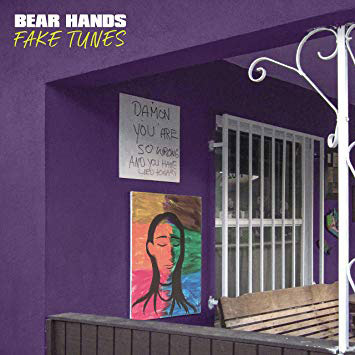 For more than a few years now, indie-rock acts have claimed to be influenced by out-of-genre styles such as hip-hop and EDM, but it’s hard to see it in their music, and it can come off as just attempting to not be all ‘arty’ and namecheck more popular styles. And then there are the acts that actually are influenced, or rather attempt to mash them in for a poor stylistic mix, which satisfies neither the masses nor the critics (kind of like the ‘rap-rock’ of the nineties). That is why it’s so impressive that Brooklyn’s Bear Hands actually pull off putting indie-rock sounds over tech/hip-hop beats, never more so than on Fake Tunes.

Recorded after the departure of guitarist Ted Feldman and out in Los Angeles after singer/guitarist Dylan Rau (QRO interview) moved there to address drug addiction, the beats are even more at the fore. It’s almost as if they took the success of 2014’s “Giants” (QRO review) and 2016’s “2AM” (QRO review) and ran with it, leaning into rhythms that you’d be more likely to find out of a DJ. That’s most so with opener/single “Blue Lips”, which also features great guest vocal work by Ursula Rose. Rau’s outlook isn’t one-note, as there’s the brighter closer “Confessions” (also with Rose) & “Mr. Radioactive”, the catchier “Pill Hill”, and even the resigned “Clean Up California” about his own struggles (which is a subject treated not nearly enough in popular music, which is too often all about the party, and not about what all that partying does to a person).

QRO has long wanted these longtime ‘Friends of the Q’ (QRO spotlight on) to get big, as they’ve got so many elements to do it, as well as actually being good. Perhaps they’re too artistic to be as big as the likes of Twenty One Pilots (who they recently toured with), and too tough to pin down, genre-wise. But that’s because they actually successfully mix their influences into something special.

The Rooftop at Pier 17