On a humid night in St. Petersburg, Florida, the year-long lockdown and silence came to an end as the sounds of heavy guitar riffs, bellowing drum beats, and hundreds... 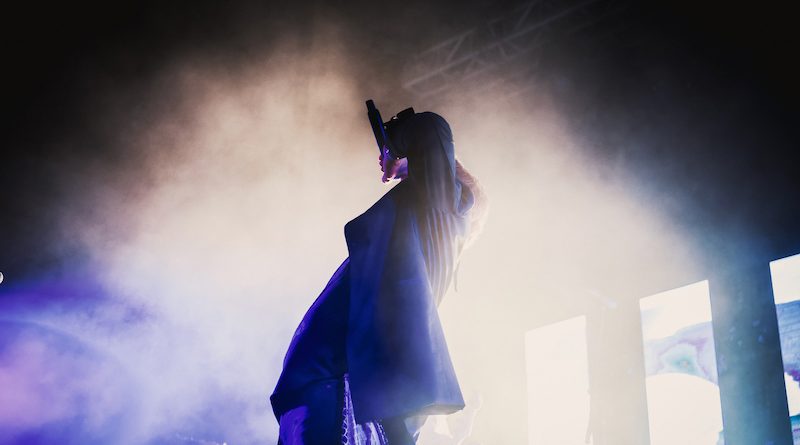 On a humid night in St. Petersburg, Florida, the year-long lockdown and silence came to an end as the sounds of heavy guitar riffs, bellowing drum beats, and hundreds of eager fans erupted from the shoulder-to-shoulder packed Jannus Live theater. On this Wednesday night, September 8th, hardcore punk band Beartooth, hailing from Columbus, Ohio, brought their Below Tour to the city. With opening act Dragged Under and well known hardcore band Wage War prepared to excite the crowd, the night  be nothing less than exhilarating.

A band that is relatively new to the scene, Dragged Under, started off the show. The band formed in 2019 in the members’ hometown of Seattle, WA and have since labeled themselves as “the voice of the fed up.” Releasing their debut album The World Is In Your Way on January 17th of last year, and a deluxe version last November 15th through Mascot Records, the band quickly rose to prominence when the album reached 50 million streams on Spotify.

Entering with a flurry of kicks, lead singer Anthony Cappochi tore into the set with a fervor in his voice. The band opened their set with the song “Instability” off their debut album, and readied the crowd for a night of headbanging and fist bumping with their electric thirty minute set.

After a quick transition, Wage War was soon ready to take the show further. After forming in 2010 from nearby Ocala, Florida under the name Empires, the band has undergone many changes and new members from their beginning. After releasing their EP The Fall of Kings in 2011, the band released their debut album, Blueprints, in 2015 after signing the Fearless Records. In the years following, Wage War released two more albums in 2017 and 2019, and have a fourth album, Manic, set for release on the first of October this year.

As the cheers of fans filled the air, they soon changed their cheers to match with the harsh vocals of lead singer Briton Bond as the iconic opening line of “Stitch” from their 2017 album Deadweight;

“Leave me in the dark with a hole for a heart

As low as I can get, burn the bridge, rip the stitch out

Without a second to lose, guitarist Seth Blake and drummer Stephen Kluesener ripped into their instruments as Bond moved across the stage with a blur of speed. Moving into their set, rhythm guitarist and clean vocalist Cody Quistad took the front with several songs while Bond backed him up with his raspy, dirty vocals. After a nearly one hour set, the band closed out with “Low” from their 2019 album Pressure.

Click here for photos of Beartooth at O2 Academy in Leeds, U.K. on February 7th, 2015 in the QRO Concert Photo Gallery

As the sun began to set on the bustling crowd and city, the stage was set for Beartooth to make their appearance. The band was first formed by Caleb Shomo in Columbus, Ohio, in 2012. Currently consisting of Caleb Shomo on lead vocals, Oshie Bichar on bass, Connor Denis on drums, Zach Huston on lead guitar, and Will Deely on rhythm guitar, the band signed to Redbull Records in 2013, and subsequently released their first EP Sick on July 26th, 2013, and later their first full length album Disgusting on June 10th, 2014. Following these, Beartooth released a second album, Aggressive, on June 3rd, 2016, a third album, Disease, on September 28th, 2018, and their fourth and latest album, Below, on June 25th, 2021, followed by the current fall tour. During this time, the band received Metal Hammer Golden Gods award for Best Breakthrough Band in 2016 and a Loudwire Music Award for Breakthrough Band of the Year in 2017.

As the lights dimmed and the in house music died off, the crowd erupted into a tremendous roar of cheers and screams. The band soon took the stage with their titular song “Below” off the new 2021 album. Caleb Shomo appeared as a silhouette in the purple and white glow of the lights, which quickly transitioned to a flashing strobe of whites, yellows, and reds. Moving down their set list, Shomo moved about the stage with pure determination, barely taking a second to stop.

As their set went on, the band took a break for Shomo to share some words with the crowd, discussing the past lockdown and the issues they suffered during the hard time. Speaking of their despair and worries, and the near times the band almost called it quits, Shomo addressed the crowd on their support that kept them going through such a rough period of time and history. With the crowd finding a new source of energy, the band was set to close out their set. Ending the main part of their set with“In Between” from their first full length album, Shomo and the band stepped off stage as the lights dimmed.

As the crowd screamed out for an encore, a man in the pit screamed out “Caleb! Caleb! Caleb!” As the screams echoed into the air, the band took back to the stage to close out with two final songs from their newest album. Starting with “The Past Is Dead”, the band ripped through the song and quickly changed into “The Last Riff”. Ending their set with their full instrumental song with each band member unleashing their heart and soul into each note, the crowd and band alike were exhausted from all the energy they had left before saying goodbye and heading home for the night.

With such a memorable set, many fans stayed outside the venue for a chance to meet with the band, while others crowded to the merch table, creating a line that snaked through the venue. Beartooth left the crowd eager for their next visit, and solidified their hold on the city’s metal and punk fans.

The Past Is Dead
The Last Riff

Bleachers – Take the Sadness Out of Saturday Night