<img src="http://www.qromag.com/wp-content/uploads/2011/05/beastieboyshotsaucepart2.jpg" alt="Beastie Boys : Hot Sauce Committee Part 2" />Beastie Boys figured out early in their carrier that avoiding the traps of the hip-hop lifestyle was the... 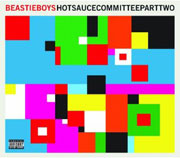 Seven years after the release of the understandably-underwhelming-post-9/11 To the 5 Boroughs, the Beastie Boys are back to their hip-hop roots.  Since then, they have resisted resting on their laurels, producing an instrumental album (Mix Up), releasing a conceptual concert movie (Oh My God, I Fucking Shot That), and for one member, battling throat cancer.  The new album Hot Sauce Committee Part 2, surprisingly preceding HSC Part 1, was officially announced last October and has been highly anticipated since.

Fortunately the trio has had some pity for their fans and has released some tracks and ‘leaks’ in the last couple of weeks, starting with “Make Some Noise” and its music video that’s more star-studded than an NBA All-Star weekend.  It’s a great choice indeed, as it sounds so old school with its catchy beat, gritty organ and witty rhymes (“Leggo my Eggo while I flex my ego / Step off my Seco, dressed up tuxedo”) that you can, once again, feel those Adidas on your feet.

Now that “We got a party on the left / A party on the right”, we can get down to business.  Lyrics like “Non Stop Disco Powerpack,” “How are you feelin’ M.C.A.?  / Well I feel right as we put words on the track / ‘Cause the track sounds tight” give the listener a sigh of relief.  Adam Yauch sounds a little hoarse but he is ready to “rock the House until the break of dawn” on this funky head-nodding drum and bass combo that feels like Ill Communication‘s “Root Down”.

Thanks to Mix Master Mike, each tune in the 16-track album sounds like a gem that would have been forgotten from their previous opuses.  That doesn’t mean the beats and samples feel recycled or dusty – they are fresh, tight, complicated, playful and, just as Mike D, Ad Rock and M.C.A’s voices, they are an integral part of the Beastie Boys sound.  The listener gets whiffs of the past albums like License To Ill with “Say It,” to Hello Nasty with “Ok,” and Ill Communication with “Make Some Noise”.

Of course no B-Boys album would be complete without an instrumental track, the groovy “Multilateral Nuclear Disarmament”, and a throw down, “Lee Major Comes Again”, further reminders that they are still the punkiest rap group around.

One new feature, though, is the guest appearances from Nas (QRO photos) on “Too Many Rappers” (first sung at Bonnaroo in 2009) and Santigold (QRO photos) on the smooth dub “Don’t Play No Game That I Can’t Win”.  And because nothing is perfect (but oh so close), the sound effects added to almost each voice track can sometimes break the spell by muddying the original sound of the Beastie Boys.

The New York trio understood early in their carrier that avoiding the traps of the hip-hop lifestyle was the only way to survive in the industry and 28 years later, they are the one group that survived.  After the huge successes of Ill Communication and Hello Nasty, they could have been sitting at home, counting their cash and release a half-assed album every once in a while (I’m looking at you, U2 – QRO album review), but instead they decided to explore for a few years, regroup and produce what should become their next multi-platinum album.  If Hot Sauce Committee Part 2 does not get the Beastie Boys inducted in the Rock ‘n’ Roll Hall of fame after three previous unsuccessful bids, they will start “Taking MCs down by lethal rap injection.”

The stream can be found here: