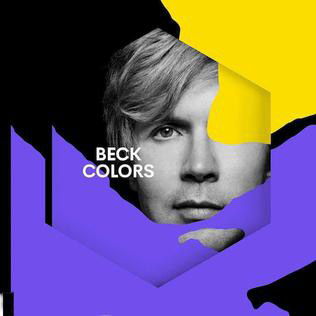 Beck holds a special place in every alternative music fan’s heart. His nineties breakthrough single “Loser” ranks up there with Radiohead’s “Creep” as the weirdest way to start a hit MTV career, and Odelay (QRO deluxe edition review) is justly regarded as a modern masterpiece. Few musicians this side of David Bowie has been as willing to radically change their sound, to go against what was expected and what likely would have been more financially successful. He left the weird anti-folk Beck for giant funkified jams with Midnight Vultures, and then after that commercial & critical success followed it up with the sedate, downbeat Sea Change. In this century/millennium, between the big dance Modern Guilt (QRO review) and Change pseudo-sequel Morning Phase (QRO review), he released an honest-to-god song reader, just transcribed music that you could play on your own. Not that many have earned the right to experiment as much as Beck.

Which makes Colors acceptable, and also disappointing, as Beck experiments in mainstream pop.

Colors isn’t a bad record, and there’s definitely stuff to like on it. “Seventh Heaven” is some superb modern disco-bright, pulled off better than the many other artists these days that try it (if not at all like any Beck that you knew). “No Distraction” has an evening eighties power-soar feel that Beck definitely can do. And songs like the dance-pop “Square One” and big pop/rock “I’m So Free” are definitely catchy and enjoyable.

Ignoring the criticism that Colors ‘doesn’t sound like Beck’ (as he’s an artist who’s been everywhere, sonically), one is still left with the feeling that it does sound like so much of what is already out there. Modern disco-bright and evening eighties are styles that have been revived by a hundred artists right now, and Beck might be better than them, but not significantly better. Meanwhile, songs that ‘sound like Beck’ just sound like stuff he’s already done better, such as the tropicalia-psych to opener “Colors”, or the soft and sweet closer “Fix Me”.

And then there are the pieces where Beck comes off as if he’s trying to keep up with the times, and not accomplishing it. “Dreams” is unremarkable neo-disco, like a lesser track from Arcade Fire’s own 2017 ‘once-innovative alt-icon trying to keep up with the times’ Everything Now (QRO review). The low-key Beck rhymes to “Up All Night” are hardly “Where It’s At”, but rather feels like he wants to be cool. And big dance number “Square One” sounds literally like a million other acts out there today.

Beck has earned the right to roam, and his impressive and diverse musical pedigree maybe makes expectations too high for his studio albums. Is it bad when an acclaimed veteran experimentalist delivers something not that remarkable?