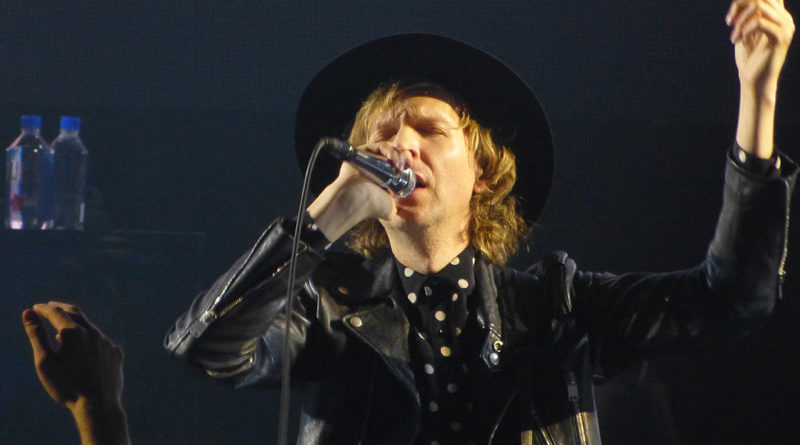 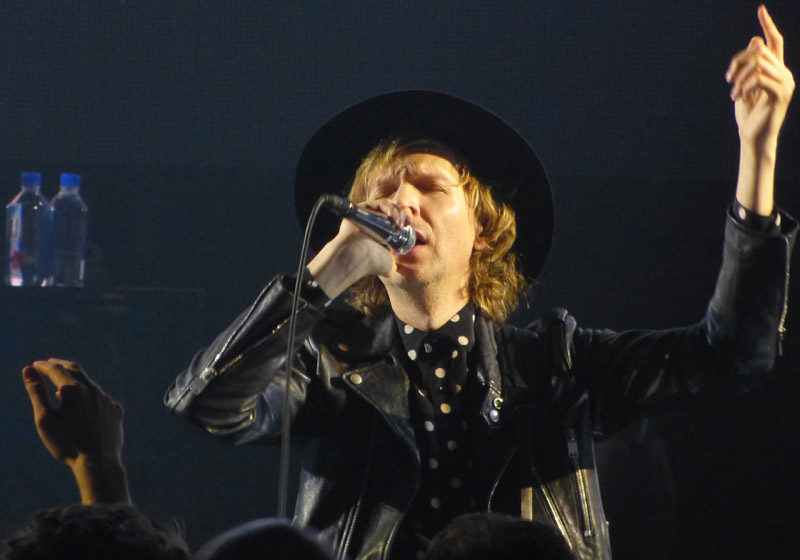 Hilton Hotels, the mammoth hotel brand (that existed long before Paris Hilton) has a ‘Hilton Honors’ program, that rewards repeated guests with frequent flyer-like points, which can be redeemed for special upgrades and even special events, like the ‘Music Happens Here’ series of concerts across the world. The 2017 Music Happens Here season ended on Saturday, December 9th at Spring Studios in New York with the one-and-only Beck.

While a separate space, Spring Studios is right next to Hilton Garden Inn/Tribeca, though the St. Johns Lane entrance was a little hard to find on the snowy night. But once inside and on the sixth floor, there was a great, classy cocktail hour beforehand, which included not just hors d’oeuvres but also sliders & some sort of delicious Monte Cristo with pretzel instead of French toast for bread (given how filling that food was, the waiters were a little insistent in pushing the hors d’oeuvres, but definitely better too much food than too little). And yes, there was open bar, with everything from wine & beer to hard cider and Winter Moscow Mule (a variation on the recently revived & popular vodka drink). One knew that the reception was going to happen, but it was still impressive (and open bar continued throughout the night – also a classy bathroom in the space). 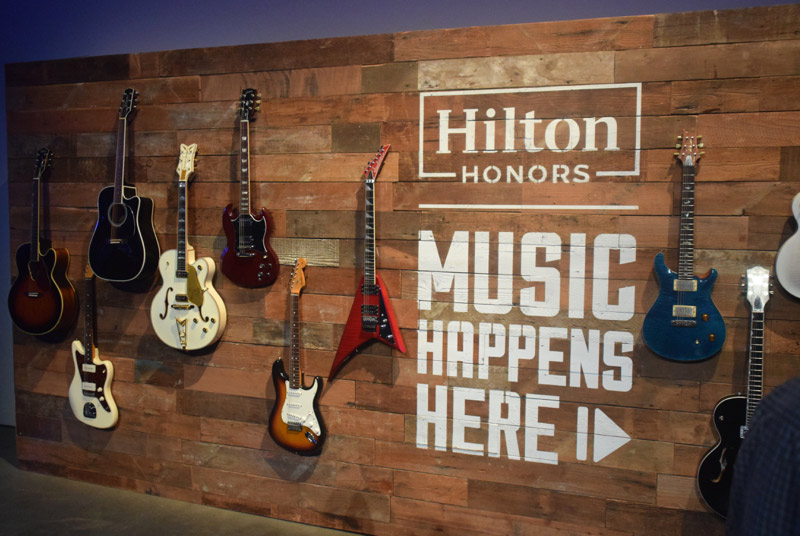 After an introduction & video of Hilton Honors’ Music Happens Here program, Beck took the stage, with full band, and launched right into the classics. With a new, mediocre-for-the-amazing Beck album, Colors (QRO review), out this year, one was wondering what the set list would be. Would Beck favor the new record, or just do the hits? Playing shorter than a usual mammoth Beck show at the intimate space (with a beautiful view over the city on one side), would it feel short?

And then came “Devil’s Haircut” to open the night. Beck’s hits from his breakthrough Mellow Gold–Odelay (QRO Odelay deluxe edition review) nineties era are still his most beloved, probably, if only because they managed to stand out in that great era of alt-music, for being both alternative and accessible. Beck Hansen began his set by playing songs that you’ve always wanted to see live, and never thought that you could see so close, with “Haircut” and “New Pollution” from Odelay, Guero’s own classic “Black Tambourine”, and, yes, Beck’s breakthrough single, the song we all still associate with him most, “Loser” (one Instagrammer at the show described writing the chorus line lyrics, “I’m a loser, baby / So why don’t you kill me?” in her high school notebook, and getting a very concerned meeting with her teachers & parents…).

Special mention needs to be made about how easy it was to get pretty damn close to the stage. The actual studio is a big space, but not big for the big Beck, and with the open bar in the back and soundboard in the middle, a lot of folks weren’t crowding up front. There were also benches on the sides of the front (some either gear luggage used as benches or benches made to look like gear luggage, or both), making it easy to sidle up the side and in close. And a lot of times at exclusive, intimate shows like this, the crowd feels like they’re all VIPs and entitled to said treatment, unwilling to take others there into account and assuming that they’re the only people who matter, but that was not the case this night. It was also not true that everyone there was ‘too cool for school’ and barely into who’s performing, as can happen at sponsored, high-class gigs like this, as, while there were many hanging in the back (spotted Vanessa Bayer of Saturday Night Live & hilarious ‘Sound Advice’ interviews with Kate Micucci of comedy music duo Garfunkel & Oates), there were also many up front & appreciating the show.

[note: it was particularly nice that you could get up front if, say, you were a photographer who spent the first three songs shooting from the photo riser by the soundboard, trying to photograph while simultaneously rocking out to “Loser”, but then could still get close afterwards – and even get drinks during] 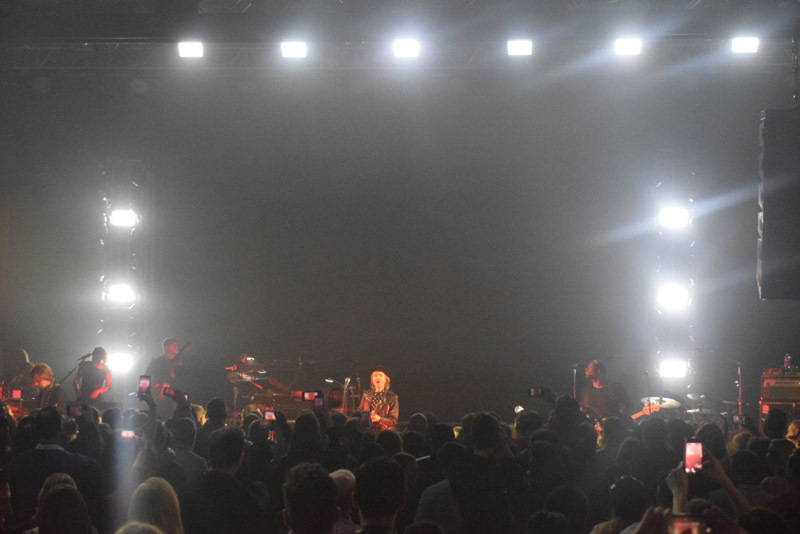 Beck did move into more modern times with “Think I’m In Love” from 2007’s The Information (QRO review), and one from his funkiest record, “Mixed Bizness” off of 1999’s Midnight Vultures, though there was none from his sad, stripped records like One Foot In the Grave or 2014’s Morning Phase (QRO review) – this was not a night for sad songs, despite the weather. Beck mentioned that he was asked to play a song that made him think of New York (presumably requested by Hilton Hotels, to have an exclusive cover), and he talked a bit of how hard that kind of choice would be, given the massive musical legacy of the Big Apple. While listing many acts, Beck said that he always came back to Lou Reed, and did a special rendition of The Velvet Underground’s “Waiting For My Man”.

Before that, someone in the crowd had shouted a request to hear from the new album, “It’s great!” While this year’s Colors doesn’t match up to Beck’s impressive discography or expectations, leaning too much on the current electronic dance wave, behind the curve instead of ahead of it, even those who don’t favor Colors could guess that it would be great live, and it was. Beck delivered four in a row from the album after “Waiting”, with songs like “Wow” and “Up All Night”, that tilt towards derivative on record, becoming alive, live. Beck played two more from Guero, “Girl” and “E-Pro”, the former very in line with the dance of Colors, the latter, “For anyone who wants to, perchance, bang their head,” before going into the encore break, though returning swiftly to the stage. 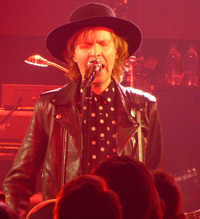 And the encore was “Where It’s At”, literally and figuratively, as Beck delivered maybe the greatest ‘let me introduce my band’ ever. Beck’s backing band always deserves special mention, playing his complicated and multi-instrumental pieces with great energy, and Beck gave them that & more. First was “Where’s It At”, where we all had “two turntables & a microphone” for the Odelay hit, but mid-song Beck joked that the crowd was “getting too out of hand,” and didn’t want to issue a “reprimand,” but needed a “time out,” where he talked about how comfortable he felt with the audience, that they should get to know each other better, and so introduced each member of the band – each of whom got to play a little cover riff of a favorite song of theirs. Bassist Dwayne Moore did some Parliament Funkadelic, while guitarist Jason Faulkner covered a bit of Bowie’s “China Girl” (complete with Beck changing the title line to, “Little Jason Faulkner”). Backing multi-instrumentalists Jake, Alex, and Cecilia, “Collectively known as The B-53s!” did Talking Heads’ “Once In a Lifetime”. Keyboardist Roger Manning did Gary Numan’s “Cars”, but then Beck insisted on a “side excursion,” “This might be the highlight of the night,” as, “in every band worth its salt, there’s someone who can do a Michael McDonald,” and the mustachioed-but-not-bearded Manning (something else Beck pointed out) covered a bit of the former Doobie Brother’s “Find It In Your Heart”. And Chris Conlin on drums brought Phil Collins’ “In the Air Tonight” – as well as, again on Beck’s insistence, doing some licks & slaps on Moore’s bass (“That’s the thing about everyone in this band: everyone in this band can play everyone else’s instrument as well as their own”). Solo artists always praise their backing band, but this time was over-top in praise & excellence, not to mention making the whole performance feel singular and unique, even friendly.

Beck got a little of his harmonica in, as well as jokes about “platinum status” for the audience (acknowledging the corporate nature of the event), before reminding all to return to “Where It’s At” – and yes, that included the great side shuffle associated with the song from Beck, Faulkner, and Moore.

Corporate gigs can be dicey things, with an artist maybe more interested in the paycheck than the performance, and the crowd perhaps more there to schmooze & drink & be seen than actually see anything. December is also not a great time to see shows in New York, or even in America, as the cold weather, combined with Thanksgiving & Christmas holidays, puts a halt on most touring. Snow was falling on Saturday night (and there was a long wait in the drafty entrance to get back one’s coat from coat check), and it was a high-class night (the crowd seemed to have a lot of hotel & music industry types, in addition to actual Hilton Honors rewards members), but it was an awesome December night, as Beck totally delivered for Hilton.