Bell X1 take a step back from ‘tronics and back towards emotion – and still pull it off.... 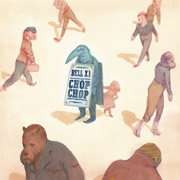 Back in 2009, after Bell X1 finally released Irish #1 hit Flock (QRO review) in America and the departure of guitarist/keyboardist Brian Crosby, the band (who are perhaps the biggest at home in the Emerald Isle after U2) wisely changed their sound from the plaintive, simple emotions of Flock to a far more complex sound, evoking The Talking Heads with indietronic elements on Blue Lights On the Runway (QRO review). The group took that even farther with 2011’s Bloodless Coup (QRO review), but now take a step back from ‘tronics and back towards emotion in Chop Chop – and still pull it off.

Click here for photos of Bell X1 at The Sinclair in Boston, MA on October 11th, 2013 in the QRO Concert Photo Gallery

Click here for photos of Bell X1 at Paradise in Boston, MA on June 8th, 2011 in the QRO Concert Photo Gallery

Click here for photos of Bell X1 at Highline Ballrom in New York, NY on October 9th, 2009 in the QRO Concert Photo Gallery

Lots of acts out there can do restrained beauty and sadness, and Bell X1’s pre-Blue Lights pedigree suggested that perhaps they weren’t one of them, but they do it well on Chop opener “Starlings Over Brighton Pier” – but it is the following “A Thousand Little Downers” and “Careful What You Wish For” where they really start to excel. Singer/guitarist Paul Noonan has a way of being sad while also sly, even catchy – especially when he brings out some clever lyrics that aren’t done in an ‘aren’t I clever?’ way. “Careful” sees him sing in sincere sadness, “Careful what you wish for / ‘Cause these blubs are the fluorescent kind / No one looks good in this light.” Not all of the tracks hold up to this standard, especially in the middle with the fairly simple “Diorama” and “Drive-By Summer” (the in between “I Will Follow You” is the only piece on Chop to retain the rhythmic nature of the last two Bell X1 releases). But “Motorcades” picks it up again near the end, and the group close with an uplifting call to action, reminiscent of more recent Noah & The Whale (QRO album review), in “The End Is Nigh”.

After the disappointment of Flock, the refreshing nature of Blue Lights, and the slightly been-there, done-that of Coup, Bell X1 shifting back into straight sadness and beauty was both welcome as a change, but also something to be wary of given their history. Thankfully, they’ve proved the optimists right.

Bell X1 – Careful What You Wish For