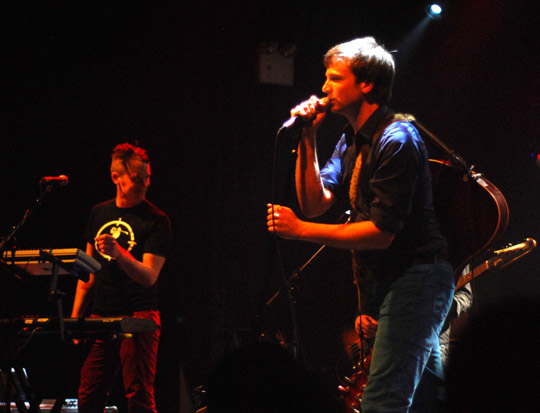 Click here for photos of Bell X1 when they returned to Highline Ballrom on October 9th, 2009 in the QRO Concert Photo Gallery

Click here for photos of Bell X1 at Paradise in Boston, MA on June 8th, 2011 in the QRO Concert Photo Gallery

Since leaving Islands in 2007, Ireland’s number one hit Bell X1 has made serious forays into the New World.  First, 2005’s Flock (QRO review) was finally released in America last year, and the band was able to follow that up in 2009 with Blue Lights On the Runway (QRO review).  However, Blue Lights was a real departure from the sad, beautiful enchantment of Flock and previous Bell X1 records, as the band spread its wings on the Runway, reaching to a more interesting, but also more complicated, sound.  While that brought great improvement, record-to-record, the band could have lost old fans even as they gained new ones.  But their live show at New York’s Highline Ballroom on Saturday, March 14th satisfied both sets.

Manhattan’s classy, up-market Highline Ballroom (QRO venue review) was mostly full of older, more bridge-and-tunnel type of fans, in the city on a Saturday night (it was actually billed as something of an ‘early St. Patrick’s Day show’).  However, there was still a healthy smattering of indie-kids in the audience, thanks to opener Harlem Shakes (QRO spotlight on), who were playing their hometown while on tour with Bell X1.  Unfortunately, the Highline show was an early show, so if you arrived at, say, 8:00 PM, you would have missed the excellent Shakes lay down tracks from the excellent Technicolor Health (QRO review) – which is what happened to your correspondent (seriously, what’s up with the Shakes not being able to play at a regular time – for their Southpaw show exactly month/four weeks earlier, QRO review, they didn’t go on until 1:00 AM…).  But for those just there for the Shakes (“I could care less about [Bell X1]”, one NYC indie-press stated before their set), they were lucky enough to get to see an impressive and enjoyable show from the headliners.

Bell X1 certainly knew how to start things off right – with a clip from The Muppet Show.  Kermit the Frog introduced the show’s own Irish musical act, the three most-vocally challenged Muppets, The Swedish Chef, Beakman, and Animal, dressed in Irish sweaters, singing “Danny Boy” (Animal ain’t just a master of the skins…).  Expectations were high after that great intro, but Bell X1 matched ‘em as they took the stage, hitting up Blue Lights’s openers (in reverse order) “How Your Heart Is Wired” and “The Ribs of a Broken Umbrella”.  The sadder “Wired” was a nice combination of the band’s earlier and more recent work, while “Umbrella” was just as strong and interesting as on record.

From there, the band played it roughly equal between tracks of their last three record, Blue Lights, Flock, and 2002’s Music In Mouth – while that still meant Blue Lights had the lion’s share of the set list (QRO photo), Flock and Mouth, being more similar-sounding, could team up to dominate.  The fans did cheer when singer/guitarist (and studio drummer – Noonan was originally just the drummer when the band was called Juniper, but then original singer/guitarist Damien Rice left, so he took a step up) Paul Noonan announced that they were going to do some older songs, starting with Flock’s “Bad Skin Day” and then Mouth’s “Next To You”.  Both sad pieces certainly had emotional weight, especially pleasing the ladies in the crowd, but they did lack for some energy.  However, the band’s “experiment in disco” from Flock, “Flame”, really lit up the place (with an assist from Highline Ballroom’s excellent lighting system, including a pair of mirror balls), and their Mouth breakthrough single, “Eve, the Apple of My Eye” (which first got the band notice in America, because it was played on The O.C. when Mischa Barton share a lesbian kiss with Olivia Wilde – QRO’s Music of The O.C.), really shown in its beauty.

Also really shining was the band’s humor (and not just with The Muppets).  Before “Flame”, Noonan admitted, “I don’t know if five Irish guys should experiment in disco, but you can be the judge of that…”  After “Eve”, he told the crowd that a couple in Philadelphia had said they conceived their child while listening to that song, even named their baby girl ‘Eve’, with which another member of the band told Noonan that, “It’s like you were in the room there with them…” – and Noonan followed that up with a joke about the man in the couple making it all the way to the second chorus (a random screech over the monitor followed that, with which Noonan ad-libbed, “Have we offended the gods?”).  Right after starting Blue Lights’s “The Great Defector”, Noonan had to stop and start again, because his new “toy”, a Casio guitar, was acting up.  And after “Defector”, he told the crowd that, if they tuned in to Late Show with David Letterman on Tuesday (actually St. Patty’s Day), they just might hear that song again (QRO Indie on Late Night TV) – adding that Letterman’s a reputed slave-driver, making “Irish boys shovel coal, and play all week”, a riff on the recent week-long residency from U2 (QRO album review).  Bell X1 get compared to U2 a lot – both are hit Irish band, both were on Islands, both are named after a military aircraft – so that was a nice, cheeky way of getting the comparison out of the way (especially considering their new record harkens more to The Talking Heads).

Despite that humor, sadness dominated the middle of the set, from “Eve” to Blue Lights’s “Blows In” and Flock’s “My First Born For a Song”, but it was the flat-out awesome single “Defector” that was the night’s high point – yes, it’s their catchy single, but catchy in a Talking Heads kind of way that makes it so excellent.  The show naturally slipped a bit from there, but their going-into-the-encore break “Rocky Took a Lover” from Flock really stood up great – but how could it not, with a line like, “’You’re such an asshole when you’re drunk’ / He said, ‘At least I’m okay in the morning’”, not to mention a crowd sing-along?  Bell X1 returned with Blue Lights’s “A Better Band”, a nice sum-up of their recent improvement (though the guitar-grind was a little much – and more importantly, you know what it need?  More cowbell…), but they ended in the past with Mouth’s achingly emotional “I’ll See Your Heart & I’ll Raise You Mine”.

With Blue Lights On the Runway, Bell X1 successfully moved from their tried & true sad heartbreak to a more interesting sound.  With their live show, they successfully please fans of both sounds.