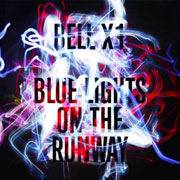 Bell X1 hit number one in their native Ireland all the way back in 2005 with Flock, but it wasn’t until last year that the record was released in America (QRO review).  Thus, that they came out with Blue Lights On the Runway less than a year later isn’t so surprising (or a copy of Wales’ quick-release Celts, Los Campesinos! – QRO spotlight on).  But what is surprising is how and how much the band has improved upon the somewhat underwhelming Flock, adding a good rhythm and clipped beat, along with almost indietronic effects, to the band’s establish melody, making for a record both interesting and enjoyable.

This new mix comes out best on Bell X1’s more upbeat pieces, starting at the beginning with “The Ribs of a Broken Umbrella”, but also including single “The Great Defector” and penultimate “One Stringed Harp”.  All three actually hark back to the classic work of early eighties alt-icon, The Talking Heads, with singer/guitarist (and studio drummer) Paul Noonan’s vocals catching David Byrne just right on “Defector”.  Not as outright art-rock as seminal Heads, but Bell X1 add more harmony and melody to their work.

In the States, Bell X1 is either best known as being Damien Rice’s old band (after which Noonan moved from drummer to singer), or for their single “Eve, the Apple of My Eye”, which played in the background on The O.C. (QRO ‘Best Music of The O.C.’ feature) when Marissa Cooper (Mischa Barton) shared a lesbian kiss with Alex Kelly (Olivia Wilde, now playing another bisexual on another FOX show, House…), and that sad heartbreak isn’t missing on Blue Lights.  While “How Your Heat Is Wired” adapts the new New Wave elements for the more downbeat material, other melancholy tracks play it more straight up.  Sometimes too straight up – the slow and stripped “Blows In” and “Light Catches Your Face” are nice enough, but do make one wish for more of the band’s newer side.  However, the sad loss of middle track “Amelia” and sad coda in finisher “The Curtains Are Twitchin’” both hold up well, their beauty shining without being blinding.

There is one new facet on Blue Lights that Bell X1 really should have left in the hanger: the guitar grind.  On back-to-back “A Better Band” and “Breastfed”, the band starts to move towards the darker, more world music-influenced percussion-esque Heads, but then leavens both pieces with unnecessary, not-so-hot guitar grind.  But overall, Bell X1 has not only lived up to the growth shown on Flock’s lead-off standouts, “Reacharound” and “Flame”, but have gone well past it, in an interesting direction that one doesn’t hear enough of these days, without losing their sweet melody.