Ben Folds Five's Live does a pretty good job of encapsulating how fun it is to see the band in-person.... 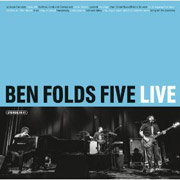 Last year, singer/songwriter Ben Folds reunited with the Darren Jessee & Robert Sledge to reform Ben Folds Five behind their new album The Sound of the Life of the Mind (QRO review), and went on tour in America and beyond (QRO live review).  Now that tour comes to recording in Live, which does a pretty good job of encapsulating how fun it is to see the band in-person.

Live is the first live BF5 record (though Folds released his solo Ben Folds Live shortly after the band’s hiatus/break-up), and one wonders why it took so long: they’ve got a great presence live, with Folds joking with the crowd.  Live also lets the band do a ‘greatest hits’ record without it just being recycled ‘greatest hits’, yet having their ‘hits’ from across different records.  It’s got must-haves for a live show from their first two records, such as Ben Folds Five’s “Jackson Cannery”, Whatever and Ever Amen’s “Brick”, and The Unauthorized Autobiography of Reinhold Messner’s “Narcolepsy” – but being from The Sound of the Life of the Mind tour, it’s also heavy with new songs like single “Do It Anyway”, “Draw a Crowd”, and “Erase Me”.  There’s even a number from his solo days, “Landed”.

A number of pieces are raised live, such as the opening to “Underground”, “this bitch” rockin’ opener “Jackson”, or the sing-alongs to “Landed” and others, but Live reaches its peak in the middle, starting with the improvised “One Chord Blues/Billie’s Bounce”, where Folds jokes that he’s gonna play a song with one chord, not the overly complicated songs he usually plays.  “Do It Anyway” is combined with an overture and “Heaven On Their Minds” – the best combo since “Anyway” and Fraggle Rock (video).  “Brick” needs no humor or combining, as the number about an abortion is just as powerful today as it ever was.  And “Draw a Crowd” sees Folds screwing up at the beginning, but the audience holding the beat & getting praise from Folds (this occurred at the Port Chester, NY show that QRO covered).

Admittedly a number of the pieces feel very similar to the records, like “Selfless, Cold and Composed” and “One Angry Dwarf and 200 Solemn Faces”.  There are obviously going to be songs that you wish were on it, like “Sports & Wine”, “Steve’s Last Night In Town”, “Army” (how about the one from Port Chester? – QRO video), or “Don’t Change Your Plans”.  We hear Folds introduce the rest of the band more than once.  And there’s too much piano noodling on “Narcolepsy”, plus final song “Song For the Dumped” ends with Folds asking the crowd if they want to hear another song – but we don’t get to.  But these are minor quibbles that don’t ruin a wonderful live record.