Out of the ashes of Boston-favorite Girlfriends, Bent Shapes emerges with their new LP Feels Weird.... 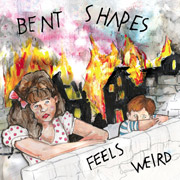 Out of the ashes of Boston-favorite Girlfriends, Bent Shapes emerges with their new LP Feels Weird, an exceedingly literate mélange that will have listeners mentally-annotating the influences.  Feels Weird doesn’t feel weird at all.  It feels like a shout-out to the strums, tones, feedback scrawls, and harmonies of ‘90s-era indie rock heroes that we all know and love.  The underground current that never quite broke through the heavy lather of the grunge movement – the Sebadohs, the Silver Jews, the sorts of bands that filled their albums with a bit too many ‘thinky/feely’ lyrics to capture the spillover of the post-Hair Metal demographic.

Bent Shapes picks up on this overlooked underground of the underground and polishes off some of the rougher edges for the sake of pop economy.  Lead vocalist (and the chief songwriter) Ben Potrykus uses a pitch-perfect pop-punk drawl that keeps the bouncing melodies and choruses on a nice even keel.  There’s a faint SoCal flavor to his vocals, which is a bit mystifying, given how entrenched Potrykus has been in the East Coast scene for years.  But take it as a sign of the indie cosmopolitanism that marks the band, and the whole record – it comes out to great effect especially on the vocal harmonies between Potrykus and the deadpan cool of bassist and vocalist Supriya Gunda.

Drummer Andy Sadoway has his Yellow Submarine moment on “Leave It Til You Need It”, which again reminds one of the songwriting democracy of (post-)punk’s yesteryears.  Remember all those Sebadoh albums with the Lowenstein and Gaffney moments?  When the stars were in the right alignment you could convince yourself that the non-Lou songs were your favorite parts of the album.  Hard to say whether that was true or not, but divvying up the songwriting vocals, a-la Sonic Youth (though we’re still waiting, I think, for the long-promised Steve Shelley lead vocal – or did that happen?), is always a great tonic to zeroing out on creativity in favor of phoning in one sound, one approach, one schtick.  Feels Weird gives off a more organic vibe as a result, knotting together all the musical nods (a little Johnny Rotten turn on “Brat Poison”?) into one pretty little friendship bracelet for Boston, or, you know, whoever wants to be friends.

Panda Riot – “Amanda In the Clouds”