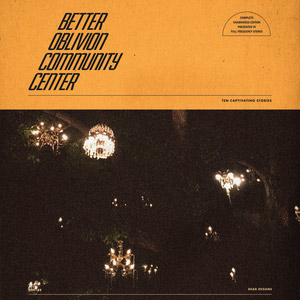 The softer side of indie, more country/folk, has had lots of great voices break out, but then soon get lost in the din as other great voices break out. It’s hard when you’re no longer the new kid on the block. Conor Oberst broke out over a decade ago as Bright Eyes, yet has managed to stay relevant, often by changing up his style (such as on-again, off-again use of his Bright Eyes name, or going country with his Mystic Valley Band) or working with others (like Monsters of Folk supergroup). Phoebe Bridgers only broke out in 2017 with the acclaimed Stranger In the Alps, but that’s enough time to be passed by. She’s already teamed up with fellow songstresses Julien Baker and Lucy Dacus as boygenius; now she & Oberst come together very well as Better Oblivion Community Center.

Often team-ups can feel less than the sum of their parts, or just the sum, trading off doing a song like one member, then a song like the other. But Bridgers & Oberst’s voices harmonize effectively on BOCC pieces such as opener “Didn’t Know What I Was In For” or the great wry country-rock “Dylan Thomas”. Yes, there are moments where one hears the intimate Bright Eyes of old, such as “Service Road”, but they don’t come off as outliers. Meanwhile, the pair can play off each other in sweet duets, like the tumbledown relationship “Sleepwalkin’”.

Established musicians teaming up to form a new band can often feel unnecessary, a side-project that’s nice enough, but you know won’t exist past an album cycle and will be a footnote in their careers. But Better Oblivion Community Center actually feels worthwhile in its own right.