Biffy Clyro are also one of the most talented bands in recent history at being able to convey that live passion on their studio albums.... 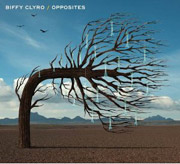 Scotland’s Biffy Clyro are a hardworking bunch of guys and it doesn’t take long to notice it, especially if you take a look at any of their live footage.  They are also one of the most talented bands in recent history at being able to convey that live passion on their studio albums and their latest effort, the double disc Opposites is absolutely no exception.  Shortly into the blistering opener “Different People”, it is clear to see that you’re in for a wild and passionate ride.

Comprised of only three members, Biffy Clyro deserve to be ranked among some of the top power trios.  There are still a decent amount of people in the United States who have yet to hear them, but that is not to say that they don’t still have an extremely dedicated American following.

Any group who can sell out Wembley Stadium in London is worth looking into.  Many would call them seasoned veterans by this point, having released five albums (not including Opposites, which releases in the United States in March).  They present a variety of rock that is unconventional and at times downright different.  They employ odd time signatures, atypical chord progressions, as well as interesting (to say the least) lyrical content.  To put it quite simply, their music is catchy without seeming too mainstream.

Click here for photos of Biffy Clyro at Music Hall of Williamsburg in Brooklyn, NY on October 9th, 2013 in the QRO Concert Photo Gallery

Click here for photos of Biffy Clyro at Manchester Arena in Manchester, U.K. on March 25th, 2013 in the QRO Concert Photo Gallery

As previously mentioned, “Different People” is the perfect way to open this album up.  It starts off rather quiet and around the 2:20 mark the crunchy guitars and heavy drums that these guys are so well known for kick in.  Another standout song is “Sounds Like Balloons” with its oddly sentimental and hopeful feel.  Biffy Clyro are well known for anthemistic songs and this one fits right into that mold.  A third track worth taking a deeper look at is “Stingin’ Belle”.  This song is a prime example of Biffy Clyro’s low-end crunchy guitars and complex rhythms.  The great part of this piece comes in the second half when it just keeps building with the bagpipes in the background.

As far as comparison between Opposites and Biffy Clyro’s previous albums go, their evolution is fairly standard.  Their older albums like 2003’s The Vertigo of Bliss sound a lot more under-produced in the guitar and drum sounds.  There are even some songs that sound a little more screamo, believe it or not, such as the song “Bodies In Flight”.  They began the transition to what they are now with 2007’s Puzzle and that sound continued on 2009’s superb Only Revolutions.

Overall, Opposites is a solid rock album and an equally solid entry into the Biffy Clyro catalogue.  Some dedicated fans might not consider it their best album to date, but they have proven time and again that they aren’t willing to settle for mediocrity.