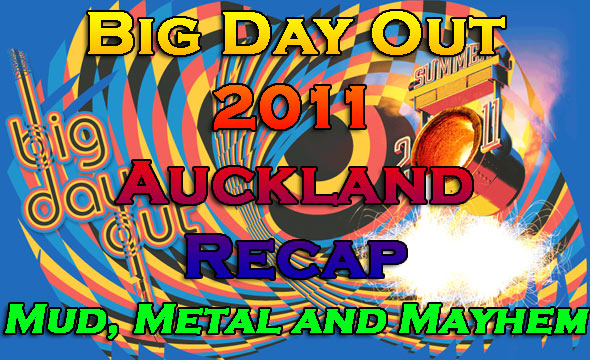 Big Day Out: has there ever been a more aptly named event?  Over 50 internationally acclaimed bands were stuffed into the 13-hour day on Friday, January 21st at Auckland’s Mt. Smart Stadium, which meant a lot of running back and forth, a lot of sweat soaked clothes and a hell of a lot of good music.  While the theme of Big Day Out 2011 was vague and undefined, the overall aesthetic was an all-encompassing time warp; an all-inclusive blast from the past that featured headliners whose median age was almost half-a-century.

The crowd reflected the metal-heavy lineup – long hair, black shirts, baggy jeans, beards and bandanas – the demography of the event was far less diverse than years before.  There was a heavy dosage of nostalgia in the air as Shihad and Primal Scream played their seminal ‘90s albums in their entirety (The General Electric and Screamadelica – in respective order).  Iggy and his gang of Stooges churned out their signature raw ‘70s anthems, and German nü-metallers Rammstein took us back to a time when overt-pyrotechnics and Third Reich-inspired stage antics were taken seriously.  So all those punters who complained that Björk, Neil Young, Arcade Fire and My Chemical Romance had ‘softened’ the BDO atmosphere were surely overjoyed with the intense and shocking performances. 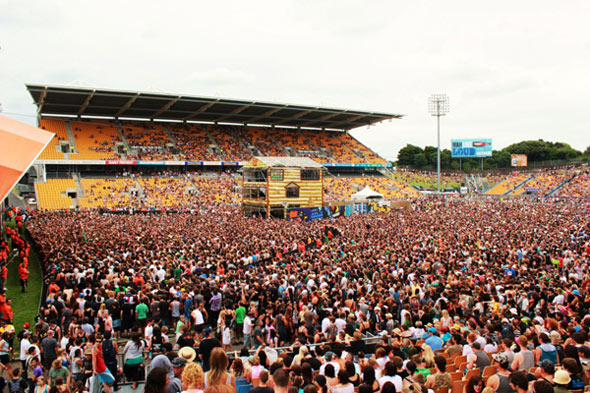 Click here for photos of Bang Bang Eche at CMJ 2009 in New York, NY in the QRO Concert Photo Gallery

Click here for photos of Ratatat at 2009 Fun Fun Fun Fest in Austin, TX in the QRO Concert Photo Gallery

Click here for QRO’s review of Ratatat at Middle East in Boston, MA on September 6th, 2006 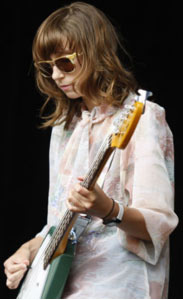 Local talent Kids of 88, Die! Die! Die! and Bang Bang Eche played early on, and all of them well earned their place up on the stage.  Auckland-based Steriogram seemed dwarfed on the main stage, but still satisfied the crowd with their unique blend of fast-paced vocals and fervent guitar riffs. 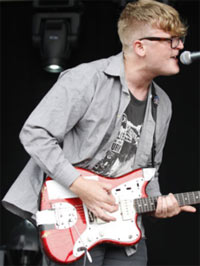 The new and improved (no sides this year) Boiler Room was the place to be if you wanted to catch some of the more current and relevant names in music – plus if you wanted to escape the drizzling and relentless rain that plagued the second half of the day.  Ratatat played one of the day’s best sets, and their psychedelic instrumental dance sound was perfect for the Boiler Room atmosphere.  Then Brazilian imports CSS got a little rowdy with lead singer and femme fatale, Lovefoxx, stripping down to hot pants and a cut-off top.  CSS delivered the most exotic set of the day, and their Portuguese roots did not go unappreciated. 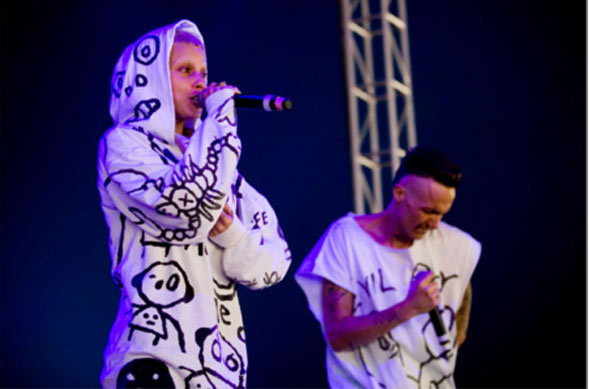 Click here for photos of Die Antwoord at 2010 Creator’s Project in New York, NY in the QRO Concert Photo Gallery

Then came South African freak-pop trio, Die Antwoord (translated from Afrikaans as “The Answer”).  If Die Antwoord is a joke, they’re an expertly planned one.  Their fanbase ranked among one of the biggest at Big Day Out and Google Analytics places them higher up in rank of interest than Justin Bieber.  Who knew?  What allegedly started as a “conceptual art-rap project” has turned into an Internet phenomenon, and placed Die Antwoord on the lips of millions across the world.  The hulk-ish mute that is DJ Hi-Tek was the first member to saunter out on stage, complete in ogre mask and executioner’s garb.  Then little Yolandi Vi$$er (yes that’s Vi$$er with a $$) the screechy siren ran out in a self-decorated onesie, resembling a toddler on crack.  Leader and gloriously-mulleted Ninja later emerged, in his now-iconic Pink Floyd boxers and revealed a torso covered in amateur tattoos.  Their set was fast-paced, vulgar and extremely fun.  And when Yolandi stripped down to gold spandex, the crowd lost control (a guy in front of me got punched in the face, but continued dancing despite a broken nose).  Yes, this was one for the ages.

Crystal Castles then delivered a somewhat disappointing set, but kept the energy up with a crass selection of digital hardcore.  Most of the disappointment stemmed from lead singer Alice Glass’ broken ankle, that prohibited her from displaying her wild stage antics – though she did chug half a bottle of whiskey before breaking into the riotous “Crimewave”.  But I salute her for performing, crutches and all.  Unlike the Black Keys who were far too “exhausted” to honour their commitment.

By that point I had been in the Boiler Room for nearly six hours, and my stomach was completely empty, so I had to make the difficult decision to abandon my excellent position at the front of the mosh, brave the drizzle and seek sustenance.  Which meant I had to experience, upon my return to the tent, Mt. Eden Dubstep and the Bloody Beetroots from the back of the full-to-capacity Boiler Room.  Still, both played excellent sets.

Then there was a rain-dampened blur between The Naked and The Famous‘ surprisingly euphoric “Young Blood,” Edward Sharpe‘s ‘60s-inspired feel-good jams and Shihad‘s tight, consistent yet luster-lacking NZ anthems on the main stage. 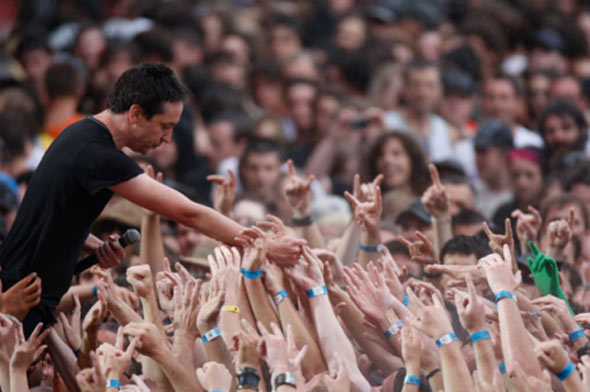 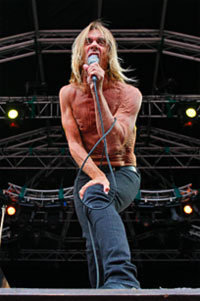 And then Iggy Pop appeared shirtless for the third time at Big Day Out (he was on the BDO bill in 1993 and 2007).  The sound was sludgy, the crowd tried in vain to escape the rain, but ol’ Iggy was as charismatic and crazy as ever.  The guy practically invented the wild frontman shtick, and his experience showed.

German industrial-metallists Rammstein provided the most exciting, albeit clichéd show of the night, that included burning their lead singer in a vat, WWII-esque pyrotechnics, and a Nazi goose-step routine that probably offended.  But damn it was fun to watch.

Click here for photos of LCD Soundsystem at 2010 Pitchfork Music Festival in Chicago, IL in the QRO Concert Photo Gallery

On their last tour ever, LCD Soundsystem had the bad luck to be scheduled at the same time as Scottish-legends Primal Scream, which meant their crowd was significantly smaller than it should have been.  I chose passionate crooning over Screamadelica and thus missed out on Primal Scream’s acid-house sounds.  I was rewarded with a beautiful set from James Murphy with highlights being the epic resonance of “Dance Yrself Clean,” the reckless abandon of “Drunk Girls” and the stunningly poignant finale of “All My Friends”.  If this truly was the band’s last tour ever, they certainly went out on a good note.

Then there was Tool; the band everyone seemed to be waiting for.  The mysterious metal act headlined BDO 2007 and promised they would return “soon.”  Though it took them four years to keep that promise, Tool seemed right on form, and played an explosive set of industrial prog-rock.  The lights, the lasers, the smoke – it all added up to one amazing performance. 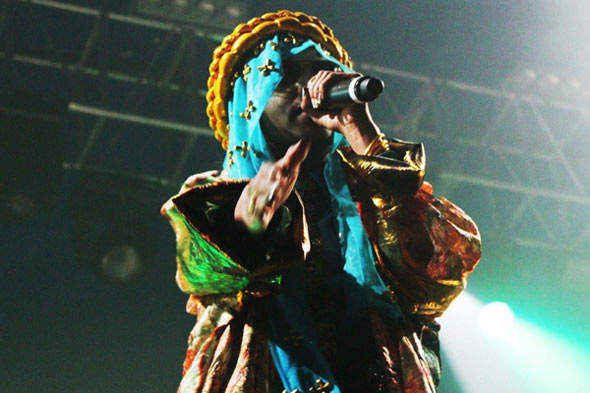 Click here for photos of M.I.A. at 2010 HARD NYC on Governors Island in the QRO Concert Photo Gallery

Click here for photos of M.I.A. at 2010 Creator’s Project in New York, NY in the QRO Concert Photo Gallery

Click here for photos of M.I.A. at 2007 Siren Music Festival on Coney Island in Brooklyn, NY in the QRO Concert Photo Gallery

Those who could still stand after Tool had a tough decision to make: Sri-Lankan futuristic diva M.I.A., or Nick Cave’s Grinderman.  Because of the rain, and the fact Mr. Cave was playing to an un-covered area, I chose M.I.A. and by god it was the best choice I made all day.  Her live show was worthy of an Oscar for lighting and stage direction, and her well-crafted arrangements sounded even better live than they did on the album.  M.I.A. had the crowd eating out of the palm of her hand, 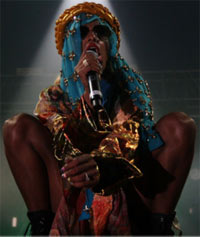 and strutted about the stage in complete control.  The obvious choice for an encore, “Paper Planes”, was met with berserk and uncontrolled fits of exuberance from the crowd.  It was the perfect end to a day that was not flawless, but perfectly flawed.  Bring on Big Day Out 2012!