'Bill & Ted Face the Music' is the laid-back fun we so desperately need right now.... 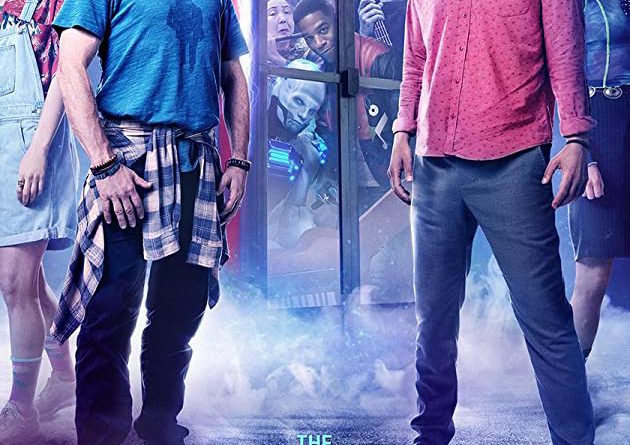 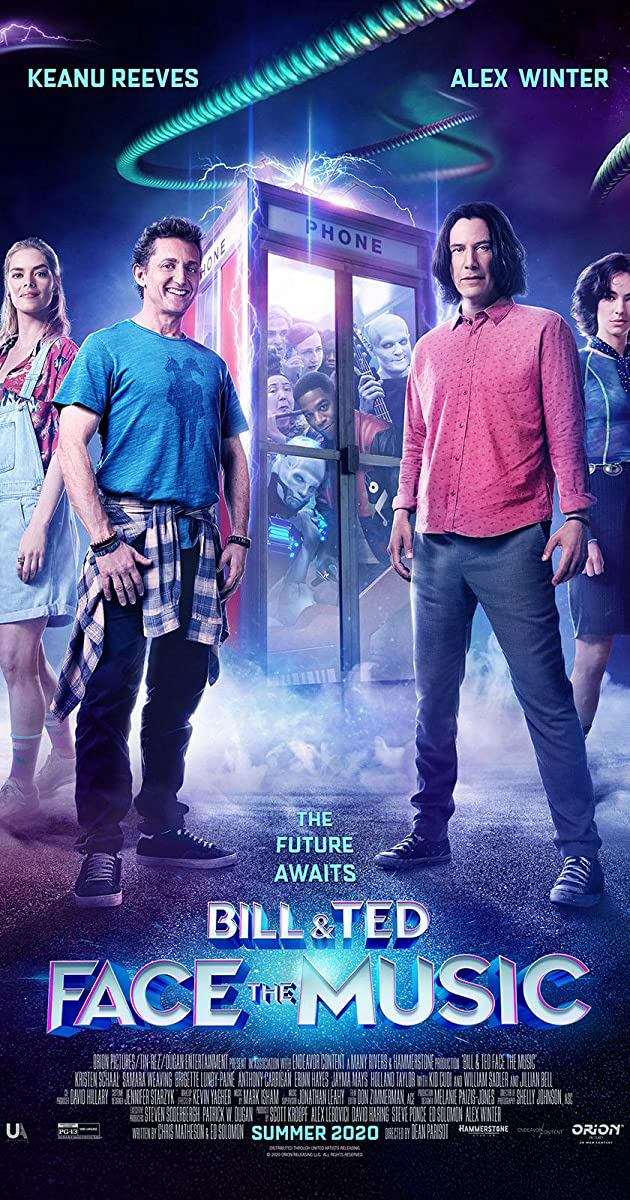 Way back when George H. W. Bush was President, America & the world were introduced to Bill S. Preston, Esq., and Ted ‘Theodore’ Logan, a.k.a. Bill & Ted.  Bill & Ted’s Excellent Adventure was a goofy, hilarious, and thoroughly enjoyable Adventure as two amiable if unintelligent slackers (Alex Winter & Keanu Reeves) romped through time in order to save their band Wyld Stallyns, and, according to mentor-from-the-future Rufus (George Carlin), the world.  Two years later, follow-up Bill & Ted’s Bogus Journey featured a good-if-not-as-good journey through heaven & hell, highlighted by challenging, then recruiting, none other than Death himself (William Sadler), culminating in a big finish.

And then Bill & Ted seemed to be put to bed, as Reeves went on to become one of the biggest movie stars in the world, Winter more than just ‘the other guy’ but indeed directing acclaimed indie features, and seminal stand-up comedian Carlin passed away in 2008.  But the twenty-first century is nothing if not about reunions & revivals, so Preston & Logan got the band back together, including original writers Chris Matheson & Ed Solomon, for Bill & Ted Face the Music.  And while far from a perfect movie, Face the Music is the laid-back fun we so desperately need right now.

Long-awaited, long-delayed sequels are a tall order.  Think the revival of The X-Files.  Think of the sequel to Independence Day.  Think of the sequel to Dumb & Dumber.  The years made the original product(s) shine through rose-colored glasses, even as their references grew dated and their stars aged.  Do the exact same thing as before, and you’re nothing but a retread cash-in.  Do something completely new, and you’re betraying the franchise and its loyal fans.  Try to mix the old & the new and you’re messing with success.  Yet Face the Music threads the needle.

Well into their fifties but not any smarter, Bill & Ted are still married to the fifteenth-century princesses they met in the first movies (albeit recast with the don’t-even-look-in-their-forties Erinn Hayes & Jemma Mays), parents to the millennial daughters Theadora “Thea” Preston and Wilhelmina “Billie” Logan (Samara Weaving & Brigette Lundy-Paine), but have not written the song that’s going to save the world – indeed, the success they had in the end credits of Bogus Journey has dwindled to nothing, yet Bill & Ted keep trying.  Their only supporters are their equally as musically obsessed – and equally as otherwise clueless – daughters.  Just when Bill & Ted are thinking of hanging up their mission, Rufus’ own daughter Kelly (Kristen Schaal, the series recruiting another great stand-up comedian) comes to see them, and in the future the duo find out that they have to write the greatest song in the world in the next seventy-six minutes, or reality will unravel.  So, the boys travel forward in time to try to steal the song from themselves, while their daughters later decide to travel back in time to recruit an all-star line-up of musicians to back up their fathers.  Hijinks ensue.

One has to be willing to go along with this movie in order to like it, but if you do, you will love it.  Yes, the time travel makes no sense even for a time travel movie (Tenet, this is not).  Yes, Weaving & Lundy-Paine play millennial versions of the Bill & Ted characters, clearly trying to draw in a new generation of Bill & Ted fans.  Yes, pop culture references from the first two have gone out of fashion, from Bill & Ted’s love of hard rock to the phonebooth used as the original time machine (here displayed as a memorial to the late Rufus/Carlin, but still used by Bill & Ted).  And at just ninety-one minutes, the movie is overstuffed, with some plots like the wives’ problems in their marriages being underdone, plus the film just goes so fast that you’ll hopefully overlook the plot holes.

But this is a franchise that has earned all of its goodwill, and uses it to great effect.  Bill & Ted have not changed, but the world around them has.  The story takes the ideas of the originals, but does different things with them, like having it be their daughters who travel back in time to meet famous musicians, or Bill & Ted meet themselves in the future, but their future selves are jerks (with great over-the-top make-up).  The joyful spirit of the first movie, which did get a lost a bit in parts of the second, stays true.  Not just Bill & Ted but other greats from the originals return, including Hal Landon Jr. as Ted’s still-disappointed police captain father and Sadler as the Grim Reaper (stealing every scene he’s in, just as in Bogus Journey), plus great additions like Schaal and even Kid Cudi as himself, though a Kid Cudi who understands the quantum mechanics behind time travel.  There’s also much better representation in a movie built around two white guys from the first Bush administration.  You’ll probably figure out the big surprise at the end long before it is revealed, but it’s still great watching the pair finally get there themselves.

Also, Face the Music is about the music, more so than either of the first two movies.  That goes from bringing in great musicians of the past to the stacked soundtrack, but particularly with the daughters’ love of music.  As much as Bill & Ted had professed their desire to rock, both Excellent Adventure and Bogus Journey saw Wyld Stallyns, and their music in general, as more of a MacGuffin than something of its own.  Here, how music can bring people together, across time & space & generations, is the wonderful point of Face the Music.

[note: it’s also why a music publication is reviewing this movie]

One could say that this is the worst time to release a long-awaited movie, the COVID epidemic forcing Face the Music to play in only select theatres and on-demand.  But this might actually be the best time for Face the Music, when we all need something to bring us together during the multiple crises that we’re all facing.  We need something amiable and purely enjoyable, as upbeat as a cat video and uniting as a catchy song.  We need Bill & Ted to tell us, to remind us, to “Party On,” and “Be Excellent To One Another.”