<img src="http://www.qromag.com/wp-content/uploads/2010/09/theblackangelsphosphene.jpg" alt=" " />By resisting the urge to charge head first into their stock psychedelic and cut down the excess, the Black Angels have broadened their scope of... 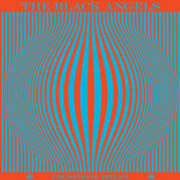 It’s hard for an artist to let go.

Cutting a sentence out of a thoughtfully formed paragraph is akin to stabbing a writer.  Telling a painter that his color pallet is off is like challenging his life’s philosophies.  Their creations are extensions of themselves, and therefore harder to identify and edit out flaws.

Austin psychedelic quintet the Black Angels is no exception to this plight.  Influenced by the likes of Pink Floyd, Roky Erickson (QRO album review), and the Velvet Underground (who penned the song that inspired their name), the band has a tendency for rambling guitar-driven songs that seem to drift toward the sky.  Their talent is evident, but the Angels have previously seemed to lack the focus to control their own large sound.  Luckily, their third studio album Phosphene Dream shows a unique kind of maturity and realization about their compositions.  The album features 10 trimmed, capable songs that can jam along epically without being pushy.

The first notable difference is a newfound lightness.  While they still have a weight and crunch that the Black Angels have become renowned for, the songs have a new bounce that counteracts their traditionally dark jams flawlessly.  Opener “Bad Vibrations” calls on their old psych-freak-out ways, a steady bass bumping along with a floating guitar threading through the notes, ending in an impromptu hastened hammering on the guitar – all the makings of a typical Black Angels opener.  The majority of Phosphene Dreams features songs that dabble more in the ‘60s ambience rather than their mentor, and fellow Austinite, Roky Erickson’s ominous brand of psychedelic rock.  Songs like “Yellow Elevator #2” and the Middle Eastern-inspired “True Believers” have a touch of Sergeant Pepper‘s era Beatles, often times heavily watered down by pop overtones, and in the next instant back in a thick haze.  The bouncy “Telephone” is a powerhouse of a single that commands attention at the first listen.  The guitar and keyboard flurry combine in a sing-a-long, danceable way that is by far the most accessible of any Black Angel’s song.

By resisting the urge to charge head first into their stock psychedelic and cut down the excess, the Black Angels have broadened their scope of influence.  Phosphene Dream is provocative without being melodramatic, and stays on level easier for the common ear to process.