<img src="http://www.qromag.com/wp-content/uploads/2011/03/blackhelicopterdontfuck.jpg" alt="Black Helicopter : Don't Fuck With The Apocalypse" /><span style="font-weight: normal"><i>Don't Fuck With </i></span>is the most satisfying in the small moments of truth and transcendence, which... 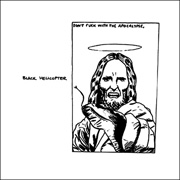 If you’re a music fan that digs the back-story, Black Helicopter have it in spades.  The Boston-based rock group is full of vets that have ties all over the indie map, from their current label Ecstatic Peace to previous records (in previous bands) released by the legendary Sub Pop.  With experience stretching back to indie rock’s golden age (The ‘90s!  Duh!  Winning!), you’d think Black Helicopter would have this crazy little thing we call the "industry" figured out.  Far from it.  The release of Don’t Fuck With The Apocalypse was beset with album art and explicit language issues of Spinal Tap proportions.  Check here for the grisly details, QRO is just going to talk about the music.

And there’s plenty to talk about.  Don’t let the punk rock bluster of "King Shit", "Idiot Son" and "Under the Bus" fool you – Black Helicopter are old school storytellers.  The chugging guitars and vintage rock percussion form a Bad Religion (QRO photos) backdrop for emotionally understated narratives of lessons learned on the long, strange trip from yesteryear to the present day.  Black Helicopter has a special talent for teasing poetry out of the mundane in true DIY fashion.  The track "Pickle Jar" recounts a crushingly banal episode in a quotidian existence with no redeeming punch line or surprise twist.  In short, a man walks into a video store; rents the same video he always rents; then walks into a convenience store of some sort; buys the same jar of pickles he always buys; walks home, and watches the video in slow-motion (while munching on his pickles, presumably).  FIN.  Black Helicopter mix equal parts humility and pride into a style of songwriting that isn’t afraid to tell the story of the average Joe, and to raise it to the level of art, whether the story is about a TV party, dirty boots, or whatever (nevermind).

The track "Class Action" touches on more explicit political themes.  The protagonist comes home one day to find a legal notice posted on his door, drawing him unexpectedly into a narrative that chews up him up in a Kafka-esque machinery of (in)justice.  Black Helicopter touch on large themes, but always through the intimate lens of the individual, a perspective that remains aware the larger picture of the world will always be out of its reach.  That leads to a brooding mood of suspicion in "Class Action", or the average absurdity of "Idiot Son".

Sometimes, though, the sense of futility achieves a kind of transcendence unavailable to younger, angrier punk rock.  The "American Idiot" may be a dupe of the system, but no matter how much he is victimized, lied to, mistreated, ridiculed, belittled by a society that can’t steer straight, the "idiot" still exercises a freedom of the pleasures and pains that make up his life, and can’t be appropriated by another.  The track "Record Player" has a sweet Pavement (QRO live review)-like lilt, and rings true with a story about the simple pleasures of good tunes that make for good times.  Don’t Fuck With The Apocalypse is the most satisfying in these small moments of truth and transcendence, which Black Helicopter handle with the deftness of touch belonging to veterans of the game.