Black Joe Lewis & The Honeybears : Tell ‘Em What Your Name Is 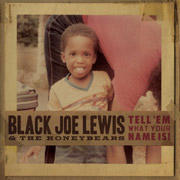 Austin, Texas has always batted above its weight in music, combining the stylings of the Deep South, Wild West, Rio Grande, and college town (it’s the home of the University of Texas, one of the largest schools in America), to the point where it claimed for itself the title of ‘Live Music Capitol of the World’ and no one objected (though, as Howard Stern said when he claimed for himself the title ‘King of All Media’, no one ever objects to these kinds of claims, citing the reaction to Michael Jackson ennobling himself ‘The King of Pop’).  The confluence of country/western & college has proved fertile ground, with everything from the big South-by-Southwest music industry conference (QRO recap), other music festivals like Fun Fun Fun Fest (QRO recap), PBS’s Austin City Limits program (QRO Indie on Late Night TV listings) – which has its own festival (QRO Festival Guide) – and more, up to and including a statue of the town’s late, lamented local hero, guitarist extraordinaire Stevie Ray Vaughn, whose death in 1990 shut down the city like no one’s since Elvis.  In more recent terms, the Lone Star State capitol has given birth to such diverse acts as the alt-country of Okkervil River (QRO live review), the post-rock of Octopus Project (QRO photos in Austin), the indie-rock of Spoon (QRO live review), and the latin rhythms of Grupo Fantasma (QRO photos in Austin).  And now come Black Joe Lewis & The Honeybears, whose blues-funk is fun, but ultimately nowhere as original as the town of Austin.

Click here for photos of Black Joe Lewis & The Honeybears at 2021 Sea.Hear.Now in Asbury Park, NJ in the QRO Concert Photo Gallery

Click here for photos of Black Joe Lewis & The Honeybears at The Independent in San Francisco, CA on April 4th, 2017 in the QRO Concert Photo Gallery

Click here for photos of Black Joe Lewis & The Honeybears at SXSW 2017 in Austin, TX in the QRO Concert Photo Gallery

The eight-piece outfit built their reputation on an electric live show, as well as the winning frontman personality of Lewis, but those two facets struggle to make themselves really stand out on the band’s debut, Tell ‘Em What Your Name Is.  The garage-soul that cuts through Tell ‘Em is undoubtedly upbeat and boogie-riffic (though did they really need to call a track “Boogie”?), but, in the end, largely a James Brown clone, coming from a younger man lumped into a new genre.  Most of the songs on Tell ‘Em are variations on the blues-funk jam, varying only in how much the horn section livens them up, with Lewis’ vocals providing little but a refrain.

There are a few places where Lewis’ voice gets more into the mix, but “I’m Broke” only heightens the comparisons with the (once-and-always) ‘Hardest Working Man in Show Business’ (no one ever challenged Brown when he claimed that title, either…).  “Get Yo Shit” is inspired, however, with Lewis really coming into his own as a wry blues-man, telling an awfully funny story about getting his girl to take him back after throwing his stuff out on the lawn, and ending with a visit from the awfully-nice Austin PD.  So clear is it a stand out that one wonders how they could have made the record and not known that people would want more of this; it wouldn’t have to be all “Shit” (which would lose its touch by that point), but the percentage should have been higher than ten.

Austin’s diverse music scene doesn’t stop the various actors from working with each other, like Grupo Fantasma providing horns for Spoon on 2007’s Ga Ga Ga Ga Ga (QRO review), and Lewis has certainly been supported by the locals: Spoon’s Jim Eno produced Tell ‘Em What Your Name Is, and Lewis & The Honeybears toured with Spoon & Okkervil River, not to mention being featured at Fun Fun Fun Fest 2008 (alongside Octopus Project, Grupo Fantasma, & other natives) and seemingly everywhere at SXSW 2009 (even Austin alt-folk singer/songwriter Brian Birdwell – QRO album review – dropped a line to QRO, touting Lewis).  Hopefully the ensemble can build and truly earn this good will in the future, with a more original take on their fun, rare, retread.