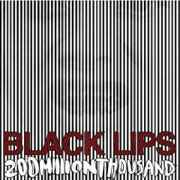 Atlanta’s Black Lips have become known the world over for their wild stage shows, including vomiting, urinating, band members kissing, and even a live chicken (QRO photo) – just last month, they had to flee India, in fear of being arrested for ‘promoting homosexuality’ (who knew the country that gave us the Karma Sutra could be so uptight?…).  The flipside to that is that their actual music gets less attention, and the lack of polish or reinvention to their fifties garage-rock means that their latest, 200 Million Thousand, won’t change that.

Black Lips have always trafficked in lo-fi sounds, borrowing their musical style (if not their stage actions) from the Eisenhower era.  But after the heightened success of 2007’s Good Bad Not Evil and its stand out single “O Katrina!”, the band seems to have just repeated themselves on 200 Million, lacking attention and focus.  That first comes out in the track list: at fifteen (including a hidden track), the record clearly could have used some greater culling.  The back half is especially weak, maybe because it’s just the same as the first side, replaying the sadder strains of “Starting Over” on “Old Man”, or the dirty-blues of “Let It Grow” with “BBJOT” and the hidden track.  But the band also further abandons melody for the staccato “Body Combat”, near-pseudo-rap “Again & Again”, and trying to tell a story like a live Bruce Springsteen (QRO album review) on “I Saw God”.

Actually, “Again” isn’t embarrassing, but it’s “God” that’s really leaden, thanks to the band’s unfortunate tendency towards over-lo-fi.  On “God”, that particularly stands out – it’s difficult to tell what story is being told, too lo-fi and not enough volume (except when singer/guitarist Cole Alexander swears and a loud “beep” is inserted over everything…), but even on the rest of 200 Million, the tendency keeps the tracks similar and forgettable.  Better is when the band actually tries, such as on the catchy garage-swing openers “Take My Heart” and “Drugs”, or especially with single “Short Fuse”.  On “Fuse”, Black Lips are compelling and interesting, harkening back to the proto-sixties country-garage whose skill laid the groundwork for the following decade – but, almost ironically, the band decides that this is the moment to add on a little more, now unnecessarily.

Black Lips claim most recently to have mellowed, even matured a bit, and only their live show can attest to whether that’s true.  But if they have, that’s too bad.  Not just because it will disappoint their fanatical fans, but also because the band hasn’t matched that maturity with sonic growth.  While in performance, the band might be unmistakable, on record, Black Lips are pleasant, but unremarkable.