Outdoors in daytime, electronica often struggles.  The sounds are made for nightclubs and light shows.  The band – if there is a band – is usually stuck behind computers or keyboards or Korgs or whatnot.  They’re also not well versed in stage banter.  But Black Moth Super Rainbow beat that at South Street Seaport (QRO venue review) on Friday, July 24th, as part of downtown New York’s River-to-River Festival, by bringing out some serious humor, most notably in a guy dressed in a monkey suit & kabuki mask. 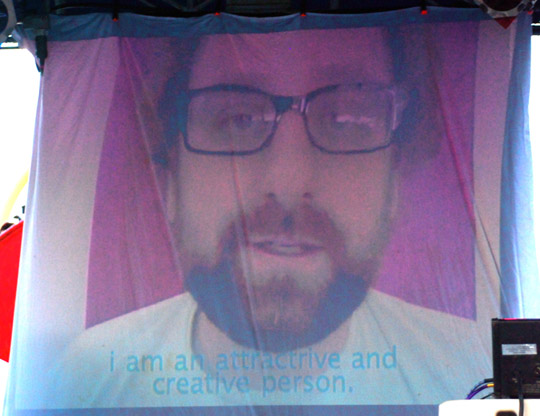 Before the band even took the stage, the projection screen behind them pseudo-lit up (it was rather hard to see in the light of the early summer evening) with some guy talking about music.  You could be forgiven for thinking it was the leader of the band, Tobacco, until the person on the screen started talking about the ‘bad bands’, “Like this band Black Super Rainbow or something…”  He bitched about seeing them – likely last year at McCarren Park Pool (QRO venue review) – opening for MGMT (QRO photos of MGMT from then), and went on about their stupid name, stupid robot-sound, and “douchebag fans” (note: if at McCarren, this was a free show he was bitching about…).  The packed, relatively young Seaport crowd mock-cheered, and were then met on screen by the large face of Eric Wareheim of Tim & Eric Awesome Show, Great Job! (QRO photos – and of the late, superior Tom Goes To the Mayor, both on Adult Swim), who told the crowd that they weren’t douchebags, and even got them to repeat a self-affirmation (but did criticize BMSR’s name, saying they should change it to just “The Black Rainbows – now that’s marketing!”).  Even if you couldn’t make out the faces on screen, it was a great way to kick things off. 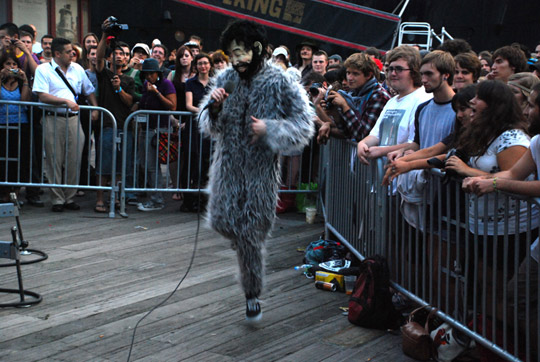 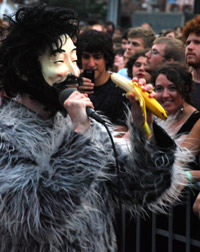 But the band took that up a notch when they actually took the stage, thanks to the man in the monkey suit & kabuki mask.  Pretending to sing (while actual singer Tobacco was sitting on the floor of the stage, playing some equipment, behind the monitors), this masked man quickly did much more.  He pulled out chips, and strawberries, and bananas from the Axis & Allies board game box he brought with him on stage, often feeding them to the crowd.  He not only danced in the large photo pit (making the photographers have to dodge him & his mike cord), but also even wandered into the extended, cordoned-off VIP area to the 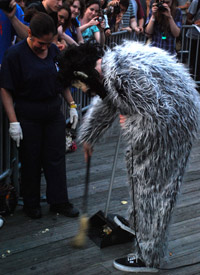 house-left (mike cord in tow – he never dropped the pretense that he was singing, despite it’s obvious falsehood and all the difficulties that having the cord dragging behind him brought; even security & staff straight-faced obliged).  He hugged fans & mugged for the cameras.  And, at his best moment, when one of Seaport’s cleaning crew came into the photo pit to sweep up all the chips he dumped out, this masked man took it upon himself to clean up the mess he’d made.  He wasn’t an expert at it (guess he’d never done community service…), but kept at it.  The cleaning staff-woman was obviously quite bemused, but the masked man made sure everyone cheered for her, and that all the photogs took her photo as well. 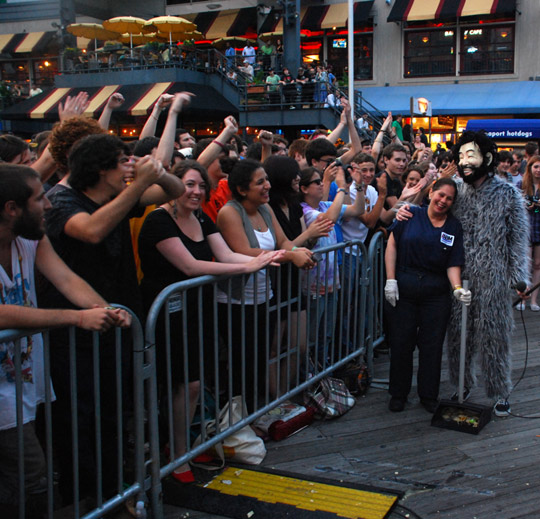 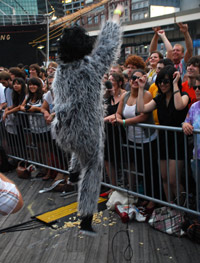 When Black Moth Super Rainbow opened for MGMT last year at McCarren (QRO photos of BMSR from then), it admittedly wasn’t a great show.  Part of that was due to the crush of people there for MGMT, and the over-worked, under-staffed crew (it was a packed house, despite early rain, and word is celebrities like Kirsten Dunst were backstage, so some of the staff might stayed home, and others might have been backstage, trying to hobnob).  But BMSR also didn’t know quite how to present themselves on stage – Tobacco wore one of the close clear, serial killer masks, and was stuck behind his equipment.  Headlining this year at Seaport, they most definitely upped their game.  And while it was tough to make out what any song was, outside of opener “Born On a Day the Sun Didn’t Rise” (opener of their latest, Eating Us – QRO review), and the masked monkey-man did run out of stuff to do by the end, it was far more memorable than electronica usually is, outside in the light. 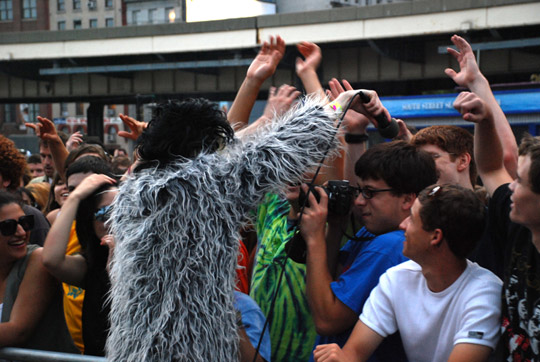