<img src="http://www.qromag.com/wp-content/uploads/2010/04/brmcbeatthedevilstattoo.jpg" alt=" " />F<span style="font-style: normal">or the moment, Black Rebel Motorcycle Club is what it is: a likeable band that reminds you of the bands that you... 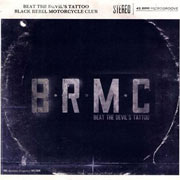 Black Rebel Motorcycle Club has always been a good band, never a great one.  It takes a little something extra to get to that next level: virtuosity, originality, dumb luck.  For whatever reason, BRMC haven’t yet come out of the long shadow cast by influences like the Verve, Jesus & Mary Chain, INXS.  But rock and roll is, among other things, a war of attrition.  As their heavyweight influences die off or go defunct, they begin to find themselves as the last band standing.  To a younger audience that’s never heard Psychocandy or Darklands, the latest BRMC release, Beat the Devil’s Tattoo, must be a revelation.  Yes, the sound is a bit dated, but revved-up blues licks and bad attitudes don’t ever go out of style.

Opener “Beat the Devil’s Tattoo” is good ol’ foot-stomping, Beck-style blooz junk (circa late ‘90s – QRO re-release review) with live drums instead of a beat box.  After more than ten years in the business, BRMC knows how to fashion a surefire single.  Big dumb refrains, handclaps, and sing-along breakdown outros.  It’s a calculated move to grab attention – and it works.  Like seasoned pros, BRMC shapes the listener’s experience.  Grab their attention with the opener; get their motor started with screaming arena rock numbers like “Conscience Killer” and “Bad Blood”; then throw ‘em a curveball with the dirty, devolved “War Machine” (similar in both subject matter and delivery to solo John Lennon), before striking a quieter, more reflective mood in the stripped-down folk of “Sweet Feeling” and “The Toll”; finally, go out big and leave them panting after the adrenaline anthems of “Shadow’s Keeper” and “Martyr”.  The expertly constructed arc of the album is a testament to a band that has played thousands of live gigs.  That’s a good and bad thing.  Nobody wants a haphazard collection of songs thrown together ad hoc.  On the other hand, if you’ve heard this sort of music done before by bands closer to your heart, you may just feel like you’re being toyed with.

Beat the Devil’s Tattoo is not going to grab the attention of anyone who wasn’t already a BRMC fan.  Not that there’s anything wrong with that.  Rock ‘n’ roll is a tough business, and just keeping your head above water is pretty impressive.  The new release does that and more, combining the heavy rock aspects of their earlier work with the sparer folk of Howl into a nice hour-long distillation of the history of their sound.  If the band can hold on a few more years, maybe they’ll gain that ‘elder statesmen of rock’ title that could beg a critical revaluation of their work.  But for the moment, Black Rebel Motorcycle Club is what it is: a likeable band that reminds you of the bands that you really love.