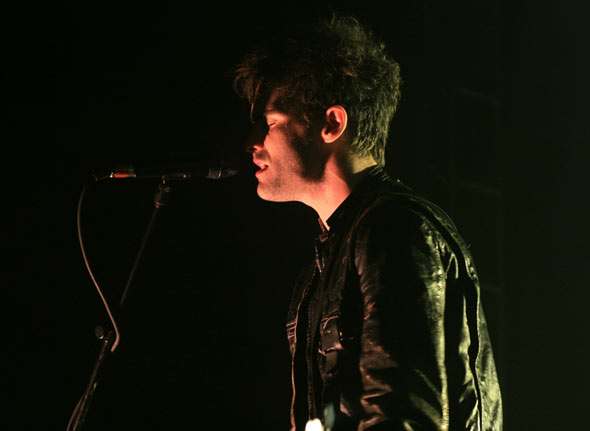 Black Rebel Motorcycle Club arrived at Bristol’s O2 Academy on Friday, December 10th to a sell-out 1,600 capacity crowd to promote their latest studio album Beat The Devil’s Tattoo (QRO review); those who arrived late struggled to find a vantage point with which to witness the pending show.  The audience had a varied contrast of both older and younger fans; such is the appeal of the band from San Francisco who continues to stick to their blend of psychedelic distorted guitar or acoustic bluesy almost gospel tracks.

The band have been resilient in their twelve-year career, touring relentlessly and releasing quality albums, but yet never quite appealing to the masses, which is probably a good thing helping BRMC to remain true to their edge and unpredictability to the trimmings that come with the music industry.

The air hung heavy with dark lighting and dense dry ice as the three members of BRMC took to the stage to an enthusiastic welcome and launched into “666 Conducer” from their 2007 album Baby 81 (QRO review), led by a black clad Peter Haynes on guitar, who was clearly bravely hobbling around after breaking a bone in his foot. [editor’s note – Later Haynes was to tell me that Jack Daniel died from blood poisoning, from the infection caused by his broken toe.  Our rocker Peter rather than insisting on immediate treatment preferred to kill the pain with some of the medicine Mr Daniel’s is famous for.  Rock ‘n’ Roll indeed!]

BRMC were forced to start their show early due to the venue converting into a nightclub on the stroke of 11am.  They moved into older territory with some older songs and popular songs, “Stop” and “Red Eyes and Tears”, which blend perfectly with the new material.  Also relatively new to the band is Leah Shapiro, who impressed through the night with her impressive powerful drumming following the departure of Nick Jago.

Well received were the next two songs from the excellent recent sixth studio album, Beat The Devil’s Tattoo, with the title track of the album bringing Been to the front of the stage aiming his guitar at the crowd like a machine gun, but rather than run the seething mass of bodies swayed closer to Been, crushing those in the front.  “Bad Blood” sounded even better live than the recorded version, it was a growing mass of sound with effects pedals being stretched and engulfed by thumping bass and drums.

BRMC were treating fans to the cream from all their albums, and their acoustic blues album Howl from 2005 was represented by the floor-stomping, hand-clapping, and acoustic strums of “Ain’t No Easy Way”.

“Mama Taught Me Better” brought crashing cymbals from Leah Shapiro, and the verses thrust with real purpose, with Robert Levon Been’s deep bass.  There’s a gritty filthy rock attitude that makes this song one of the highlights of the night; that is wide-ranging with sound and includes Been on keyboards, a stupendously, climactic riff burst and triumphant ending.  On “Weapon of Choice”, Been almost too it all a bit further when he almost looked as though he was going to launch himself into the adoring crowd.

Brief interlude and time to catch breath before deep red lighting descended upon the room to be met with a shout of “1, 2, 3, 4!” and BRMC launched into “Whatever Happened To My Rock ‘n’ Roll”, one of the bands most well known songs.  Been again took to the front of the stage and put his mike towards an audience, who pushed forward for an opportunity to join in the chorus.  Haynes remained calm and collected with his black matt of hair hanging over his face.  The previous dim red lights were now replaced by an intense bright strobe lighting performance, which hypnotised the whole standing area that was now a ‘mosh’ into a frenzy.

Peter Hayes returned to the stage on his own with his guitar and harmonica for “The Toll”.  A single yellow light shone lighting up the guitarist.  For “Promise”, Been took on piano duties whilst the other two members of the band left the stage.  Soon into the song Been stopped and groaned and said that he had “fucked it up.”  He tried to start again, but started laughing only to be joined by laughter and applause from the appreciative audience.  Been declared that, “no robots had clearly been used in making of the song.”  There was a large cheer as Been was able to carry on with the song after a few false starts, with first Shapiro and then Hayes returning to the stage.

“Awake” was met with beams of blue light pointing upwards but as the song picked up pace the beams descended down to project the beams across the stage in a beautiful hypnotising spiralling fashion, that saw Been moving more and more frantically up and down the frets of his bass guitar.  For “Conscience Killer”, Haynes spent some time with his effects pedals and box of tricks teasing the audience before with a few slamming beats from Shapiro.  The place erupted with drinks flying up in the air from the audience as they bounced up and down as one.  Been came to the front with his bass aimed at the audience again, but this time more menacing and the crowd surged forward and backwards with those at the front and getting crushed.  At the end of the song Been smiled and said, “You guys are alright, man.”

There was to be no let up in the energy now being produced by the band or the audience as BRMC went onto “6 Barrel Shotgun”, which brought even further intensity with Been yelling, “No mercy!”  The mosh that was taking place was getting more and more intense and threatened to spill over.  Clearly taken by the reaction of the crowd, Been at the end of the song announced, “You guys a fucking beautiful man,” which brought further enthusiastic responses from the Bristol audience.

BRMC left the stage.  However, a deep threatening reverb drone still filled the room from the mass of amps.  This built up further as the audience started a “B.R.M.C.” football style chant and clap.  The west coast rock ‘n’ rollers returned to the stage and struck up a familiar riff of “Spread You Love” from their debut, which automatically saw everyone in the venue bouncing up and down and singing along.  There was now a further build up of members of the audience getting on top each other’s shoulders or ‘crowd surfing’.  The security battled to try and keep onto top of the situation.  One of the young leather clad youths gave a two-fingered salute to the security that were helpless as more and more people climbed on peoples shoulders.  The mosh was further building up in aggression as various members of the audience began to push one way and the next causing the crowd to surge forward and backwards.  Been again left to announce that, “You guys are fucking insane!  And the best UK crowd we have had.”  Cue further cheers from the audience.  Been also proclaimed that this was their 999th show, which just goes to show what a hard working band BRMC are.  The beauty of this band also being that when they play the U.K., it’s not just the usual three or so cities.

BRMC reached their last song in “Shadow’s Keeper” from their latest album.  A crowd surfer was finally grabbed by a security guard and carried unceremoniously upside down waving to everyone as he departed on his way.  The song led the crowd into a whirl with Been screaming down his mike, Haynes firing notes from his guitar and Shapiro beats in time with the blinding lights as they worked at a frenetic pace.

The Bristol audience were left baying for more as BRMC again displayed why they are one of the most skilled rock ‘n’ roll bands around with the sheer energy and emotion their music produces.  The beauty of BRMC is that they always put everything into their shows, as if they were playing their first few gigs.  The latest album is again a quality offering that will ensure the band swell their following and should bring praise from music journalists.  There are not any gimmicks with this band as one fan told me after.  “The band doesn’t need to move around too much, it’s just the music that creates the wild reaction from the crowd.”

We are all still in love with BRMC. 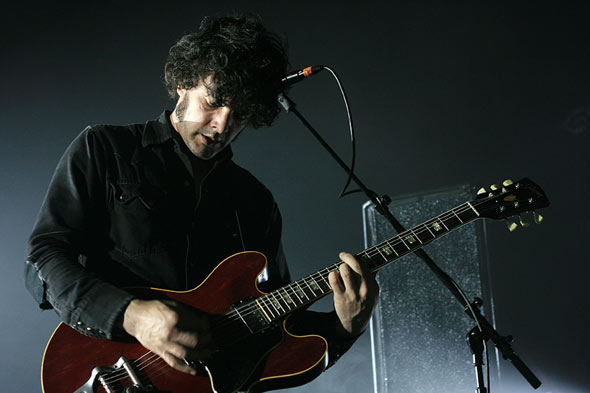 Peter Hook and The Light