It may feel strange for anyone who falls under the Generation Y banner to say "Blink 182's new album" without thinking that they've stepped into some kind of time-quake.... 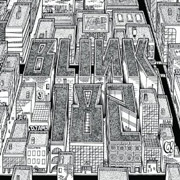 It may feel strange for anyone who falls under the Generation Y banner to say “Blink 182’s new album” without thinking that they’ve stepped into some kind of time-quake and have appeared back in their pop-punk, hate my parents, teenage days.  The three-piece fart joke band turned emo experimenters that were arguably at the top of the world in the early years of this century seemed to disappear into side project obscurity after their 2003 self-titled release.  Yet here we are with 2011’s Neighborhoods, the first offering from the trio in eight years.

The album has a strange sort of ‘recorded in a vacuum’ feel.  The songs seem to string together as if they were all done in one take with very straight-laced mixing and very little emphasis on any one of the three individual core instruments.  While this helps the punk ideal of the band’s attitude, the change-ups of tempo and genre from Blink 182 are missed.  The songs on Neighborhoods seem to have a smooth curve of emotion, with the first six songs being hyper aggressive and desperate, with the bottom six seem to come into a more elated sense of speed.  This gives the record a feeling of concept, even if the band didn’t intend it to have one.

Click here for photos of Blink-182 at 2017 Lollapalooza in Chicago, IL in the QRO Concert Photo Gallery

Click here for photos of Blink-182 at 2013 KJEE Summer Round-Up in Santa Barbara, CA in the QRO Concert Photo Gallery

Click here for photos of Blink-182 at 2013 Riot Fest in Chicago, IL in the QRO Concert Photo Gallery

Despite the punk speed and simplicity of the album, the band’s eighties new wave influences that began to show in their 2003 release shine through here.  With many ambient, Cure-influenced overdubs and interludes being very prominent, it is the record’s separation point from being simply fourteen songs of Blink 182 playing live.  While this can be pegged as the band attempting new territory, it sometimes only serves to undermine the raw sound and aggression that Neighborhoods seem to be shooting for.

All and all, the new album is a very good show of what was good, desperate, and angry about the nineties/early 2000s emo scene.  With bleeding heart lyrics, adolescent anger, and focused chaos, fans of Third Eye Blind, Alkaline Trio (QRO album review), and Brand New will enjoy the record’s energy and honesty.  Others might find it to fall a little short in the originality category, and anyone who was hoping for a return to form for Blink 182 will find themselves wanting.  In the very least, it can be said that Neighborhoods is nothing like anything else on the band’s discography.