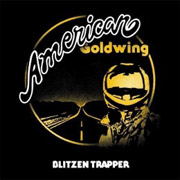 Prolific Portland-based Blitzen Trapper have been making compelling alt-country music since 2003, and as yet they’ve released albums which have beautifully amalgamated classic rock with folk, country and prog, sometimes kaleidoscopically experimenting with their influences to create a characteristic sound that has made them one of the best (but alas underrated) American indie rock bands, a worthy alternative to Wilco (QRO live review), to whom they’ve been often compared.  Their secret weapon has always been their ego-free attitude and their devotion to share music they love without any pretense.  There is something spontaneous and heartfelt about them.

Their sixth album American Goldwing is a clear departure from their more experimental, almost psychedelic phase that started with Wild Mountain Nation (QRO review) and culminated with the critically acclaimed Destroyer of the Void (QRO review) last year, and instead it strongly focuses on the band influences and their American roots.  With its slide guitars, pianos, harmonicas and banjos filled out numbers and its lyrics about good old boys trapped in a small town, it brings you back to the American southern rock of the mid-70s.  The title refers to a big Honda motorcycle that lead singer Earley’s older brother had when he was a kid and under which he once got trapped while playing with it: the American Goldwing becomes a metaphor for being trapped in the same place without having a purposeful plan for escape.

Click here for photos of Blitzen Trapper at 2013 8 Track Relay & Music Festival in Portland, OR in the QRO Concert Photo Gallery

Click here for photos of Blitzen Trapper at ACL Live at The Moody Theater in Austin, TX on July 16th, 2013 in the QRO Concert Photo Gallery

Click here for photos of Blitzen Trapper at 2013 Huichica Festival in Sonoma, CA in the QRO Concert Photo Gallery

Click here for photos of Blitzen Trapper at SXSW 2012 in Austin, TX in the QRO Concert Photo Gallery

The album opens with the scruffy “Might Find it Cheap” which is without any doubts the most reminiscent of Wild Mountain Nation, and the Lynyrd Skynyrd-esque “Fletcher”, a catchy, compassionate country anthem about a good old boy who, “Is in the car / Drinking whiskey from a jar through his teeth.”

“Love the Way You Walk Away” is definitely the most beautiful track of the record, a heartfelt tale of forgiveness and regret a-la Bob Dylan: the instrumentation is dense with weepy steel guitar, plucked banjo, harmonica and even a hint of an old FM tuner trying, “To find a station on that radio / Searchin’ hard for a song”.

The album carries on with the Big-Star-meets-glam-rock-Bowie “Young Crying Eyes”, the Neil Young-y “My Home Town” with piano and harmonica led sweet melodies, and the contemplative “Girl In a Coat”, a song about a man who has seen the world but to whom nothing is like the sight of his love (“Been caught, I’ve been shot, I’ve been buried alive / But that’s nothing compared to the look in her eyes”).

The title track is cleverly positioned halfway through the record; “Did you haunt the Goldwing, 1980 / Ride my baby ride / We rode so low past the Devil’s gate / Then up through the valley below,” Earley sings through heavy harmonic effects and warm melodies: again, the Honda motorcycle becomes the vessel to escape from the small town and venture into the world beyond.

“Astronaut” is oddly very reminiscent of Elton John “Rocket Man” as much as “Taking It Easy Too Long” is of the Eagles; “Street Fighting Sun” with its hard-rock guitar solos is one of the best moments of American Goldwing.

The touching, melancholic, Dylan-esque “Stranger in a Strange Land” is both thematically and musically the perfect closer: “Yourself a stranger in a stranger place / With your beat up shoes and an old suitcase / And a wristwatch that don’t ever seem to tell the time,” and “I grow tired of this highway / It runs far but never my way” excellently epitomize the themes of lost love, inadequateness and the feel of not belonging to any place and time that run through the whole record.

American Goldwing has managed to perfectly achieve the vintage Americana feel, but this prevalent sense of nostalgia sometimes becomes a bit too sugary and repetitive.  All songs are really enjoyable but most of them seem to say something that’s already been said either by the band or by someone else before.  Its true that this can be read as an honest and unpretentious interaction with rock history and that the comparison with the nearly perfect Destroyer of the Void which was only released last year is definitely not doing American Goldwing a favour, but somehow stylistically the album is a step backwards in Blitzen Trapper career.

MP3 Stream: “Love The Way You Walk Away”