<img src="http://www.qromag.com/wp-content/uploads/2010/08/blitzentrapperdestroyer.jpg" alt=" " />Indie-country/jam seems to have diminishing returns, even for Blitzen Trapper. ... 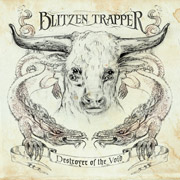 The latest take on indie-country, mixing party jams & soul-touching ballads, has found a lot of success in the indie, jam & mainstream worlds, but its popularity has been based more in live shows than in recorded output, which has been of middling quality.  Any genre is going to have its middling members like Dr. Dog (QRO live review), and even the occasional wildly overrated act like Fleet Foxes (QRO album review) – but there have thankfully been some bands whose albums stand up on their own, such as the lesser-known These United States (QRO live review) or the fairly successful Blitzen Trapper.  Unfortunately, even one of the genre’s best has now fallen into declining output with Destroyer of the Void, as the Portland group eschews the solid or crazy seventies they used to employ for that decade’s guitar-wankery added into sixties neo-harmony folk.

Opener "Destroyer of the Void" pretty much sets the tone for the album of the same name, with some Beatles-sixties harmonies both over-country-fied and going into a seventies guitar-rock party halfway through.  The folk-ish harmonies are dominant on Destroyer, but rarely used for memorable effect, and often paired with indulgent guitar-rock.  While on their last record, Furr (QRO review), Blitzen Trapper tapped into what was great about the Me Decade, Destroyer just arbitrarily takes sixties & seventies sounds and does little remarkable with them, save for odd mash-ups.  Some of the pieces are decent enough, like the literal "take me back" call in "Dragon’s Song", and Blitzen know harmony-folk well enough on "Below the Hurricane", but those are the exceptions.

And there is another, more significant, more impressive exception: when the band delves into Dylan-esque storytelling mode, most notably on "The Man Who Would Speak True", a sixties-folk vagabond story that evokes "Tangled Up In Blue" in all the right ways.  Destroyer closes with the other two tales on the album, the more upbeat "The Tailor" and the old-old Dylan "Sadie" – which is, of course/unfortunately, reduced in importance by being brought down to harmony level.

For a style that has found fame from its live show, alt-jam/country/folk artists of today like Blitzen Trapper, Dr. Dog, or These United States have been surprisingly prolific with new material & records (only Fleet Foxes seems to have disappeared – please, stay that way…).  Maybe that’s because taking from the past doesn’t require as much hard work as a lot of ‘modern’ music.  Blitzen Trapper have the chops to produce some great music, not just aping the past but making it their own on Furr & the prior Wild Mountain Nation (QRO review) – how about taking your time on the next one?

MP3 Stream: "The Man Who Would Speak True"