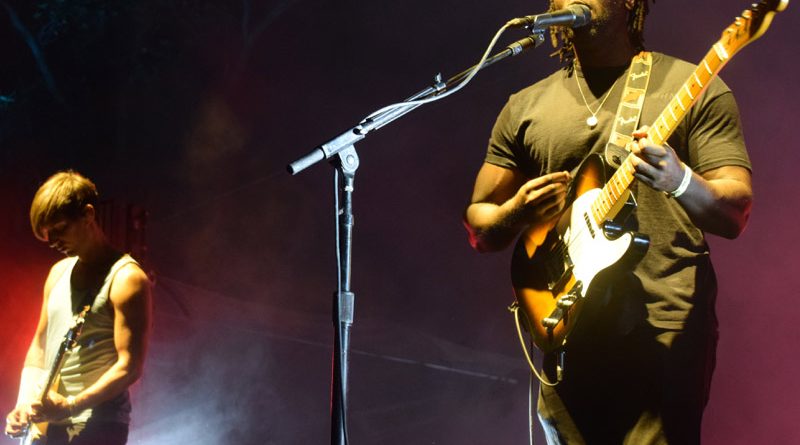 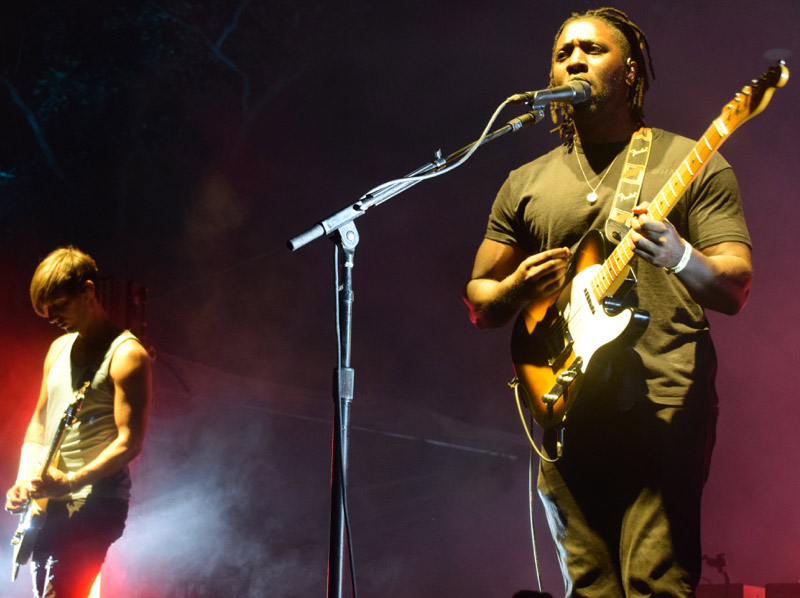 Photos of Bloc Party, at the start of the Silent Alarm tour, at 2019 Riot Fest in Chicago, IL

In 2005, Britain’s Bloc Party released their seminal debut Silent Alarm to universal acclaim, voted ‘Album of the Year’ by NME, and putting them among the leaders of the new wave of British indie rock of that decade. A decade-and-a-half has passed since then, band members have left & been replaced, and subsequent records haven’t been able to match that breakthrough, not to mention music moving on ever faster & faster. But Bloc Party brought Silent Alarm back, doing a full North American tour of the record, coming to New York’s Central Park SummerStage on Friday, September 20th.

It might have been almost fifteen years since they rang their Alarm, but SummerStage was still packed, stretching this year’s new layout (QRO venue review). Even one of the security guys was psyched – or rather his “fourteen-year-old self” was, joking that he couldn’t keep the usual serious look that security people must sport. Yes, this was a show for those reliving their indie-rock George W. Bush/Tony Blair-era youth, back before millennials and EDM took over everything and we had to deal with the likes of Donald Trump & Boris Johnson (remember when W. was the worst president ever, and Blair was America’s poodle?). But it’s a really good record, one well deserving of the full album play tour. 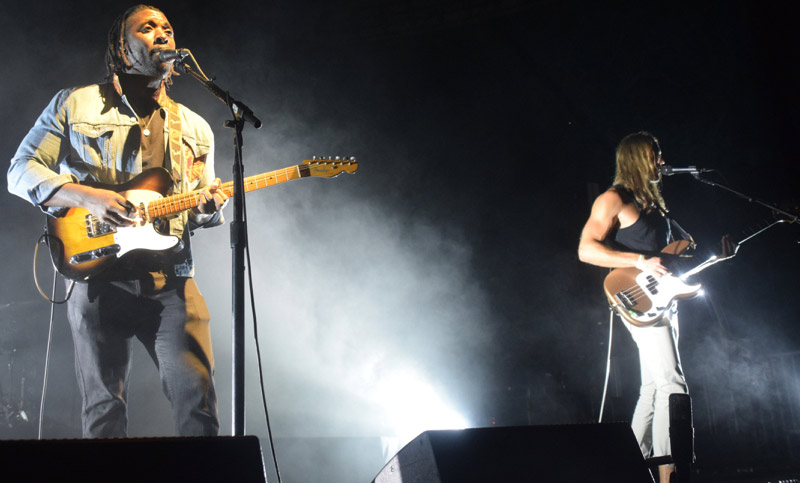 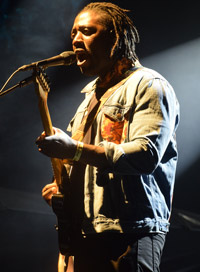 Notably, though, Bloc Party didn’t play Alarm top-to-bottom, but bottom-to-top. Album track lists are made for listening to, not for playing live, and it can often be difficult to shift instruments, tuning, etc. (thankfully, even the Pixies abandoned their too-clever-for-their-own-good original habit of playing songs in alphabetical order). Bottom-to-top is an interesting choice, not the order one would have expected – indeed, one would have been forgiven for not realizing it had been that way unless looking at the set list & track list later on – but also not a solely self-determined list. 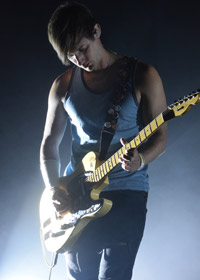 On the positive side, this meant that a night where you knew what they were playing, there was still a surprise. On the negative, Silent Alarm’s start is relatively stronger than its finish, and was designed that way – the moody record closer “Compliments” was a strange beginning. But it did let the subsequent “Plans” serve as more of a big open, and an early sing-along of “And your nose is bleeding” for “Luno”. Of note throughout the show was the amount of not just sing-alongs (to be expected) but also stamp-alongs, like with the strong rhythm of “She’s Hearing Voices”, and hands in the air for pieces such as the driving “The Pioneers”. It made the whole night more of a slow burn, like going from the softer “So Here We Are” into the slow burn-in-and-of-itself “Little Thoughts”.

Singer Kele Okereke did enjoy some jokes with the audience, like when he thought that that someone shouted, “Get my bulge out? Only if you throw money on stage. Cash – not coins…” He remembered his year living in New York, where he would walk up from the West Village to Central Park, ride bicycles and get stoned. That was before yet another sing-along, on the beautiful “This Modern Love”. He joked, “The people of New York City deserve a guitar that’s in tune” when tuning his after “Voices”.

But of course it was “Banquet” that was the biggest song of the night. That was their breakthrough, their calling card, their signature. It was impossible not to sing along, and actually showcased an advantage of playing back-to-front: instead of peaking early as the fourth song, it came as fourth-to-last on the main body set list. And that continued with the big one-two finish of the Silent Alarm play, Alarm’s two-one “Helicopter” (whose sing-along rivaled that of “Banquet”) and “Like Eating Glass”.

For the encore return, with Alarm done, it would have been easy for Bloc Party to do some songs from their subsequent records – but that would have been a bit of a comedown. Instead, they did some rarities (as well as “The Prayer” from A Weekend In the City – QRO review). Indeed, two preceded Alarm, first “Skeleton” from 2004’s Little Thoughts EP, and then, “One of the first songs we ever wrote,” “The Marshals Are Dead”. They closed with, “Two more rockets left in our pockets,” the synthed “Flux”, a bonus track from Intimacy (QRO review), and, “Back home, we call this sort of a song a ‘banger’,” “Ratchet”, where Okereke got his chance to spit lines like a grime rapper, and even jump into the crowd. 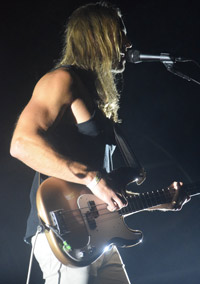 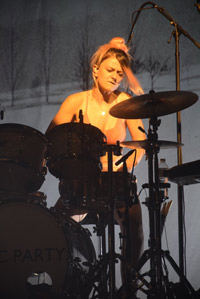 Special note should be made of how good-looking Bloc Party is. It’s not the most important thing, certainly not essential, but Okereke wasn’t the only handsome one up there. Bassist Justin Harris looks like a Hemsworth who went surfing, and guitarist Russell Lissack only looks not-jacked next to those two. And your correspondent took every chance he could to get photos of drummer Louise Bartie, who was the rare well-lit drummer. Indeed, there was better lighting than for a lot of acts – yeah, some strobe and maybe too much smoke machine at times, but it was great to see a band that remembers that they want to be seen, as well as heard.

Bands playing their breakthrough in full, in particular making a whole tour of it, can feel a little like cash-in nostalgia. But Bloc Party did it right with Silent Alarm, an album that certainly deserves the great show it got. 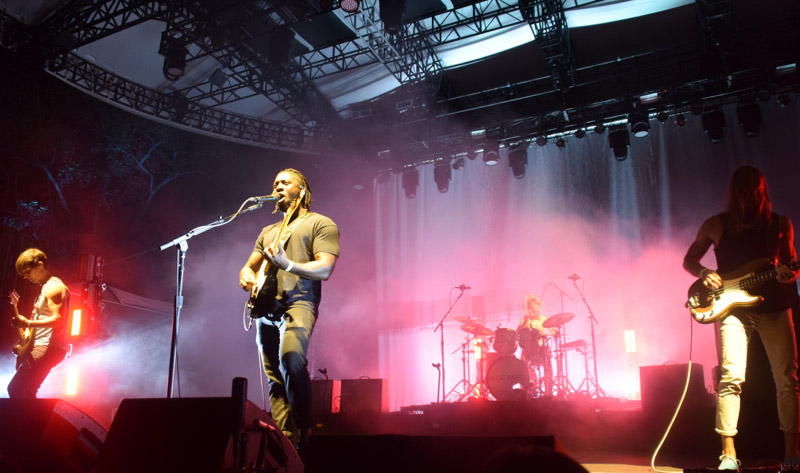