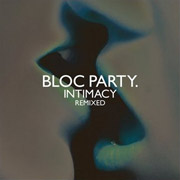 Add all three together, and you have one hell of a listening experience!

Bloc Party seem to be boldly devoted to the rather difficult endeavour of merging the guitar heavy sounds of modern post-punk and the futuristic sounds of the London rave scene.  So, in that way, a remix album is quite surely the logical conclusion to the bands earlier flirtations with electronic music.

Some critics and purists will claim that this is a simply an attempt to reuse old material for commercial gain; however let it be known that the remixes found on this album are without exception of an extremely high caliber.  From stripped-down edgy darkness, to pulsating bass lines, to almost euphoric triumph: It truly is an ideal melding of man and (drum) machine.

It’s the complete smooth and streamlined flow of the album, a rather subtle maneuvering through a range of dance-based styles, which makes Intimacy Remixed a success.  Like most critically acclaimed dance-based albums, the over-all whole is substantially better than the individual parts.  For all its distortion, synth beats and drum-loops, the feeling that this is a Bloc Party album rarely dissipates, and the sense of utter dance-floor elation never stops growing.