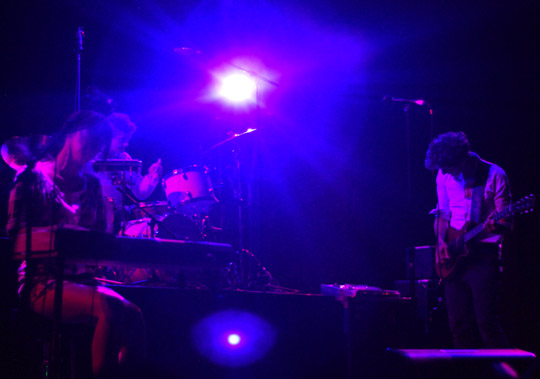 Click here for photos of Blonde Redhead at The Independent in San Francisco, CA on July 15th, 2009 in the QRO Concert Photo Gallery

Click here for photos of Blonde Redhead at Randall’s Island in New York, NY on October 6th, 2007 in the QRO Concert Photo Gallery

Click here for photos of Blonde Redhead at McCarren Park Pool in Brooklyn, NY on August 5th, 2007 in the QRO Concert Photo Gallery

Outdoors in the nighttime air is perfectly suited for Blonde Redhead.  The international trio of Japan’s Kazu Makino and Italian twin brothers Simone & Amadeo Pace play ethereal, enchanting indie-rock that can stretch out under the canopy of the stars.  So they were just right for Celebrate Brooklyn!, the summer-long concert series held at Prospect Park Bandshell (QRO venue review), gliding in on the Friday night of June 26th.

Blonde Redhead stayed with their later material, mostly playing from their last record, 2007’s 23 (QRO review), with all the rest from the album before that, 2004’s Misery Is a Butterfly, but one song, which was from the album before that, 2000’s Melody of Certain Damaged Lemons.  Naturally among the standouts of the night were 23 standouts like “Dr. Strangeluv”, “23”, and “SW”, but Melody’s “In Particular” was a particular audience favorite.  And the band returned for not one, but two encores (it was relatively early, as the shows must end by 10:30 PM, per park rules), including Misery’s enrapturing “Equus”, before closing on an excellent rendition of 23’s “Silently”.  Some early fans have never forgiven the band for moving away from the Sonic Youth-like (QRO live review) strains of their 1995 self-titled debut (produced by SY drummer Steve Shelley), but that was almost fifteen years ago, and the group has since fashioned their sound into a haunting atmosphere that’s also stylish and refined.  And outdoors at night, the effects are almost unreal. 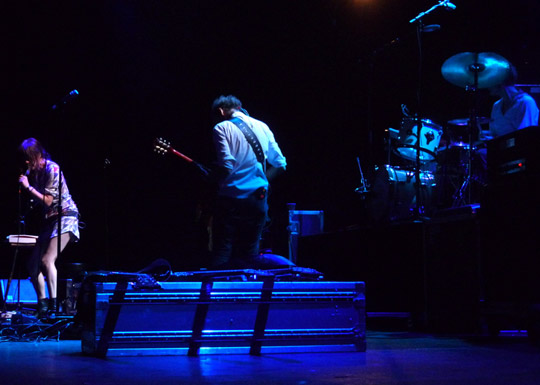 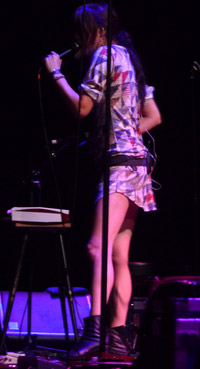 Singer/bassist/keyboardist Makino naturally draws a lot of the attention, not just for her feathery vocals, but also for her ghost-like beauty: there might not be a better pair of legs in indie-rock, and her dress was almost as feathery as her voice.  When she isn’t playing an instrument, just singing, she contorts and expresses to the world.  Plus, when speaking to the crowd between songs, her shy, sometimes halting English adds an Asian-cute aspect to her appeal.

This isn’t to dismiss the brothers Pace.  It can always be a little disconcerting to see twins when you don’t expect them, especially when they look so different than Makino: older, even weathered, with short Italian curls, about the only thing they have in common with her is their skinniness.  Singer/guitarist Amadeo has his own chilly effects when he sings, but it is his guitar work that forms the backbone of Blonde Redhead. 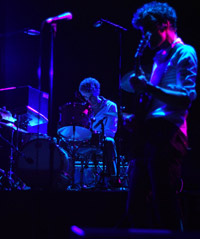 Rain had been trickling down all day, but let up by the time the band took the stage.  They did miss the ‘magic hour’ of twilight, but their music lends itself to the darker evening and the Bandshell’s excellent light show.  Like at most free Celebrate Brooklyn! shows, there was a rather too large ‘VIP’ area up front, with chairs filled by older adult ‘friends of Celebrate Brooklyn!’ sitting down, and expecting that the large open space in front of them wouldn’t be filled with standing, dancing young people (they were disappointed).  But Blonde Redhead’s sound reached far and wide that night at Prospect Park. 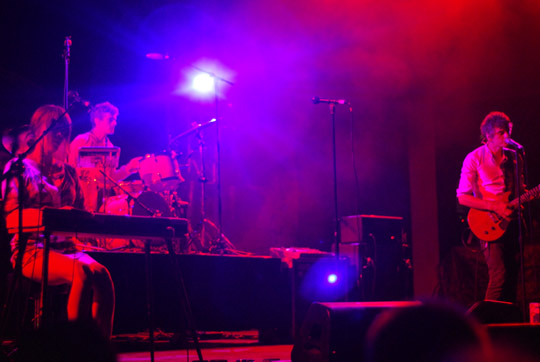 Weather Pending : And How!

Ryan Lenssen of The Most Serene Republic