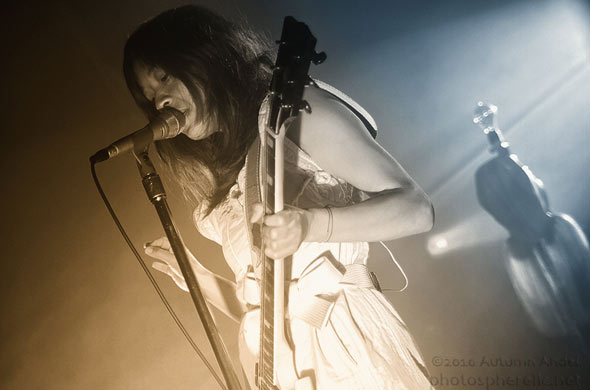 Click here for photos of Blonde Redhead at Sheperd’s Bush Empire in London, U.K. on September 29th, 2010 in the QRO Concert Photo Gallery

There’s a new business in Portland that offers sensory deprivation tank soaks.  The purpose of a 90-minute soak is to rid the soaker of all stimuli, giving them a chance to forget about the outside world.  The water is kept at a temperature that is “skin-receptor neutral”, meaning that the soaker loses track of where their body ends and the water begins.  This is how one could describe the experience of listening to Blonde Redhead’s newest album, Penny Sparkle (QRO review).  Their current tour is in support of the record, and their Saturday, November 20th show at Portland’s Roseland Theater played out just as you would have imagined.  The almost hour-and-a-half long set was just narcotic enough to make you forget where you were. 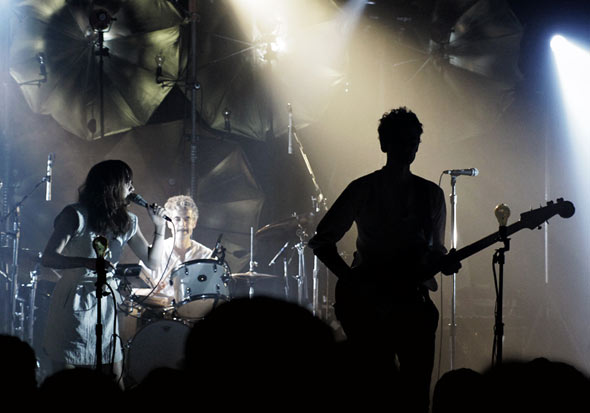 Click here for photos of Blonde Redhead at The Independent in San Francisco, CA on July 15th, 2009 in the QRO Concert Photo Gallery

Click here for photos of Blonde Redhead at Randall’s Island in New York, NY on October 6th, 2007 in the QRO Concert Photo Gallery

Adorable opener Ólöf Arnalds (QRO photos – of múm) enchanted the crowd, playing a leisurely, folk-y, nine-song set.  The talky latecomers filtering in throughout her set aroused audible irritation from the enrapt early birds, which, given the usual atmosphere of the no-frills rock venue, was somewhat surprising.  But Blonde Redhead’s been around for almost two decades, and their loyal fans took everything about the night seriously.  One guy informed your correspondent what the set would more or less comprise of before the band even walked on stage: they’d open with “Black Guitar” (they did), play most of Penny Sparkle (confirmed), and trot out some old favorites like “In Particular” from 2000’s Melody of Certain Damaged Lemons (hit the nail on the head).  Kazu Makino (vocals and guitar), twins Simone (drums) and Amedeo (guitar, vocals, keyboard) Pace, and a new, unnamed keyboardist took their places on stage, and the audience had the expectant faces of seasoned fans who know what to expect, and were willing lose themselves in the experience without a fight. 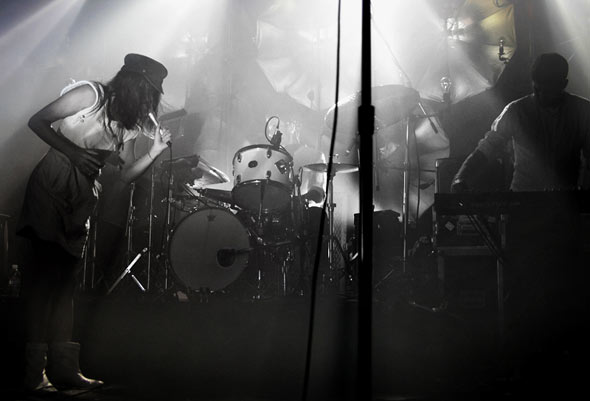 Click here for photos of Blonde Redhead at McCarren Park Pool in Brooklyn, NY on August 5th, 2007 in the QRO Concert Photo Gallery 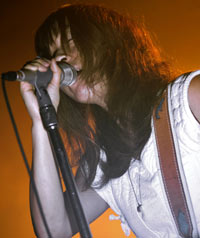 Since 1993, Blonde Redhead’s sound has matured from post-punk clatter to the current cocoon-like electronic-enhanced warmth of Penny Sparkle, but their strange make-you-cock-your-head melodies have always been the centerpiece of their sound.  The uneasy, tide-washing-in feel of “Black Guitar” illustrated this.  Amedeo and Kazu shared vocals on the first song of the night, the latter undulating in era-less garb that included a glass and horsehair cow skull mask.  Gold-hued photography flash umbrellas lined the wall behind Simone, and light bulbs in mic stands flickered like flames.  As for the stage lighting, somehow a palette ranging from shades of pink and violet to cobalt and chartreuse seemed perfectly natural.  Every song ended in blackout.  It all seemed part of some covert plan to lead concertgoers into Blonde Redhead’s otherworld. 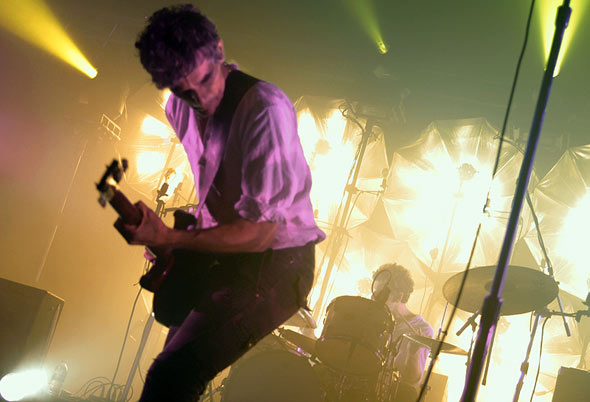 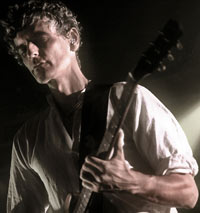 About a third of the way into the set came “Will There Be Stars”, a song in which Amedeo took lead vocal duty.  The song had more of an open feel than much of the night’s other material, with rhythm more central to the song structure than melody.  Simone’s drumming was featured prominently, and the spotlight on him was also literal -a single umbrella was lit behind him as Amedeo sang the vaguely existential lyrics: “It’s never gonna be like the way it’s meant to be / It makes no sense to me… / Will there be stars on our crown?” 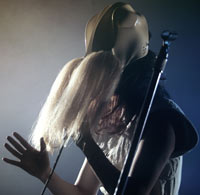 Amedeo spoke more than anyone else onstage – and by ‘more’, that means he said “Thank you” three times over the course of the evening, while Kazu thanked the audience twice.  The drama of their art-school-grown-up performance was only made more potent by their silence, though, and don’t think anyone minded.  When Kazu moved like molasses on the aching “Spain”, hand over her mouth as if taken aback by her own, devastating (and knowable to the audience) revelations, the audience watched in wonder, feeling privileged to be included at all. 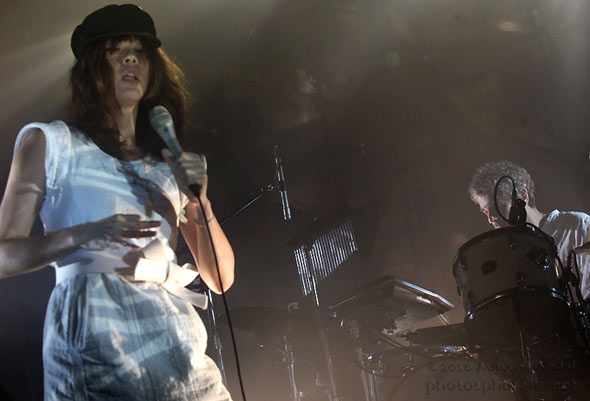 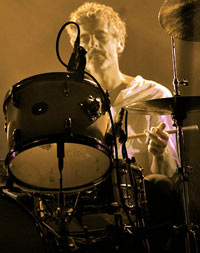 Evidence of their former, louder, guitar rock-centric days made its appearance now and then, and the most compelling of these moments was during the three-song encore.  The final song of the night, “Melody of Certain Three”, found Amedeo and Kazu, both on guitar, really interacting with each other for the first time all night.  He put his head in the small of her back while they played, which, while a weird gesture in comparison to the more usual two-guitarists-facing-off move, made for a perfect closing image.  On record, it always seems like the band’s songs could go into a major key at any moment (but they never do).  Just as, live, Blonde Redhead could have taken the extra step at any point and been a little more relatable.  But uncomfortable comfortability is their forte, and Blonde Redhead are not likely to ever take a chance on normalcy.  Good thing their fans expect nothing less of them. 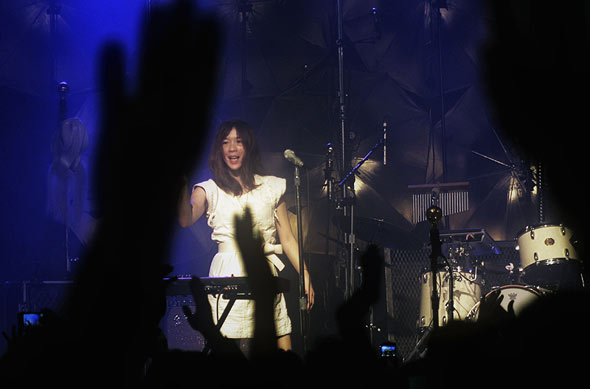