Fully armed to articulate her hyper-niche of soul-saturated, disco-dark street pop to Atlanta’s Terminal West, DeTiger effortlessly bass-burnt us all to a cinder just by showing up.... 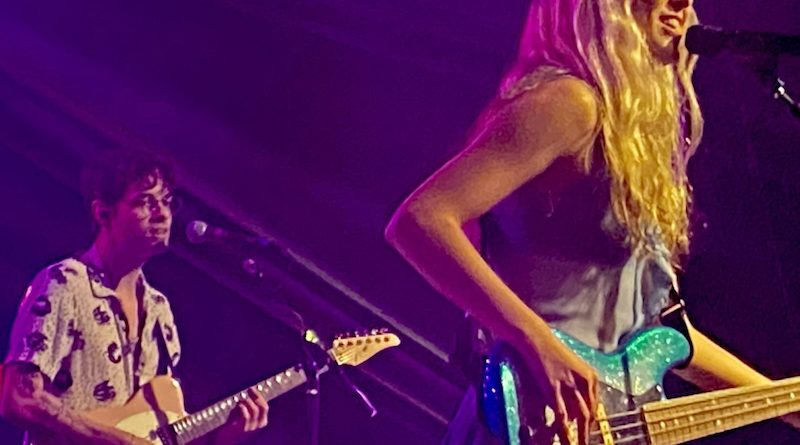 Click here for photos of Blu DeTiger at Axis Club in Toronto, ON, Canada on November 5th, 2022

There is a covert and indefinable element within low registers and undertones of music that, seemingly biologically, belongs to women. It is not at all that men do not encounter, feel, and transmute those contrabass colors in dazzling decipherings all their own, and daily, but something else, a thing both absorptive and reflective, happens anytime a feminine fancy and a fat string pair off and square off. Perhaps it has some filament of connection to the secret lives of all women, the bottom-end thrum of held emotions buried by long worlds of time (including many segment of the historical chapter we currently inhabit) wherein being female meant there were encyclopedias of experiences you simply were not permitted to have, the two-cans-threaded-by-a-string form of subversive communication women developed to express those inexpressibles to one another in public settings without getting caught, and the way in which women’s contributions in all areas of life and art are often hugely felt but never seen.

Throughout rock history, and across every genre of sound, whatever naturally welds women to walls of washtub and timpani has led to a proliferation of premier bass-playing baddies, even in evolving eras when girls who played electric guitars were still years away from being as commercially commonplace. In the grand tradition of Kim Gordon, Suzi Quatro, Tina Weymouth, Abby Travis, Melissa Auf der Maur, Kim Deal, Sean Yseult, Wanda Oritz, Kira Roessler, Atsuko Yamano, Laura Kennedy, Sara Lee, Aimee Mann, Gail Greenwood, Tal Wilkenfeld, Esperanza Spalding, Rhonda Smith, Meshell Ndegeocello, Carol Kaye, D’Arcy Wretsky, Nikki Monninger, Laura Lee, and Kay Stanton comes now the Aphrodite of New York bass girls. Her name is Blu DeTiger and she has arrived to show you the way to the cosmic crossroads where the Bee Gees and Babes In Toyland brush against one another to become one sestina-slick syllabub for the ear palate. On Monday, November 28th, fully armed to articulate her hyper-niche of soul-saturated, disco-dark street pop to Atlanta’s Terminal West, DeTiger effortlessly bass-burnt us all to a cinder just by showing up, and we floated away the most appreciative lot of audio ash this side of Flea’s last cigarette.

Blu DeTiger and her older brother Rex DeTiger are dyed-in-the-sidewalk-grit NoHo natives exuding that punching brand of New York pizzazz that used to freely decorate nearly every side street of the Big Apple but now must be aggressively hunted to be found. Unlike so many of their age-peers, nothing whatsoever about their impressive musicality is ventriloquized, not even Blu’s Piscean name, which is neither a nickname nor a stage name but the name given her at birth by Rex himself, the first of many bonnes fêtes and esoteric exchanges between these elegantly entwined siblings. Picking up their respective instruments when they were seven and ten, both Blu and Rex are each in possession of different inflections of that rarest kind of congenital cool that will do things for you in life like land you in one of Virgil Abloh’s cult-worthy Off-White Look Books, which it did for the DeTiger dyad in 2018 when both were just barely into their twenties. Rex is a tour de force of tranquil talent, tactical and tailored behind the kit, tender and thoughtful as the understated counterpart to his sister’s curveball of charisma.

The DeTiger siblings deftly depants any preset expectation of literal drum and bass duos. Both are formidably hip, easy as a leather recliner on stage, and their silken bond is visible and audible inside every song. For this, among other gleeful reasons, there is no rationed laughter at one of Blu DeTiger’s performances. Blu and Rex communicate wordlessly and constantly with that Mithraic chain of telepathic reason shared only between two blood-related individuals who can never and would never defamiliarize their days from one another.

For all his youth, Rex DeTiger demonstrably understands a deep and primeval humanitarian truth about  real pleasure in this life – that it is always and exclusively born of guileless generosity. He lingered onstage to meet any and all fans that wished to greet him afterward, many of whom seemed already to know him well from other in-person and online encounters. He embraced everyone and performed that matchless magic trick of being a shy person who instantly opens even the shyest other person by sheer force of the openness in his own smile. Rex is cherished and acknowledged amongst DeTiger devotees for his considerate commitment to self-designing and producing intricate, bespoke gig cards for every show that he and Blu complete. He presents these precious pourboires to any audience members who approach him – a suprasonic souvenir commemorating each night of any DeTiger tour and a telling token of the same brightness of spirit and warmness of heart that so define both his drumming and his demeanor.

I personally adore any woman with no gentle decree about her. Receiving formal training at both New York University’s Tisch School of the Arts and the Clive Davis Institute of Recorded Music, Blu DeTiger is such a woman, and she has lived as no stranger to the subwoofer, the art of string-slapping, or the strident rigors of the stage since her earliest days. She played CBGB’s at all of age 7 as part of the rock curriculum of the children’s music school she was enrolled in, and served as a touring bassist throughout her teens for leading sheila songwriters such as Caroline Polachek and Fletcher. Having spent childhood summers with her artist parents in Ibiza, she simultaneously began to emblazon a freeform understanding of nomadic DJ culture into her own approach to songcraft well before enigmatic electro-duo The Knocks produced her first official single, “In My Head,” in 2019. Atlanta was treated to crowd-confectionery “Cotton Candy Lemonade,” as well as “Figure It Out” and “Vintage” off her debut EP How Did We Get Here?, released on March 5th, 2021 via ALT:VISION Records with significant production credits to Rex.

Rounded out in the tour setting by the masterly munifications of Horace Bray on guitar, Blu DeTiger and her band of boys ran through all the favorites of her ever-expanding catalogue, and a cool cadre of covers retooled to resplendent reissue as well. “Tangerine” had definite gasoline on it, and yes, if you see her live it will be apparent that Blu should, indeed, wear every kind of crown. “Elevator” did not so much ascend as it detonated, pressing every pertinent button on its way up. Owing her own distractingly enviable mane of mermaid tresses to the Dutch roots of her father, Blu’s “Blondes” had all the fun and then some, flexed on every ex, and resonated with every color of curls in the place and probably the place next door too. At each sublunar shift in rhythm or motion, Blu was a sublime surfer-Valkyrie leaning headfirst into the whorl of a wave. “Atlanta is dope,” she proclaimed mid-show, tossing her head in a corkscrew like a defiant racehorse as she did, announcing that it was her second time here and expressing hope that her third visit was not too far down the highway.

The continuum of Blu DeTiger’s career has been a bona fide bonbonnière of beat-thinkable blends of sound concocted in a highly gratifying buddy system populated by her mentors and neighborly musical marriages. Her chess-like collaborative moves nearly equal her singular output, and she has so many friends making so much danceable music (back to that New York City moxie thing!), there appear to be no aural avenues she is unwilling to artfully explore when asked. She chewed up the entire flooring of Biig Piig’s “Crash Course” with her crenellated chops, creating a bassline that rolled as if born on an 1980s skating rink while Debbie Gibson was on the stereo, provided turbid undergirding on “Stop Making This Hurt” by Bleachers, and brought undeniable good in the form of “Go Bad” to the soundtrack of the Netflix film entitled He’s All That. With Chromeo, she has conjured the eponymously ingenious “Blutooth” and a Tame Impala-worthy piece of funkchno full of swamp bubbles bursting in air called “enough 4 u” that leaves anyone listening clear on the point that no such satiety state for Blu’s sonic shakshuka stylings lay ahead.

With much of her early online amplification stemming from her beautiful basstardizations of famous songs by the likes of Prince and Janet Jackson, and with her covetable reimagining of “Once In A Lifetime” by Talking Heads now its own little poetic exhibit in the immortal interpretations of that song’s undying life, in Atlanta it was not a matter of whether Dame DeTiger would deliver a five-string photostat or not, but when and which. Those turned out to be a magical merging of Taylor Swift’s “Style” with Fergie’s “Glamorous,” followed by the smoothest sojourn across the tripadelic mayhem of MGMT’s “Electric Feel” since the Wesleyan wonders themselves took mushrooms and flew to the moon on a motorcycle. That song requires a galaxy-spanning girl to even marginally give it its proper due, and none could have rainbow-lit it any brighter than Blu.

On just as perceptible a display at every turn of this Terminal West show as her obvious spirit union with those femme-wired substratum sounds was her divine sense of sisterhood. During the covers sequence, she brought another girl bass player up out of the audience to jam with her, a giddy newbie to the instrument who sounded anything but rookie once she plugged in and who turned pastel pink as Blu complimented both her playing and her bitchin’ black-star bellbottoms that were fit for Radiohead to sing about. There is also a rumor that some annoyingly everywhere ATLien writer or another is prancing about with freshly purchased and too-infrequently washed “Bass Queen” printed socks, but who’s to say? All that we can be sure of is: these DeTigers are such that Shere Khan, Survivor, and ABBA would take note of their savage-savvy stripes, and everyone else in the jungle should follow suit.