Necessity is the mother of invention, and the COVID pandemic led to a lot of invention, usually involving doing something from home that you used to do in-person, and... 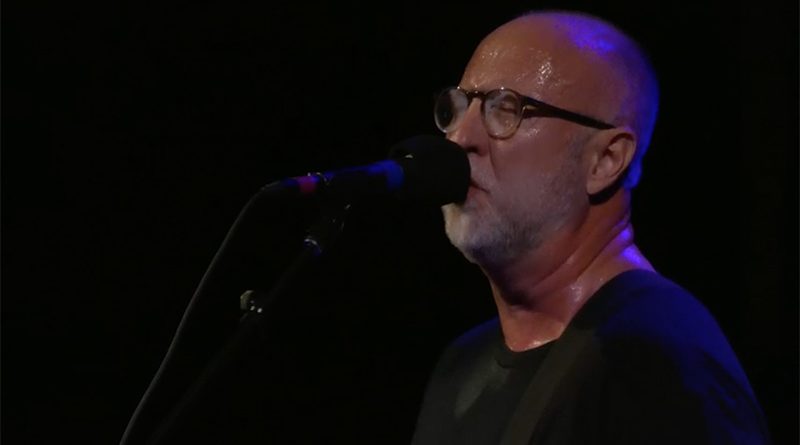 Necessity is the mother of invention, and the COVID pandemic led to a lot of invention, usually involving doing something from home that you used to do in-person, and usually doing it on your computer screen. Yet we all still agree that on-screen is no replacement for in-person, from kids being taught to adults watching a show. We hesitantly headed to outdoor shows & festivals during the late summer, and as the weather slowly turns we’re even going into indoor venues. But we haven’t tossed aside what we learned during the heights of the crisis, and if by now livestream shows aren’t a novelty or essential, we’re also much more familiar with them. Indeed, there are definite ‘comforts of home’ advantages, seeing artists far away to the lower drink prices of your close by refrigerator. So, it was still great to see living legend Bob Mould, along with “slightly famous” opener & friend Jason Narducy, on a livestream from Stoughton Opera House in Stoughton, WI on Saturday, October 16th.

The name “Opera House” may have brought to mind some giant hall & stage that would shrink solo performers, but thankfully the venue is actually a smaller affair, on the second floor of the Madison suburb’s City Hall. It is seated, and the patrons were all wearing masks, as they were asked to do by management just before the show began. Indeed, it appeared that, to get a drink, one had to go downstairs to the lounge, where you could also take off your mask and, “Think about what you’ve done…” But if you were watching from home, no mask needed, and drink right there.

The crowd seemed to be an older one (at least from what could be seen on screen), and most had gotten their tickets for this show back in 2019, before it & everything else was cancelled. One person noted that he or she had gotten theirs in 2020, with management calling them an “optimist,” for thinking that live music would come back. But it has.

Opening for Mould on tour has been Jason Narducy. While his obvious connection is that he plays bass in Mould’s band, Narducy is a musical force in his own right with his band Split Single (that includes fellow Mould band member, drummer Tom Wurster). He even was part of putting together a musical based on his high school band, Verböten, who found belated fame when much later cited by their singer’s cousin, Dave Grohl. There was also his nineties band Verbow (name oddly no connection to Verböten…) – hell, Narducy even is the touring bassist for Merge Records founders Superchunk (again alongside Wurster). And he’s one of the funniest musicians on social media (again, up there with Wurster).

During the pandemic, Narducy started doing ‘lawn shows,’ where he would perform, and his local Evanston, Illinois venue Space would provide drinks & food, all socially distanced. He eventually took that on the road, and now has brought a version of it indoors to his opening set. Between songs, Narducy had many jokes and stories, including noting that his wife said to him, “You’re not going to tell stories after every song, are you?” – Narducy added that the crowd probably isn’t as sick of hearing his voice as she is. There was a story about recently going to a McDonalds and smoking room in a hotel outside of Bloomington, and a really touching tale about when twelve years ago, on tour with Mould in Portland, his wife’s water broke two weeks early, so right after playing that night’s show, was ferried to the red eye flight that Mould bought him by his wife’s sister, ferried from that airport by his mom running red lights, and made it to see his daughter’s birth. And when he told his daughter that at age eight, he added that the story is in Mould’s autobiography, See a Little Light (QRO review), with which she exclaimed that the family is famous, before being corrected by Narducy, to which she replied, “We’re… slightly famous.”

Of course, it wasn’t all stories, but when you’re up there alone on stage, not even a fellow band member to banter with, you have to engage the crowd, particularly if they might not be familiar with songs like “Untry Love” or his heartbreaking “Satellite” from his latest Split Single record, Amplificado (QRO review). And many stories tied into the songs, such as the origins of the title “Mangled Tusk”, or how the producer of “95%” sounded like R.E.M. classic “Gardening at Night” – with R.E.M. bass icon Mike Mills actually playing bass on Amplificado (Narducy had then sheepishly told Mills that he’d played “Gardening” hundreds of times in college, to which Mills replied, “Oh, I quit college to play that song…”). There were also stories about Verböten, both the band & the musical, before songs from the musical, tales featuring everyone from Grohl to The Dead Kennedys going to a country club on one conservative band dad’s dime.

Click here for all of QRO’s coverage of Bob Mould in QRO’s ‘Spotlight On : Bob Mould’ feature

Okay, so Bob Mould isn’t as funny as Jason Narducy, something Mould admits to (QRO Mould interview – though Narducy has said Mould is quite funny, too – QRO Narducy interview), but when you’ve got a catalog as long and deep as Mould’s, don’t need to be. He’s a punk rock veteran from his eighties days with Hüsker Dü, alt-rock boom in the nineties with his band Sugar, and has a solo career recently celebrated in a massive box set, Distortion: 1989-2019 (QRO review). And he’s not one to rest on his laurels, having put out his latest record, Blue Hearts (QRO review), just last year (finished days before the pandemic hit). Mould is even a veteran of solo shows (QRO solo live review).

Like many artists who put out albums during the pandemic but couldn’t tour, this night & this tour have been a chance to play the new songs, so Hearts got a showcase, something Mould admitted to, playing four in a row in the middle of the set, “Next Generation”, “American Crisis”, “Forecast of Rain”, and “Password To My Soul”, as well as “The Ocean” & “When You Left” back-to-back to start the encore. While something was lost in the overall power with just Mould up there (Narducy & Wurster are in the full band for a reason…), it was great to see Mould really giving his all on the new songs.

And yes, there were also old songs. Early on, he reached back to Hüsker for “Flip Your Wig” and “I Apologize”, plus Sugar’s “Hoover Dam”, and later on Dü’s “Celebrated Summer” & “Hardly Getting Over It”, plus Sugar’s “If I Can’t Change Your Mind”. Those are all classics, but have also been staples of Mould’s live show for over a decade now, and there will always be old songs of his that you’d wished he played [cough-Zen Arcade-cough]. And his solo career box set (which does include Sugar) has brought some rarer solo songs into the set list, such as “Stand Guard” from 1990 sophomore solo album Black Sheets of Rain and “Sinners and Their Repentances” from 1989 solo debut Workbook (QRO deluxe edition review). It was also interesting to see Mould integrate twenty-first century songs into the performance, songs like “Sunshine Rock” from the 2019 album of the same name (QRO review), which are becoming staples (“American Crisis” looks like it will be a future staple). And he still closed the evening on, “A happy note,” with Hüsker Dü classic “Makes No Sense At All”.

While not as verbose as Narducy, Mould did have some banter of his own, from realizing he had to start counting calories during the pandemic downtime to, “This is the part where I get political.” Mould had already been comparing our current times to the early eighties before the pandemic broke, but noted the direct correlation of a pseudo-religious Republican president ignoring a disease and telling gays they’re less than. He had written angry songs before COVID broke out, touching on fractured government, alternative stuff – “Not alternative rock; alternative stuff…” (will never forgive the alt-right & Kelly Anne “Alternative Facts” Conway for making alternative a bad thing…).

Oh, and there was one other special thing: It was Bob Mould’s birthday! This was joked about early on, and at first seemed like just a side note (birthdays on the road can be tough), but in the encore Narducy came to the stage with a cake & candles that he & Wurster got Mould, to the birthday boy’s evident surprise. As was yelled in the post-break-up Hüsker Dü live album The Living End, “Happy birthday to Bob!”

Bob Mould & Jason Narducy’s tour continues, and if you missed this one in your hometown [like your correspondent], they’ll like be back on the road again soon (hopefully with Wurster in tow). But it was special to see them play a small town’s opera house, all from the comfort of your own home.