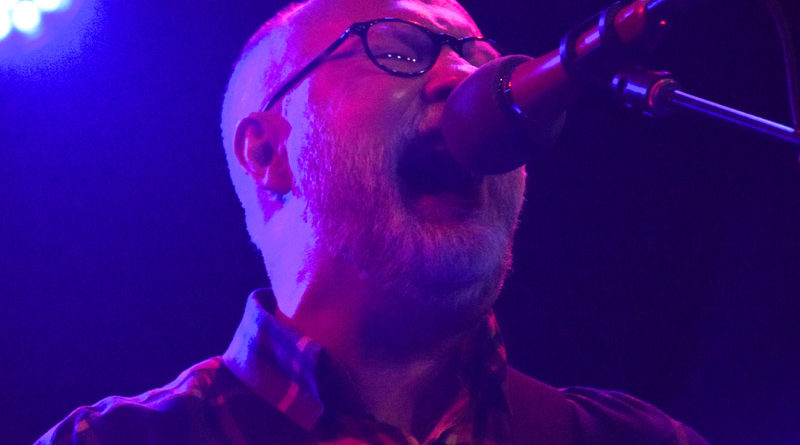 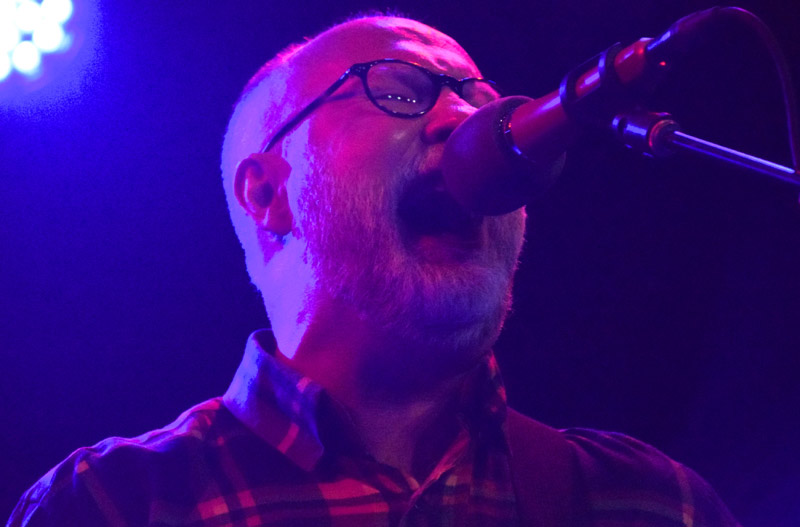 Click here for photos of Bob Mould at 2016 Riot Fest in Chicago, IL in the QRO Concert Photo Gallery

There are some artists who have off nights, aren’t feeling it, are under the weather, under a substance, prima donnas, too nervous, etc. – but not Bob Mould. The veteran alt-icon has been a force to be reckoned with for forty years now; indeed, his current tour is a celebration of forty years since his first live shows, way back in 1979 Minneapolis with seminal punk act Hüsker Dü (QRO spotlight on). He’s had all sorts of ups & down since then, from Hüsker’s dissolution to his nineties alternative hit Sugar, poorly received turn-of-the-century electronic foray to his current beyond-cult popularity, but he’s always been on point, such as on Thursday night, February 21st at Brooklyn Steel (QRO venue review).

Mould is touring behind his umpteenth excellent record, this month’s Sunshine Rock (QRO review), as well as celebrating his forty years of performing. He’s definitely an older man, but doesn’t show it on stage, from bouncing around through to fury on vocals & guitar. Indeed, it’s neat to see him not just keeping up with his younger rhythm section, Jason Narducy on bass and Jon Wurster on drums (both of nineties punks/Merge Records founders – Mould’s current label – Superchunk, among other things), but set the pace up there. He documented his clean, healthy living in his memoir, See a Little Light (QRO review), among many, many other things in it (everything from Hüsker to his homosexuality to writing for professional wrestling…), and it shows. The crowd was also older, but not as heavily male as one might have expected (has Bob Mould become ‘couple’s music’?…)

Despite being the tour for Sunshine, this was not a ‘just the new stuff’ show/tour, not by far. While there was a long period where Mould shied away from his eighties Hüsker material, even pre-Sugar solo & Sugar music, by this point he embraces it all. Indeed, one of the excitements about seeing Bob Mould live, even if you’ve seen him many times before over the years, is wondering what old stuff he’s gonna pull out of his extensive discography on any given night. Admittedly, there are some that you know he’s gonna play, but always a few surprises.

Obviously not a surprise was the Sunshine songs. Mould definitely does not rest on his laurels, and clearly loves making & playing his new stuff. Yes, it sounds like his old stuff, but he’s long since hit the point where he’s accomplished enough that that it is what you’re looking for from him. Yet he & his band didn’t open with anything Sunshine, instead an incendiary “War” from 2014’s Beauty & Ruin (QRO review), one of three from a newer record that one actually wouldn’t have expect to hear so much from. It’s easy for an artist with a long list of albums to have a live show that is the new album, plus the old ones, and ignore all those in between, but Mould also doesn’t do that.

He does do Sugar, in particular perhaps his most commercially successful release of all, 1992’s Copper Blue. Coming out amid the Nirvana alt-boom, it’s also an amazing record (QRO deluxe edition review), and does always get featured at his shows, this time mostly early, with a driving “A Good Idea” following “War”, and “Hoover Dam” fourth. Yes, “Hoover” and later hit “If I Can’t Change Your Mind” are to be expected, even “Idea”, but right after the “Dam” came “Your Favorite Thing” from Sugar’s File Under: Easy Listening, a surprise and making for a nice, poppier one-two punch with “Hoover”.

After those and Hüsker Dü’s “I Apologize”, Mould headed into his solo work, both old and new. The evocative “See a Little Light” is a staple, but was followed by the cheery new “Sunny Love Song”, the first Sunshine piece on the night. The middle of the set was dedicated to the new, with “Sunny”, Beauty’s “I Don’t Know You Anymore”, “The Descent” from 2012’s Silver Age (QRO review), and “Thirty Dozen Roses” & “The Final Years” from Sunshine. Other than “Final”, the searing standout on the new record, none of these tracks could have been called expected, but were delivered well – though Mould has made so many songs that the titles & choruses begin to unintentionally overlap; some undoubtedly thought that “I Don’t Know You” was Hüsker’s “I Don’t Know For Sure” or “I Don’t Know What You’re Talking About”, and the title “Final Years” does sound like it should be on Silver Age…

“Final” might have been an anticipated new song, but led into two oldies that weren’t, “Sinners and Their Repentances” & “In a Free Land”. “Sinners” is a soul-searching piece from his first post-Hüsker work, 1989’s acoustic Workbook (QRO deluxe edition release), yet electric it paired well with the thirty years-younger “Final”. “In a Free Land”, meanwhile, is a very old Hüsker Dü piece – indeed, it leads off last year’s excellent early Hüsker box set, Savage Young Dü (QRO review) – that is still as relevant and powerful today (maybe even more so).

After that, Mould returned to the new (save for “Change Your Mind”), including Sunshine’s title track, another Beauty surprise in “Hey Mr. Grey”, and three more from Sunshine, “I Fought”, “Sin King”, and “Lost Faith”. When an artist has both beloved old material and wanting-to-showcase new songs, the question is always whether to bunch each into their own groups, or roughly alternate. Mould wisely chose the former, so Sunshine songs could stand on their own, and not be compared to late greats.

And there was still time for some more ‘late greats’, in two from Hüsker Dü’s most beloved, or at least most cult-loved, record, 1984’s seminal double-LP Zen Arcade. Mould has had a tricky relationship with Zen in the past (in Light, he said, “That record means more to other people than it does to me”), but both “Something I Learned Today” and “Chartered Trips” have become live staples – despite, or perhaps because they are from such a different age for him & us, songs about runaway youths on the streets in the eighties (during “Trips” there was even some slam-dancing by folks old enough to call it “slam-dancing”). Plus, between the two was “Losing Time” from most-recent-record-but-one, 2016’s Patch the Sky. 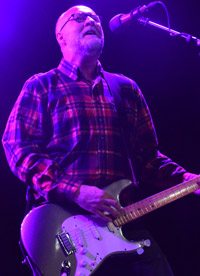 “Chartered” was a rousing close, but you knew that there was going to be an encore. What you didn’t know was that it was going to be more Hüsker, indeed started with more Zen, “Never Talking To You Again” (maybe another Hüsker song whose title could confuse with “I Don’t Know You Anymore”…), a powerful and serious kiss-off. Completely unserious, but also unexpected, was “Love Is All Around”, a.k.a. Sonny Curtis’ theme song to the Mary Tyler Moore Show. That seventies program was the biggest thing to ever hit Minneapolis when Hüsker Dü came out a decade later, and the punk band’s cheeky cover of it went from a b-side to fan favorite (even had a video). Recent years & events, from Moore’s passing to Hüsker’s anniversary, have brought it back, but it will always be a surprise. Bob Mould & co. closed with two more Hüsker songs, Flip Your Wig’s killer titular opener, and the Flip single/a-side to “Love”, another kiss-off, “Makes No Sense At All”.

But that wasn’t the close, as the band came back on for a completely unexpected second encore! Yes, many people left during the second encore break, because while encores have become standard in music, second encores have become rarities, but Mould pulled it out. Sunshine returned with “What Do You Want Me To Do”, Patch in extended and unfamiliar “Black Confetti”, and then maybe Mould’s most-played Hüsker piece, “Celebrated Summer”, to finally finish the big night. 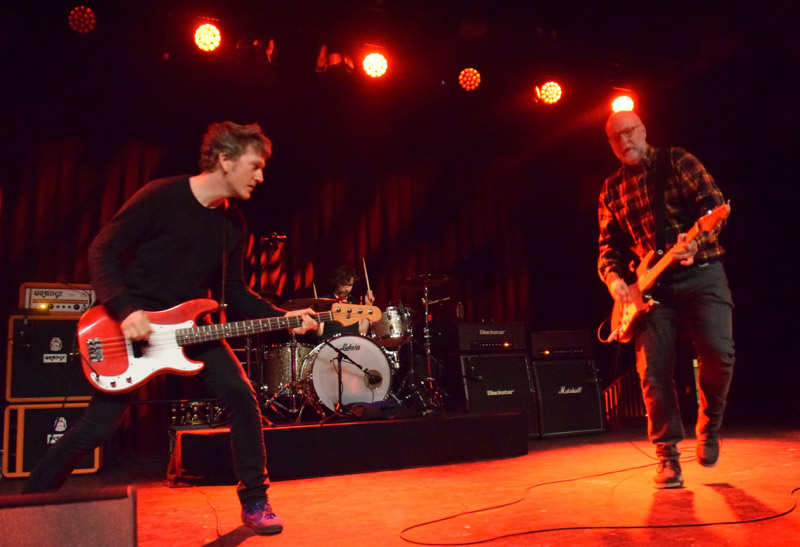 With any artist with such a long, celebrated, history, there are many, many songs one wished he’d played, from ancient Hüsker pieces – just don’t shout out for any from late singer/drummer Grant Hart (QRO interview) – to Sugar and earlier solo. And for those who’ve seen him a lot in recent years, repeats like “Celebrated Summer” and “If I Can’t Change Your Mind” don’t hit quite as hard, but do for those who are only finally seeing Mould after listening to him for such a long time. But there are so many reasons to see Bob Mould’s big tour, which includes him returning to the Twin Cities (with opener Porcupine, who feature Hüsker bassist Greg Norton; Steel opener Titus Andronicus – QRO photos – frontman Patrick Stickles joked that the old band should really be nicknamed “The Dü”, and not “Hüskers”, pointing out that no one calls inferior umlauted Mötley Crüe “Mötleys”). Because Bob Mould always delivers.

[special note: your correspondent was one of many fans who hit up nearby craft beer bar One Stop Beer Shop afterwards; he discovered that among its hipster nostalgia board games was none other than the original Hüsker Dü children’s game – one can only imagine what the bearded bartenders and other millennial clientele thought of all these random old folks taking a photo of the cover to this otherwise forgotten & obscure game…] 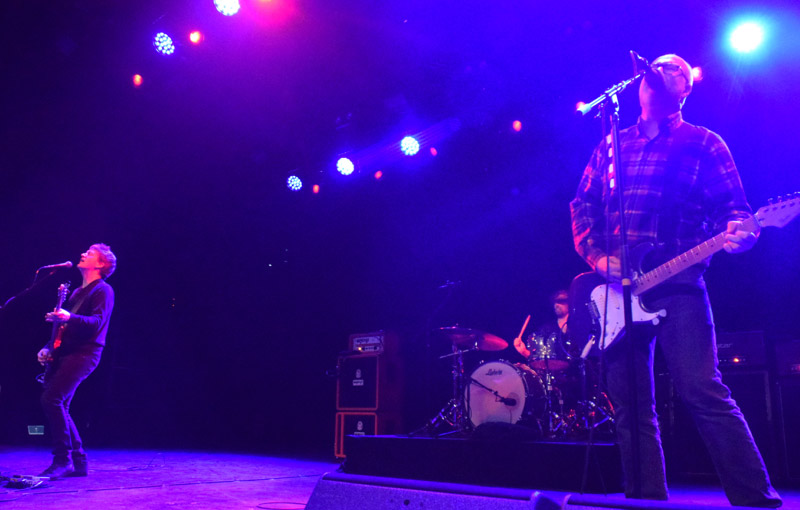