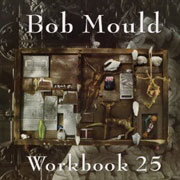 Twenty-five years ago, eighties punk rock legend Bob Mould emerged from the dissolution of his acclaimed Hüsker Dü (QRO spotlight on) with Workbook, his first post-Hüsker release.  Now the seminal record gets a quarter-century deluxe edition release, including a bonus track and recording of 1989 show on Workbook tour.

First things first, Workbook completely holds up – completely.  Indeed, it may still be his best solo record, as good as anything he did with Hüsker or later nineties trio Sugar.  Mould had shifted from the loud Hüsker to a near-completely acoustic record, which was very fitting for him going solo and looking to emerge as an artist under his own name.  From the first finger-plucking of opening instrumental “Sunspots”, Workbook is an emotional tour-de-force: “Wishing Well” a classic that comes perfectly after “Sunspots”, heartbreaking single “Heartbreak a Stranger”, best-known solo singles “See a Little Light” and “Poison Years”, piece about the good ol’ days “Compositions For the Young and Old”, airy and mystical “Sinners and Their Repentances” & “Dreaming, I Am” – and has anyone ever cross the capitol of Brazil with that of New Jersey (“Brasilia Crossed With Trenton”)?  And the electric songs, “Lonely Afternoon” and “Whichever Way the Wind Blows”, still feel a little sub the incredibly high par of Workbook.

Workbook 25 includes just one bonus track, “All Those People Know”, an outtake from the recording session, and a very catchy one – though added after the original eleven tracks, it’s not the closer that “Whichever” was.  Also it, along with four of the live tracks from the second disc, were already released a long time ago on Poison Years, a cash-in from Virgin Records after Mould left the label (which he himself told people not to buy).

The live second disc comes from the Cabaret Metro on the 1989 Workbook tour.  The performance includes all eleven tracks from the record, one b-side (but not “All Those People Know”), one cover (Richard Thompson’s “Shoot Out the Lights”, also found on Poison Years), and three Hüsker Dü songs (“Hardly Getting Over It”, “Celebrated Summer”, and “Makes No Sense At All” – none found on Poison).  While Workbook was recorded acoustic, Mould toured electric, so you get to hear many of the pieces in a new light.  “Sunspots” works acoustic and “Wishing Well” still comes perfectly out of it, though particularly improved over the record is the back-to-back-to-back of “Poison Years”, “Sinners and Their Repentances”, and “Lonely Afternoon” – the first & last fit better in an wholly electric setting, while there are even more strings to “Sinners” live.  Though before that “If You’re True” is a catchy live b-side (also found on Poison Years), after those three the show becomes a little too hard and electric for the material.  Instead, it comes back around in the close of “Shoot Out the Lights” (a great cover pick for a tour where he’d have to do a cover to fill it out), and then three acoustic Hüsker pieces, all of which are amazing in their own right and have since become live Mould staples.

Back in 2012 Bob Mould released the twentieth anniversary deluxe edition of Sugar’s seminal Copper Blue (QRO deluxe edition review), and toured it (QRO live review).  He still managed to fit in the new Silver Age (QRO review), one of his best solo records since Workbook, the following year.  This year he’s put out Workbook 25 and is touring it (QRO live review) – ever since releasing his autobiography See a Little Light (QRO review), he’s been re-embracing his older material, now the album that had “See a Little Light”, and one well worthy of a deluxe revisit.

Bob Mould – All Those People Know