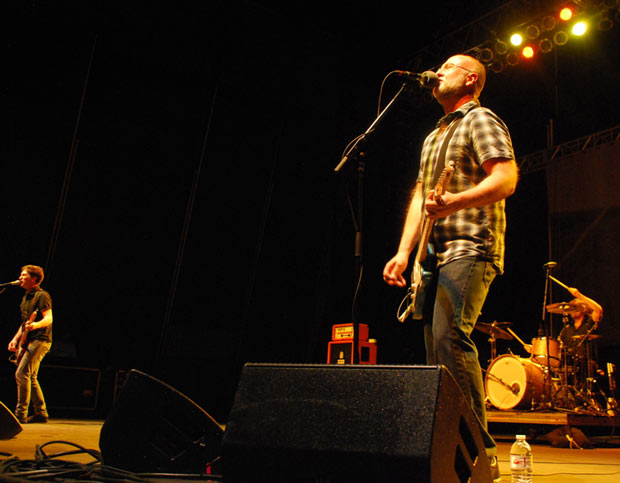 Just less than twenty-five years ago, iconic eighties punk trio Hüsker Dü broke up, with singer/guitarist Bob Mould heading onto a solo career.  Twenty years ago, Mould’s later trio Sugar released their debut, Copper Blue, and it was one of the hallmark albums of the early nineties alternative music boom.  More recently, Mould has released an autobiography (QRO review) and a twentieth anniversary edition of Copper Blue (and following mini-LP, Beaster – QRO review of both), alongside his new solo record, Silver Age (QRO review), which has been getting Mould’s best reviews since, well, Sugar.  And Mould brought Copper Blue, Silver Age, and Hüsker Dü to Brooklyn’s Williamsburg Park for a special free show on Friday, September 7th. 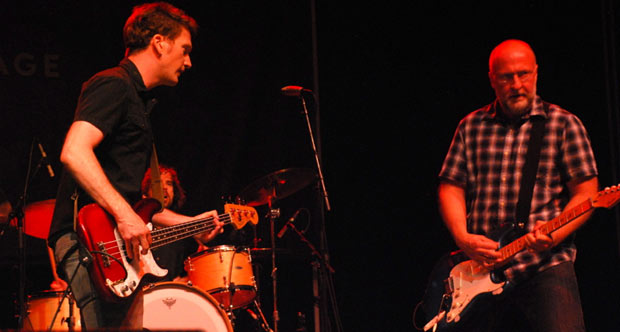 Originally scheduled to be a regular ticketed show at Webster Hall (QRO venue review), the show was moved outdoors to the much bigger Williamsburg Park (QRO venue review) – but was also made free.  Being an outdoor show also meant that it ended early, thus that it started early, and so there weren’t a ton of people there for late-announced opener Cymbals Eat Guitars (including very few photographers – QRO exclusive photos).  Williamsburg Park is also a new venue, having opened less than two months ago as a replacement for Williamsburg Waterfront (QRO venue review) two blocks south, which itself was a pseudo-replacement for McCarren Park Pool (QRO venue review).  At least Williamsburg Park, being a city park like McCarren and not a state park like Waterfront, had no separate ‘beer section’ – even if it wasn’t necessarily a beer-swilling audience (wine was also being sold, all at not-cheap prices), it was an older one for an older artist like Mould. 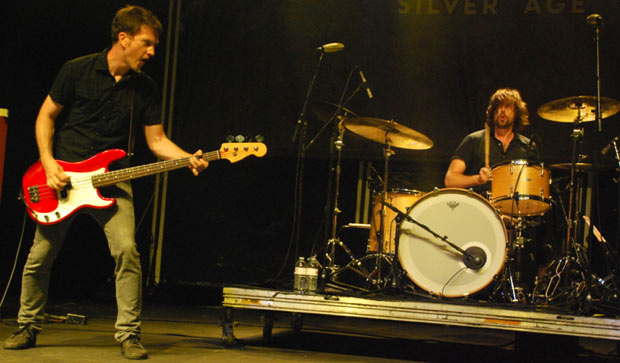 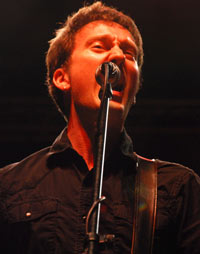 Not that age had in any way slowed down Bob Mould.  He bounded onto the stage and started right into Copper opener “The Act We Act”, playing the entire ten-song record in full.  With his band back down to just a trio with Jason Narducy (Verbana) on bass and Jon Wurster (Superchunk) on drums, they did have some difficulty filling the physical space on the large stage – but not the sonic space of Williamsburg Park, as the Copper Blue rang out across the crowd and over the East River.  What’s more, Mould & co. played it with as much energy as they had back when – Mould giddy at all the appreciation he was receiving, while the younger Narducy & Wurster were just super-jazzed to be playing such an iconic album from their youth.  One could see the look of pure joy on Narducy’s face when he began “A Good Idea” with its killer opening bass line, right up at the lip of the stage, and Wurster sang along to all the songs, even though he wasn’t miked. 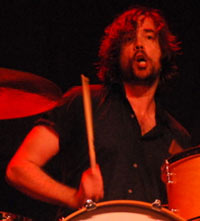 If you know Copper Blue, there’s kind of no point retelling its greatness – just that live it was all you had hoped for, even after all these years.  And if you don’t know Copper Blue, go & get it right now – it’s never too late.  Mould has been playing the album across the country this year, including at Noise Pop Festival and South-by-Southwest (QRO recap), and will later at Fun Fun Fun Fest, but this felt like the biggest & best performance of it in 2012.

Not that the evening ended with Copper‘s wonderful closer “Man On the Moon”.  Following the end of Copper Blue, Mould joked,

Okay, so that was the past, man – that was like twenty years ago.

The funny thing is, a whole lot of that record got written on Richardson Street.  That was back before – before they let bands in the pool.  Lots of barbeques and a lot of mess.  You’ve really fixed the neighborhood up, thank you. 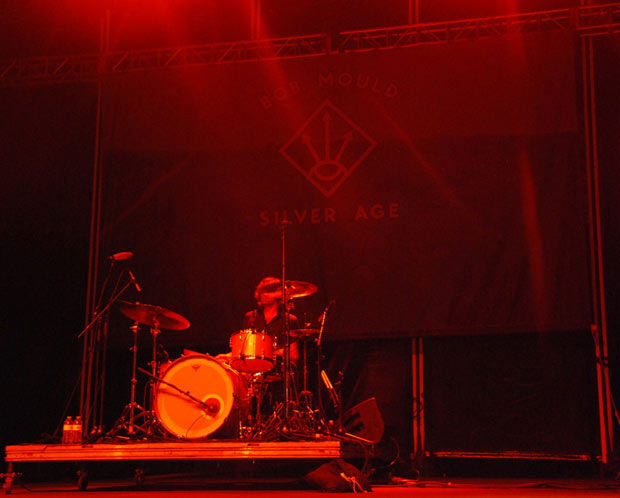 Then, after exclaiming amazement at the huge Silver Age banner behind Wurster (this was the first time he’d seen the “crazy-ass thing … I feel like a rock star all of sudden…”), Mould rather sheepishly said that he had a new album out, asked the crowd if they liked it, and then played three songs from Silver, “Star Machine”, “Briefest Moment”, and “Round the City Square”.  Of course, they couldn’t be as great as the time-tested Copper, but one could tell how Sugar-like they were (after Mould’s prior, less-appreciated foray into electronica, plus his getting-a-bit-repetitive acoustic).  Though how can you play off the new album and not play the title track? 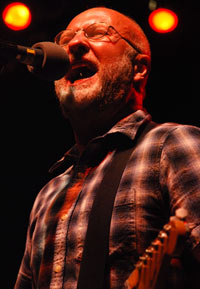 As great as Sugar was, it was still Mould’s second-greatest band, after Hüsker Dü (QRO spotlight on) – that’s no knock on Sugar, whose only real problem was its short life (two full-lengths & a mini-LP), but rather that there are precious few bands ever as good as Hüsker Dü.  Still, from the moment Mould announced he was touring Copper Blue, you know there were music snobs complaining that he wasn’t touring classic Hüsker records like Zen Arcade or Warehouse: Songs & Stories (never mind that half of the songs on both double-albums were written by singer/drummer Grant Hart – QRO interview).  And all those music snobs probably said that the Copper tour was just to get interest & attention to Silver (which it has) – and they would have felt smugly proud of themselves once Mould shifted from Copper to Silver at Williamsburg Park.

But then Mould unleashed the Hüsker.

It wasn’t just one or two Hüsker songs that he always plays amid other solo material.  Mould & co. ripped through a whole bunch of Hüsker pieces back-to-back-to-back-and-more.  There was Warehouse single “Could You Be the One?”, the closest that band ever had to a ‘hit single’, from the final Hüsker studio album.  There was the heartfelt “Hardly Getting Over It”, raised into rock.  Mould went into the encore break with Zen Arcade‘s amazing “Chartered Trips”, and before it you got to not only see forty-somethings moshing (or ‘slam-dancing’, as it was called in the eighties), but to a song called “I Apologize” – for all of Hüsker’s punk rock sound, it was always tempered with honesty in spirit.

Bob Mould Band playing Hüsker Dü’s “Could You Be the One?” live at Williamsburg Park in Brooklyn, NY on September 7th, 2012:

Mould & co. returned to the stage for another Zen piece, opener “Something I Learned Today”, and perhaps the idea of singing two songs from the point of view of a teenage runaway was too much for the Silver-haired Mould (well, what hair he has is silver…), as he invited Craig Finn of The Hold Steady (QRO live review) on stage to sing “Something”.  However, Finn’s not much younger – certainly not a teenager, though his fans might be – and he can’t hold a candle to Mould.  But Bob Mould has had a tradition in recent years of favoring bands that are just watered down, wanna-be versions of him – The Hold Steady, No Age (QRO live review), Foo Fighters (QRO album review, with Mould guest-spot), etc.  And Finn didn’t do a bad job, since he couldn’t talk-sing “Something” like he does with his own material, but his excitement at singing the piece on stage with Mould did go against the song’s actual dark outlook.

Bob Mould Band playing Hüsker Dü’s “Hardly Getting Over It” live at Williamsburg Park in Brooklyn, NY on September 7th, 2012:

Mould reached back farther into his past for early hardcore track “In a Free Land”, from Hüsker’s debut Everything Falls Apart EP, and he & the rest left the stage again – only to return one more time, because a Bob Mould show without Hüsker’s “Makes No Sense At All” well… makes no sense at all.

Bob Mould may be over fifty, but he shows no signs of aging (and is in killer shape).  Copper Blue might be two decades old, but its still as powerful live as it ever was.  Silver Age might be brand-new, but it still fits in with all the classics.  And Hüsker Dü might be long gone, but the songs still rock.  So celebrate the iconic career & energy of Bob Mould.